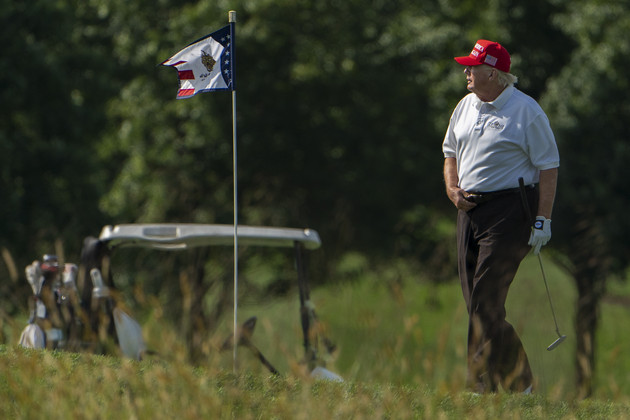 The internet freak-out over Trump’s visit was a rare moment of levity and eye-rolling for a Trump world that has increasingly been consumed by legal problems. | Manuel Balce Ceneta/AP Photo

When former President Donald Trump stepped off his private jet in the Washington, D.C., area on Sunday night, he set off a wave of social media hysteria.

Among the theories: He was turning himself in to the authorities or testifying in front of a grand jury. Some people wondered if he had a secret and sudden health scare, since he was still wearing what appeared to be white golf shoes, and being whisked off to Walter Reed.

In reality, Trump was checking on the status of his golf course in Sterling, Va. With his son, Eric Trump, Trump Organization staff, and the head groundskeeper, they made preparations for a possible future LIV golf tournament. While there, Trump had breakfast with Rep. Byron Donalds, (R-Fla.). He posed for a photo with a smiling member of his congressional staff.

“I can tell you from a good source, the course was in good shape,” said Boris Epshteyn, an adviser to Trump, while on Steve Bannon’s War Room. “The mainstream media loves to degrade MAGA and talk about conspiracy theory this or that, or how MAGA is a bunch of kooks. The next thing you know they get one inkling and they’re writing about what kind of jacket the president is wearing or what shoes he has on. They have tin foil hats from here to Timbuktu.”

The internet freak-out over Trump’s visit was a rare moment of levity and eye-rolling for a Trump world that has increasingly been consumed by swirling legal problems that could threaten their collective future.

Trump’s allies and aides have been left angry and a bit shaken this week over the Department of Justice’s issuance of some 40 subpoenas targeting people in Trump’s inner orbit over their efforts to overturn the results of the 2020 presidential election and their connections to events on Jan. 6. Cell phones were confiscated from at least four people. A few trusted text chains among Trump vets were ignited with speculation about shoes soon to drop, while others went quiet.

“Every day feels like something else is piling on,” said one former Trump official.

Gone, for most in Trump World, was the bravado that this probe too would pass and that the 45th president would emerge stronger. Instead, there was growing anxiety about what could be next, as well as fears that those in the inner circle may flip on their friends to save themselves.

There is speculation that the scope of those targeted is much larger, with some close to Trump suggesting that the number of subpoenas issued is between 50 and 75. There is, in addition, growing fear that the very people who are being tasked to help deflect some of the legal heat that Trump is under for a variety of investigations — chief among them, his handling of classified material at his home in Mar-a-Lago — could potentially be in legal trouble themselves.

The ongoing legal battles have had a unifying effect among many in Trump’s base, and those close to Trump felt bolstered by the hiring of a more experienced legal team.

There have been elements of defiance, with some of the most important Trump figures — including his sons Don Jr. and Eric — charging that the legal pressure was due to a Democratic conspiracy that would backfire at the ballot box this November and in 2024. And Trump allies and some of those who were targeted by the subpoenas have continued to bang the drums, primarily on conservative media.

“I have no trust, confidence, anything with regards to the DOJ and FBI leadership,” said former New York City Police Commissioner Bernard Kerik, who was one of the dozens of Trump allies who received a subpoena, on Newsmax. “Based on the subpoena, based on the targeting of everyone around Trump, including his lawyers – they have targeted every single one of President Trump’s attorneys. That’s insane.”

Still, in some circles of Trump’s broad universe, there is a sense that people are going quiet as the DOJ’s microscope has intensified — a reticence atypical for a group whose default posture is usually to throw haymakers.

“I think the silence has been deafening because usually the default is attack, attack, attack, and I’ve not seen much of that and it’s not to the usual level,” said a former Trump campaign official.

Others have privately questioned the timing of the DOJ’s subpoenas, arguing that it is in a hasty effort to complete an investigation before Republicans potentially take back the House and have an opportunity to try to sabotage their efforts. The wave of subpoenas comes as the Justice Department is working ahead of a so-called “60 day rule,” an unofficial tradition in which it avoids making any moves that could impact an upcoming election.

“Just days ago, Joe Biden used an official Presidential Address to label Trump supporters as a ‘threat’ to democracy. Now, his weaponized and politicized Justice Department is casting a blind net to intimidate and silence Republicans who are fighting for his America First agenda,” said Trump spokesperson Taylor Budowich in a statement. “These are dark times for our nation – a nation in deep decline under Democrat control – but all hope is not lost, and these radical, third world tactics will not stop President Trump from Making America Great Again.”

Trump, for his part, has done few media appearances, choosing instead to keep to smaller, private affairs for now. He called into a small rally for Jan. 6 prisoners at the Washington, D.C., jail on Tuesday night and said he was working to help defendants. He has made plans for upcoming Save America events, including fundraisers and rallies in Ohio and North Carolina. He has continued to play golf and hob-nob with allies at Bedminster, his club in New Jersey. And he has been active on Truth Social where he has suggested those subpoenaed by the DOJ were “targeted and harassed” in retaliation for the defeat of Rep. Liz Cheney (R-Wyo.).

One person who spoke to the ex-president earlier this month recalled him going after his usual bete noires. He had choice words for Senate Minority Leader Mitch McConnell, who he has openly called for ousting from his leadership post. As for Bill Barr, his former Attorney General who has been an outspoken critic of his handling of presidential records — even suggesting an indictment might be near — Trump brushed him off at Bedminster as “the fat guy who orders two hamburgers.”

The president, the person said, was happy that his poll numbers have trended up among Republican voters since the FBI seized documents from Mar-a-Lago. But among Trump’s political advisers, there is a near-universal sense that he is unlikely to pull the trigger on a 2024 announcement before the midterms: there is simply no reason to prematurely announce. After all, his late summer legal battles have effectively unified his base.

During an interview last week with New Dehli TV at Bedminster, Trump said he will make a decision in the “near future.” And when asked if he himself is now “the Republican Party,” agreed.

“I guess based on the poll numbers, I’d have to agree, because we blow everybody away.”

The secret’s out: Pentagon unveils its newest stealth bomber