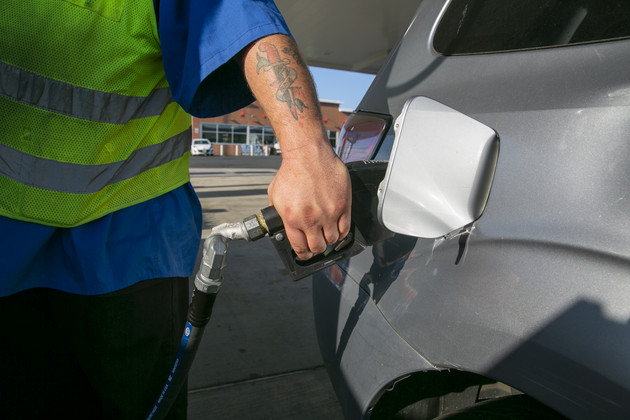 A gas station employee pumps gas into a vehicle at a Sunoco station. | Ted Shaffrey/AP Photo

The Republicans blaming President Joe Biden for sky-high gasoline prices are running into a problem: There may not be enough fuel left in that tank to reach November.

With just over 100 days to go until an election that could end Democratic control of both houses of Congress, it appears that gasoline prices may have peaked too soon to remain the lethal campaign weapon for Republicans that they seemed to be a month ago.

The national average price of a gallon of regular gas has shed more than 70 cents since its peak above $5 a gallon at the beginning of June, falling to $4.30 as of Wednesday. Market analysts generally expect prices to continue to fall through the end of the year, even if they’re likely to remain elevated compared with the pre-pandemic era.

The average price at the pump is still $1.17 per gallon higher than it was a year ago. But Democrats are eagerly embracing the shifting economic tides — and hoping voters pay attention.

“We have some really good news: Gas prices are coming down,” Biden said at a White House meeting last week. “In some cities, it’s down almost a dollar from last month. We’ve been working really hard to bring the price down.”

It’s an open question, though, whether voters will give more weight to the declining fuel prices, or to the fact that they spiked so high to begin with.

One GOP operative acknowledged that the drop could make a difference.

“If the market continues to respond as it has and gets back to year-ago prices, that will definitely blunt the criticism” over inflation, said Chuck Coughlin, a Republican political strategist in Arizona, which has experienced some of the highest inflation in the country. He said a decline to last year’s fuel prices may even “be in reach by early October when early ballots drop for the general” election.

For now, the decrease in energy prices may offer Democrats a respite from GOP attack ads on inflation.

The U.S. benchmark oil price is forecast to fall to an average of $90 a barrel for the second half of this year compared with $101.35
in the first half, RBN Energy analyst John Auers said. This would drag gasoline prices lower than they are now, barring a major upset in oil markets already roiled by factors including supply chain crunches and the Russian war in Ukraine.

“We had several rocks thrown in the pond earlier this year,” Auers said in an interview about the disruptions to the oil markets. “The ripples have subsided, though someone could throw another rock.”

The Biden administration has sought to blame high gasoline prices on Russian President Vladimir Putin and on oil companies’ profiteering. But the reasons are more complicated, according to market analysts.

Fuel demand, which had cratered in 2020 as the Covid pandemic kept people at home, bounced back much more quickly than oil companies could keep up with. The United States and its allies then sanctioned Russia’s oil and financial industries after its invasion of Ukraine, scrambling global energy trade and making oil more expensive.

But oil prices have retreated more than 20 percent since hitting a peak in early June as crude production in the U.S. ramped up — partly helped by the Biden administration’s approval of permits to drill on federal land — and amid fears that countries around the globe could slide into a recession that saps demand for fuel. Russia has also been able to export more of its oil to China and India, keeping the market better supplied than analysts had first expected.

But the White House has also leaned hard on the idea that the administration deserves major credit for the recent price reversal. The Treasury Department issued a news release Tuesday crediting the release of millions of barrels of oil from the Strategic Petroleum Reserve with helping calm markets, saying the additional supplies from the U.S. and foreign allies’ stockpiles reduced gasoline prices by between 17 and 42 cents a gallon.

“Gas prices are down EVERY day this summer so far — consumers are spending about $2 billion less on gas this week than they were in early June. Why?” White House chief of staff Ron Klain wrote on Twitter.

Rep. Eric Swalwell (D-Calif.) also took to Twitter to highlight the price slide, despite residents of his state paying an average of $5.70 a gallon, the highest level in the country. Last week, Sen. Angus King, an Independent from Maine who caucuses with the Democrats, challenged Senate Energy ranking member John Barrasso (R-Wyo.) on Republicans’ messaging going into the fall.

“Gas prices have gone down 40 cents in the past month,” King asked Barrasso during a committee hearing. “Does the Biden administration get to take credit for that? Or do they only get blame when they go up?”

Barrasso shot back that prices were falling because the expense was causing fewer people to fill up their tanks.

The more prices fall before election day, the better Democrats should feel about their chances, said Jake McCook, a Democratic political strategist in New Mexico, a state with a booming oil industry and below-average gasoline prices.

“They’re going to look at the price the week before or month before the election and make their decision off that,” McCook said. “I think Republicans are overplaying their hand on inflation and gas prices. I don’t think people are going to buy it. It’s a little early to crystal ball the midterms, but I don’t think this issue is going to be as number one as people think.”

Still, Democrats downplay the issue at their own risk, said Republican political strategist David Kochel. Even if the country isn’t technically in a recession, gasoline prices remain much higher than they did when Biden took office and voters still feel the pinch of inflation eating away at wage gains.

“Republicans will stick to their guns,” Kochel said. “It’s the number one issue ahead of everything else — the price of groceries and gasoline and the economy overall. [Voters] know what is happening to their pocketbooks in this economy.”

Montana Republican Sen. Steve Daines, who is not up for reelection this year, also took on the administration’s new messaging.

“Biden now claiming $4.32 for a gallon of gas as a victory for American families shows how out of touch he is with reality,” Daines tweeted on Tuesday.

And the politics of the price decrease remains tricky for Democrats, too. John Fetterman, the Democratic Pennsylvania lieutenant governor running for Senate in a state that’s one of the largest producers of natural gas, sent out a news release hours after Klain’s tweet bemoaning the price he and his wife had to pay to fill up their own tanks.

“This weekend when Gisele and I were running errands, I stopped to fill up the tank of my Dodge RAM,” Fetterman said in his release. “It cost me $106.86.”

He added: “I see a lot of politicians talking about how gas prices have been declining, but gas in PA still costs over $4 a gallon, and these gas companies are still making record profits. We need lower prices now, and we need to take action. … We need leaders who will suspend the federal gas tax and go after the corporations that are ripping us off.”