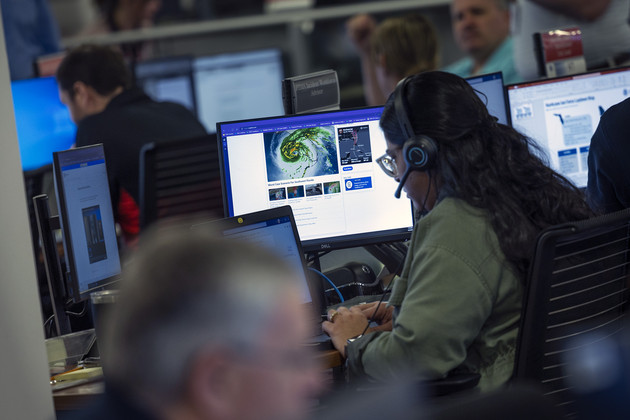 The IRS has a surprising side gig when disasters like Hurricane Ian strike: answering victims’ phone calls.

Because the agency boasts the largest call center in the federal government, it lends hundreds or thousands of customer service representatives to FEMA when hurricanes, wildfires, floods and other natural disasters hit. It’s a situation some find ironic given the IRS’s well-publicized struggles answering phone inquiries about taxes.

Back in 2005, in the wake of hurricanes Katrina and Rita, IRS officials figured they handled more than half the calls that came into FEMA.

Now the IRS is deploying more than 400 people to help with Ian, mostly to respond to victims’ inquiries. It has also sent a contingent from its criminal investigations unit to Florida to help provide security for medical teams working there.

“When areas of the country face natural disasters, IRS employees routinely answer the call to go above and beyond their regular jobs,” said Natasha Sarin, counselor for tax policy and implementation at the Treasury Department.

It’s one of the more far-flung jobs the agency is asked to do that has little connection to its core job of administering the tax code.

Assisting disaster victims is a point of pride for many at the IRS — although it has raised some eyebrows when many taxpayers have trouble getting someone on the phone at the agency for their tax questions.

It also may be awkward this political season for Republicans who’ve been harshly critical of the department in the wake of an historic $80 billion cash infusion Democrats recently pushed through as part of their climate, health care and tax legislation.

Among them: Sen. Rick Scott (R-Fla.), who in August penned an open letter accusing it of plotting to build a “super police” ready to kill average Americans over their taxes. His constituents are now being aided by the IRS.

Scott is “grateful for every American at the local, state and federal level who is working on response and recovery efforts,” said his spokesman McKinley Lewis in a statement.

“None of that changes his opposition” to Democrats’ plans to beef up the agency, which Lewis called “detached from the wants and needs of the American people.”

Republicans say repealing the IRS funding will be the first thing they do should they win back power in November, though legislation unveiled Friday would leave untouched the portion of the money Democrats earmarked for taxpayer services.

The IRS has been assisting FEMA for decades, so long that employees are cross trained in how to handle disaster-related questions. It’s not just because the IRS has so many customer service representatives standing by.

For example, small business owners often need tax details to apply for loans from the government, which they may not have if their business was destroyed.

“In order to get SBA loans, people need copies of their tax transcripts,” she said, referring to the Small Business Administration.

The IRS says it helped out last year in two dozen disasters; since 2012, it figures it has answered 1.6 million related calls.

But the arrangement has drawn fire in the wake of the IRS’s inability to answer many people’s tax questions.

Just 11 percent of callers were able to get someone on the phone last year, according to the National Taxpayer Advocate, and those who got through had to wait an average of 23 minutes.

IRS Commissioner Chuck Rettig said last year he deployed as many as 3,000 of the agency’s 15,000 customer service representatives during disasters.

Some tax practitioners say they are having trouble reaching the agency right now, ahead of the Oct. 17 deadline for people who requested filing extensions, and wonder if Hurricane Ian is part of the reason.

With climate change making natural disasters more common, Olson questions how much longer the IRS’s arrangement with FEMA can last.

“You’re doing a great public service for FEMA but what about the taxpayers of the United States who can’t get through?” she says.

“It’s no longer a good use of the IRS to do another agency’s work when you’re seeing the level of natural disasters we’re having.”

FEMA should take over the job over fielding calls from victims, she says.

But those complaints come even as Biden administration is now in the thick of a major effort to shore up the IRS’s ability to respond to the public.

The agency got a nine percent budget increase earlier this year to improve taxpayer services and hired 5,000 people to help answer the phone.

That was before the $80 billion Democrats pushed through, which includes another $1.9 billion to improve service. The administration announced last month it will hire another 5,000 people to answer the phone, promising 85 percent of callers will get through next filing season. Average wait times will be cut to 15 minutes, it says.

“The IRS has already been working to staff up to meet those objectives — to enter next filing season with more customer service representatives available to answer the phones than at any time in its history,” said Sarin.

Trump judges are on a tear