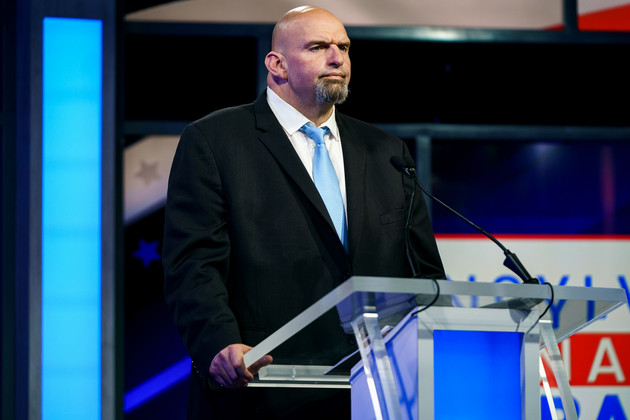 In public, Democratic leaders are projecting confidence that John Fetterman can still win the Pennsylvania Senate race after a shaky debate. In private, some in the party are fretting that his health struggles could cost them a critical seat.

The lieutenant governor’s debate with celebrity doctor Mehmet Oz on Tuesday made for a difficult night for Democrats: As the two candidates fought over abortion and the minimum wage, Fetterman sometimes struggled to communicate — missing words, pausing awkwardly and occasionally having a hard time finishing sentences. The episode injected new uncertainty in a swing state that could determine the balance of power in the Senate.

With so much on the line, Democrats at the highest levels defended Fetterman, arguing that voters care more about authenticity than verbal stumbles. Fetterman’s lead has shrunk in recent weeks, and the race is now a toss-up.

Sen. Gary Peters (D-Mich.), the chair of the party’s campaign committee, praised Fetterman for going through with the debate rather than backing out: “It was good he did the debate. Because I believe he won, particularly with the major gaffe Dr. Oz made” on abortion.

“He’s recovering from a stroke and that takes time to recover, but I think the important thing was what he said, it’s not how he said it,” Peters said in an interview. “I have no question that John Fetterman, when he wins, will also be an outstanding senator.

Behind the scenes, however, some Democrats are second-guessing Fetterman’s decision to participate. Some even questioned whether Fetterman should have stayed in the race in the immediate aftermath of his May stroke.

“I feel bad saying this,” said a Pennsylvania Democratic official, “but if he does go on to lose by a very close margin, and then we lose the Senate 51-49 … that decision will really be reexamined.”

For his part, Peters said he had no regrets about Fetterman remaining the party’s nominee after the stroke. And rather than Fetterman’s communication issues, Democrats believe the most lasting moment will be Oz’s remark that “women, doctors, local political leaders” should make decisions about abortion policy.

“Oz lost the debate when he told Pennsylvania voters that women should have to get permission from politicians like Doug Mastriano before they can get an abortion,” Senate Majority Leader Chuck Schumer told POLITICO, pointing to the state’s GOP gubernatorial nominee.

Republicans were harsh in their assessment. Sen. Ted Cruz (R-Texas) said in an interview that the whole episode was “stunningly painful” to watch.

“Every person I’ve talked to is flabbergasted that the Fetterman campaign allowed him to debate in such an obvious condition of impairment. I don’t know how anybody objectively could watch that performance and conclude anything other than: This guy can’t possibly do this job,” Cruz said.

The Oz campaign, however, stuck to policy. Brittany Yanick, a spokesperson for Oz, said “that John Fetterman couldn’t defend a single one of his radical positions” and clarified that unlike Mastriano, Oz is in favor of some abortion exemptions.

Larry Ceisler, a Pennsylvania-based public affairs consultant who has experience preparing Democratic candidates for debates, said he has seen Fetterman speak in person coherently since his stroke. But Fetterman seemed unable to defend himself in the stressful situation or properly manage the parts of the debate that were in his control, Ceisler said.

Looking to shift attention onto Oz, the Fetterman campaign announced almost immediately it would air the TV ad highlighting Oz’s comments on abortion. The Democrat’s team also revealed Wednesday that it raised more than $2 million since the debate. As progressives circulated the clip of Oz online on Twitter, it racked up nearly 6 million views by Wednesday afternoon.

Fetterman adviser Rebecca Katz sought to downplay concerns among Democrats, arguing that “the fact that he is still standing and doing as well as he is in this race is due to his connection with real Pennsylvanians.”

“I know there’s some — I’ll be a little bit graphic here — Democratic bedwetting out there, which is often typical of Democratic commentators and officials,” said Pennsylvania Democratic Sen. Bob Casey, a top surrogate for Fetterman. “Let’s refrain from bedwetting and get the vote out.”

Former President Donald Trump’s super PAC, MAGA Inc., is already out with an ad highlighting one of Fetterman’s verbal stumbles, declaring that Fetterman “just isn’t right.” A Republican official said the party may further highlight Fetterman’s confusing debate answer on his past opposition to fracking.

Pennsylvania is Democrats’ best opportunity to pick up a GOP-held seat this year. If Democrats can carry Pennsylvania, it would make holding onto their slim 50-50 majority that much easier.

JB Poersch, president of the Schumer-aligned Senate Majority PAC, made clear that his group is not changing its plans to spend millions to promote Fetterman in the final weeks of the race. He said that “Oz confirmed the worst fears of voters” with his answer on abortion.

Pennsylvania was a bright spot for Democrats this summer, but they have slowly grown less confident about the state’s Senate race in recent weeks. Still, it remains a cornerstone of their political strategy.

“Your average voter is going to look at a simple thing: Which of these two guys, Fetterman or Oz, gets them and will fight for them? And they’re going to conclude that Fetterman got knocked down, he’s gotten back up,” said Sen. Chris Coons (D-Del.). “Nothing about that debate will change the outcome.”

There is some precedent for how survivors of major health incidents weather Senate races. Former Sen. Tim Johnson (D-S.D.) suffered a brain hemorrhage in 2006 but won re-election in 2008, while former Sen. Mark Kirk (R-Ill.) lost his re-election campaign in 2016 after suffering a stroke in 2012. And former Missouri Gov. Mel Carnahan (D) won a 2000 Senate race after dying in a plane crash.

Though many Democrats still believe Fetterman will eke out a win, there is some internal Democratic hand-wringing over whether party leaders should have urged him to suspend his campaign months ago. Democrats had until mid-August to replace Fetterman on the ballot through the Department of State in the event that he ended his bid.

One Pennsylvania Democratic insider compared the situation to GOP officials’ inability to stop Mastriano from capturing the gubernatorial nomination, despite their fears that he would lose the general election. Fetterman won the primary by more than 32 percentage points, carrying every county, just days after suffering a stroke.

“The Democratic establishment in Pennsylvania could not say to John Fetterman: ‘Are you going to be capable of running? And show me your medical records. And if not, you need to drop out,’” the person said.

Casey said such a move would have undermined “the will of the people” and that Fetterman made “the right decision.”

“We’re going to in our infinite wisdom as political leaders pluck someone and put them in as a nominee? There would have been an overwhelmingly adverse reaction to that,” he said. “John’s going to win.”