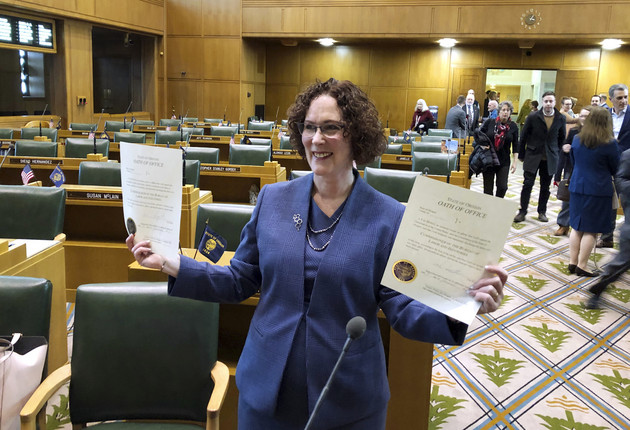 Oregon Labor Commissioner Val Hoyle shows her oath of office after she signed it after her inauguration at the state Capitol in Salem, Ore., Jan. 7, 2019. | Andrew Selsky/AP Photo

A round of new internal polling is giving the GOP fresh optimism that the House battleground map is stretching even more favorably in their direction.

Four surveys conducted in late July reveal close races in open seats in Oregon, Colorado and California that President Joe Biden carried by between 11 and 15 points in 2020. Taken all together, GOP operatives view the data as a sign that Biden’s sinking approval numbers could drag Democratic candidates down enough to bring deep blue turf into reach.

The voter registration and partisan lean of the districts all strongly favor Democrats, and it will be a heavy lift for Republicans to flip any of these seats. Moreover, the only polling available in the districts are internal Republican figures, which can sometimes be rosier than reality for the party.

But the numbers comport with general assessments about the state of the House map from strategists of both parties, as well as the close results of the 2021 statewide elections in New Jersey and Virginia. Altogether, the tightening polls suggest that some super-blue seats could be in play in November, which would mean Democrats may have to expend precious resources there on defense — especially because they lack well-funded incumbents.

The most encouraging poll for Republicans came in Oregon’s new 6th District, where Republican Mike Erickson led Democratic state Rep. Andrea Salinas by 7 points, 47 percent to 40 percent, with 13 percent undecided. In a district that Biden won by nearly 14 points, his approval rating is underwater by 20 points. Republicans lead on a generic ballot by 7 points — a rough reality for a seat that Democrats drew to be safe.

Erickson, a supply chain logistics consultant, has poured some of his own money into the race: He raked in $1.1 million in the second quarter, compared to Salinas’ $800,000. The survey of 400 likely voters was conducted July 26-28 by Cygnal for the Erickson campaign and the National Republican Campaign Committee, contacting voters via live calls and text-to-web. The margin of error was plus or minus 4.9 percentage points.

Oregon has turned into a surprising pressure point for Democrats, who are defending three open seats in the state. The most at-risk district is the one that Democratic Rep. Kurt Schrader lost in a May primary. Now, a more progressive Democrat is defending the turf against a credible GOP candidate in a seat Biden won by 9 points.

Still, Democrats feel confident in their ability to retain these seats, citing Kansans’ recent endorsement of abortion rights at the ballot box as a sign that voters have soured on the GOP and its agenda. And Democrats pushed back on the Republican poll of Oregon’s 6th District, citing internal Democratic polling from early July that found a tied race between Salinas and Erickson.

“Voters in Kansas just showed us how toxic the Republican brand is and now House Republicans are shaking in their boots because they’ve got to defend their anti-freedom MAGA agenda,” said DCCC spokesman Chris Hayden. “Democrats are the party of freedom, justice, and putting people over politics.”

Still, Republicans insist the fact that there are deep-blue districts hosting such close polling results show the political environment is continuing to move swiftly in their favor. In Oregon, they also see a path to contesting the district retiring Rep. Peter DeFazio is vacating along the western coast of the state.

A July 25-28 survey of 400 likely voters in DeFazio’s district found a 5-point race, with Democrat Val Hoyle leading Republican Alek Skarlatos, 46 percent to 41 percent, with 13 percent undecided. Skarlatos, a former National Guardsman who thwarted a terrorist attack on a Paris-bound train, is making a second run for the seat that Biden won by 13 points.

Biden is underwater in the district by 16 points, according to the poll, which was conducted by Moore Information for the Skarlatos campaign and the NRCC. The margin of error is plus or minus 5 percentage points and it surveyed 400 likely voters via live calls.

Meanwhile, a mid-July poll from the Congressional Leadership Fund, the top GOP super PAC, found Republican Erik Aadland trailing Democrat Brittany Pettersen by 2 points, 44 percent to 42 percent in an open seat anchored in the Denver suburbs, where Democratic Rep. Ed Perlmutter is retiring. Biden carried the district by 15 points in 2020.

For Republicans, the surveys are also an encouraging sign that they remain competitive in Democratic-leaning seats in the aftermath of the Supreme Court’s decision to overturn Roe v. Wade.

One recent survey of 400 likely voters in an open district in California’s Central Valley found Democrat Adam Gray leading Republican John Duarte by 4 points, 47 percent to 43 percent. Biden is underwater by 9 points (43 percent approval, 52 percent disapproval) in a district he carried by 11 points in 2020. The seat is open post-redistricting because Rep. Josh Harder (D-Calif.) is running in a more Democratic-friendly district nearby.

But that poll also included some good news for Democrats: They are leading on the generic ballot there, 46 percent to 43 percent, and Biden’s approval has ticked up at least somewhat. An internal Duarte campaign poll from May found Biden underwater by 13 points with his disapproval at 39 percent.

The live-caller survey was conducted Aug. 3-7 for the NRCC and the Duarte campaign. The margin of error is plus or minus 4.9 percentage points.