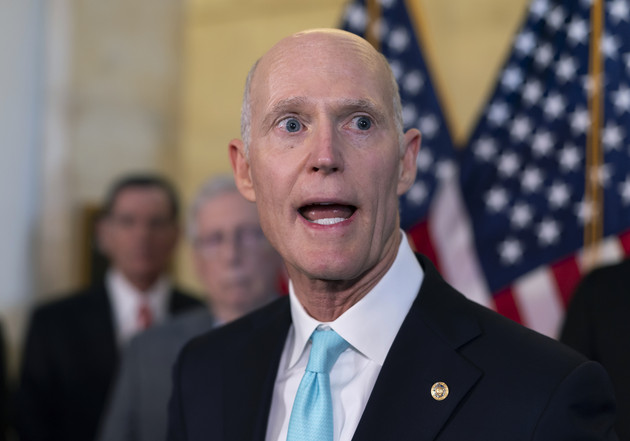 Sen. Rick Scott, who chairs the NRSC, announced earlier this year the campaign committee would be spending sooner than in years past. | J. Scott Applewhite/AP Photo

As midterm election campaigns heat up in the Senate’s top battlegrounds, the National Republican Senatorial Committee is canceling millions of dollars of ad spending, sending GOP campaigns and operatives into a panic and upending the committee’s initial spending plan.

The cuts — totaling roughly $13.5 million since Aug. 1 — come as the Republicans’ Senate campaign committee is being forced to “stretch every dollar we can,” said a person familiar with the NRSC’s deliberations. Republican nominees in critical states like Ohio, Pennsylvania and North Carolina — places the GOP must defend this fall — have failed to raise enough money to get on air themselves, requiring the NRSC to make cuts elsewhere to accommodate.

Since Aug. 1, the NRSC has cut ad buys in the battleground states of Pennsylvania ($7.5 million), Arizona ($3.5 million), Wisconsin ($2.5 million) and Nevada ($1.5 million), according to the ad tracking service AdImpact. Separately, a Democratic source tracking advertising buys estimated roughly $10.5 million in cuts by the NRSC since the first of the month.

“People are asking, ‘What the hell is going on?’” said one Republican strategist working on Senate races. “Why are we cutting in August? I’ve never seen it like this before.”

While the scale of these cuts is unprecedented, the NRSC is also ahead of its typical schedule on its ad spending, having already spent $36.5 million on television spots this cycle, as opposed to the Democratic Senatorial Campaign Committee’s $1.9 million to date. Sen. Rick Scott, who chairs the NRSC, announced earlier this year the campaign committee would be spending sooner than in years past. It was a necessary change, Scott said, to prevent Democrats from having the airwaves to themselves all summer.

“We’ve been creative in how we’re spending our money and will continue to make sure that every dollar spent by the NRSC is done in the most efficient and effective way possible,” said Chris Hartline, NRSC spokesperson. “Nothing has changed about our commitment to winning in all of our target states.”

The person familiar with the NRSC’s deliberations said the committee is swapping some of its independent expenditure spending for coordinated and hybrid spending with campaigns. The latter category imposes more rules on how much can be spent and what the ads can say, though it allows the committee to purchase ad time at a candidate discount, rather than a much steeper outside group rate.

But the numbers show that the NRSC has cut significantly more than it has booked back, indicating a potential cash strain at the committee. Second-quarter filings showed the DSCC had nearly twice the cash on hand as its Republican counterpart, $53.5 million to the NRSC’s $28.5 million.

Another Republican strategist referred to the recent cuts as “unreal,” noting that the NRSC had not eliminated any ad time in New Hampshire, where there won’t be a GOP nominee until mid-September — and where there’s no clear frontrunner in the meantime.

The NRSC earlier this month also spent a combined $1 million on ads in Washington and Colorado, two blue states that are considered unlikely but potential pickup opportunities for Republicans.

While the GOP committee is making a perplexing number of mid-August cuts, the organization could still book back that time over the next 2½ months. And between what the NRSC has already spent on television this cycle and what it has reserved for the rest of fall, the Republican committee has still purchased significantly more than the DSCC, though Democrats will likely reserve more air time in the coming weeks.

“While Rick Scott’s failed leadership of the NRSC continues to be one of Senate Democrats’ greatest assets,” said David Bergstein, spokesperson for the DSCC, “we know McConnell’s super PAC will have significant resources in the weeks ahead and we are continuing to take nothing for granted in each of our battleground races.”

Bergstein was referring to the Senate Leadership Fund, a super PAC aligned with Senate Minority Leader Mitch McConnell that has reserved $150 million in ads this fall. Its first spots begin airing Friday in Pennsylvania.