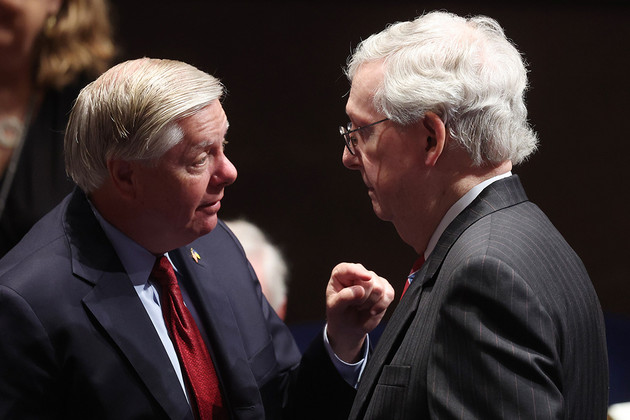 Congressional Republicans are reflexively rejecting the largest climate bill in U.S. history. But some of their allies fear the approach will backfire.

But as the bill heads to the House of Representatives Friday, former GOP lawmakers and Republican allied groups warn the party risks over-reaching and alienating key voting groups such as young people and suburban voters who want climate action in the face of worsening wildfires, droughts and flooding. Such alienation could complicate Republican efforts to retake one or both houses of Congress, they say.

“From a messaging perspective this is a problem for Republicans,” said Quill Robinson, vice president of government affairs at American Conservation Coalition, a youth conservative environmental group. “If they are criticizing this as the Green New Deal, that puts them in a pretty difficult position because process issues and qualms about some substance won’t get through to young people. A lot of them will see this as Republicans opposing climate legislation.”

Senate Minority Leader Mitch McConnell and other Republican leaders have also criticized the partisan process used to pass the bill in the Senate and questioned whether it will effectively reduce global emissions.

“The Republican Party shoots itself in the foot and threatens a lot of progress and growth they’ve made on this issue in recent years by being overly aggressive in criticizing the climate and energy components of this legislation,” said former GOP Rep. Carlos Curbelo of Florida, a vocal proponent of action to address global warming. “A lot of Republicans, if they are honest, will admit that outside the reconciliation process they would have at least seriously considered supporting this legislation.”

Democrats, meanwhile, are betting their legislation will win over voters across the ideological spectrum for supporting a wide range of energy sources — a something-for-everyone approach designed to mute criticism. They also argue the legislation will help address voters’ No. 1 complaint at the moment — inflation — and plan to make that case in the coming months. While mainstream economists generally say the bill will have negligible effects on lowering inflation in the coming year, Democrats are getting a momentary boost from falling gasoline prices and this week’s report showing inflation is slowing after a relentless yearlong surge.

Clean energy tax credits that form the core of Democrats’ bill are one of the few climate policies that have garnered bipartisan support, with both parties working together over the years to provide short-term renewals of subsidies to wind and solar. In lieu of a carbon tax or other penalties on polluters — measures Republicans have fiercely resisted in recent years — Democrats designed the bill to supercharge clean energy deployment by offering billions of dollars of incentives to lower the cost of wind, solar and electric vehicles to make them more accessible to individuals and businesses.

“This is definitely going to look less painful because the idea of getting an incentive is harder for climate opponents to criticize than paying a price,” said Kevin Book, managing director of the research group ClearView Energy Partners.

The bill does impose a penalty on oil and gas companies that emit a certain amount of methane, though the measure is modest, comes with exemptions and offers subsidies to help drillers afford technologies to limit leaks of the potent greenhouse gas. And it increases the royalty rate companies pay to the government for oil and gas produced on federal land, while reinstating the so-called Superfund tax on crude oil and imported petroleum products to fund the cleanup of polluted industrial sites.

Republicans also share an interest in the industrial policy aims of Democrats’ legislation, which provides incentives to help manufacturers stand up domestic supply chains on a number of clean energy fronts, whether that’s making electric batteries or producing solar panels.

The bill expands tax credits for carbon capture systems — a technology solution that Republicans have heaped praise on in the past — that could allow coal- or gas-burning power plants to keep operating with reduced emissions. And it extends new incentives for other nascent technologies Republicans have long favored, like small nuclear reactors and clean hydrogen.

“It’s incomprehensible to me that any of my colleagues would vote against reducing our debt, saving hardworking Americans money or strengthening our energy security,” Manchin tweeted ahead of the bill’s passage in the Senate.

Manchin, a long-time fossil fuel champion, pushed for the inclusion of significant carve-outs to ensure oil and gas production continues. These include requiring the federal government to auction off more public lands and waters for oil drilling as a prerequisite for more renewable energy sources like wind and solar — despite President Joe Biden’s plans to decarbonize the U.S. economy.

The West Virginia senator also secured a commitment from Democratic leadership to pass legislation later this year to speed up energy permitting, which could help companies build oil and gas pipelines more quickly and develop mines to dig up critical minerals. But Republicans such as Sen. Lindsey Graham (R-S.C.) have vowed to oppose Manchin’s permitting reform measures despite them being a long-time GOP priority.

In a split from Republicans, large oil and gas companies such as ExxonMobil and business groups that are usually aligned with the GOP have praised some of these so-called Easter eggs for fossil fuel companies. The Chamber of Commerce supports several clean energy and climate provisions even though it opposes the overall bill.

“This looks a lot different than what we saw in the original Build Back Better bill,” said Marty Durbin, president of the Chamber’s Global Energy Institute. “What ended up being included was very close to policies that have had very strong bipartisan support in Congress. It balances the need of ensuring our own energy security now and that of our allies and accelerates the transition by putting policies in place that will facilitate progress in technologies that will help us reduce emissions.”

Republicans have also taken exception to Democrats’ attaching labor-friendly domestic content and prevailing wage requirements to clean energy incentives, arguing such provisions equate to social policy and could raise the cost of projects.

“To the degree we are going to lower emissions that will be a good thing. Do I think this will be a game changer? No I don’t,” Sen. Bill Cassidy (R-La.) said. “Providing extra payments for using labor unions is a lot of money not going to projects, but to a higher wage base to take care of a Democratic constituency.”

Sen. Kevin Cramer (R-N.D.) criticized Manchin for bailing on bipartisan meetings that the West Virginian convened in the early summer in which centrists discussed ways to address climate change and lower energy prices that spiked after Russia’s invasion of Ukraine. In those meetings, Democrats and Republicans — including Cramer and Cassidy — discussed ideas that Manchin and Schumer ended up agreeing to, such as relaxing permitting rules and providing tax credits to support a bevy of carbon-free clean energy technologies.

“We weren’t going to get to 60 votes, but we probably could have within the next one to two years regardless of the election result this fall,” Cramer said. “The Democrats’ bill really takes all that momentum and turns climate back into a skins vs. shirts game.”

But Democrats counter that they couldn’t afford to wait for Republicans to come around given the urgency of addressing climate change and the political reality that they could lose full control of Congress in November.

“The climate crisis is a real crisis with urgency,” Rep. Jared Huffman (D-Calif.) said. “We can’t wait in geologic time for Republicans to become comfortable with doing something about it. It’s so painfully obvious they were slow-walking and running out the clock.”

Democrats say Republicans will pay politically for their decision to sit out the most significant climate bill in U.S. history, and are hopeful it will inspire turnout from young activists who’ve been demanding Democrats take aggressive action.

“Voters will start to see what we already believe — that this bill will be good for Republican states and help lower their energy prices,” said Sen. Tina Smith (D-Minn.).

But Neil Chatterjee, former chair of the Federal Energy Regulatory Commission who was previously a McConnell aide and supports some of the energy provisions, doesn’t think Republicans will be hurt politically by resisting the bill because its benefits won’t be “realized for years.”

Curbelo, though, said Republicans would be punished for their resistance to passing meaningful climate policy.

“Years from now without question, the climate and clean energy provisions of this bill will be viewed favorably,” Curbelo said.