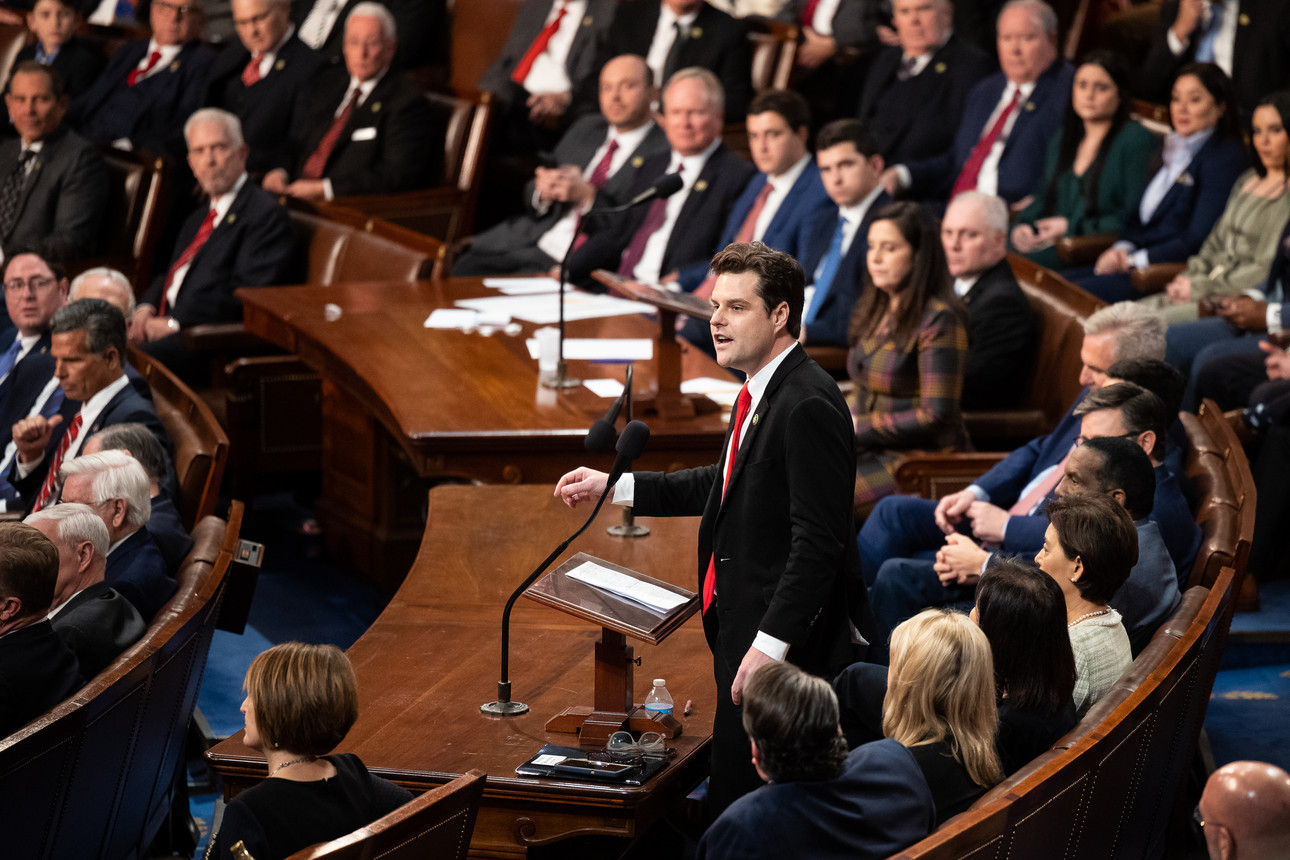 Rep. Matt Gaetz nominates Rep. Jim Jordan to be speaker of the House at the Capitol on Jan. 3, 2023. | Francis Chung/POLITICO

Former Speaker John Boehner once dubbed certain members of the House Freedom Caucus “legislative terrorists.” After Tuesday’s spectacle on the House floor, some GOP members are taking it a step further.

Rep. Don Bacon (R-Neb.) says he’s heard colleagues privately tag the 19 Republicans who repeatedly voted against Rep. Kevin McCarthy (R-Calif.) for speaker the “Taliban 19” — a nickname Rep. Matt Gaetz (R-Fla.) called “hurtful” and “false,” though he added “I too am prepared for an extended battle I will ultimately win.”

It’s just one sign of the overflowing fury toward the group of GOP rebels coursing through many in the House Republican Conference after its members ganged up to deny McCarthy the speakership, leaving the House leaderless as it opens its new two-year session.

“This is an all new level of contempt that the conference has for them. They are beyond redemption,” said Rep. Mike Rogers (R-Ala.), an ally of the GOP leader.

“This is no longer about McCarthy. This is about what they are doing to the conference and the Republican Party,” added Rogers, who earlier Tuesday pledged to try to strip members who vote against McCarthy of their committee assignments.

The GOP leader’s detractors are nearly all housed in the ultra-conservative group, notorious for its rebellious streak. In McCarthy’s first three votes Tuesday, they continuously blocked him from clinching the gavel, even increasing their initial opposition of 19 by one in the final ballot on Jan. 3.

“There’s a lot of anger out there,” Bacon said, adding that the refusal of McCarthy’s opponents to get on board with a majority of the conference “pisses us off.”

Many GOP lawmakers have long viewed their colleagues in the House Freedom Caucus as intractable rabble-rousers. They’ve watched them take down two speakers in a decade, prompt countless intraparty disagreements and rely on unpopular delay tactics to make their point opposing big spending and top-down leadership decisions. But for many Republicans, the failed votes on Tuesday were a new low.

The Freedom Caucus, which has roughly 30 members, is more than its anti-McCarthy dissenters. In fact, the caucus itself is split: Rep. Marjorie Taylor Greene (R-Ga.), for instance, has turned on her fellow conservatives. She called them “destructionists” on Tuesday, for their opposition to McCarthy, and panned it as more of a “prom king” fight than real substance.

Still, the protracted speaker battle has renewed scrutiny of the hardline caucus, with its long-time goal of dragging the party further to the right, just as the GOP slides into its House majority and the midterms signaled a rebuke of former President Donald Trump.

Even some Freedom Caucus members expressed confusion and frustration at how their colleagues are impacting the first day of the new conference. Rep. Randy Weber (R-Texas) said of his fellow members: “Shouldn’t they be thinking about what they are causing?”

The optics for the party are embarrassing, at best, marking a vastly different start from the one many envisioned. The House itself is largely paralyzed as they wait to determine who will be the next speaker. The party that vowed quick action and accountability against the Biden administration is at a halt. And the headlines that will follow will show a GOP in undeniable disarray after years of lobbing that criticism at their Democratic counterparts.

Rep. Dave Joyce (R-Ohio), the head of the Republican Governance Group, observed that McCarthy’s dissenters are different from the original cast of Freedom Caucus members who pushed out other GOP leaders.

One of the members known for causing headaches in the years of Boehner and former Speaker Paul Ryan (R-Wis.), for instance, was Rep. Jim Jordan (R-Ohio) — now a public supporter of McCarthy, even as some of his colleagues repeatedly cast their ballots for him.

“At least when you had Mick Mulvaney and when you had guys like Jim Jordan, they had something that we’re asking for. Here, everything they’ve asked for has been given to them, pretty much,” Joyce said, taking an undisguised jab at House Freedom Caucus Chair Rep. Scott Perry (R-Pa.). “They just don’t want Kevin and it’s not right.”

Republicans started the day with what McCarthy backers hoped could be a come-to-Jesus moment, albeit a tense one, with his opponents during a private conference meeting. But with no sign of the anti-McCarthy levy breaking, that anger was bursting into public view by the third ballot.

“Everybody needs to grow up and get on board,” Rep.-elect Mike Lawler (R-N.Y.) said in an interview. He argued that the voters in his swing district, who had ejected the Democrat’s own campaign chair in electing the first-term Republican, don’t “give a crap about the rules of the House.”

On the first ballot, McCarthy opposers voted for various different members instead of the California Republican, including Reps. Andy Biggs (R-Ariz.) and Jim Jordan (R-Ohio). But in subsequent ballots, all 19 members pivoted to Jordan and also added one to their ranks in the third ballot: Rep. Byron Donalds (R-Fla.) who had supported McCarthy during the first two ballots.

At least one of the no votes, Rep.-elect Andy Ogles (R-Tenn.), flipped after previously stating support for McCarthy. He told POLITICO in September that McCarthy had “earned the right to lead the caucus” and that the Tennessean would back the GOP leader.

Meanwhile, some House Republicans mused whether Jordan was doing enough to tamp down his 20-member fan club, even as he repeatedly stated he wasn’t encouraging this outside support and publicly encouraged members to vote for McCarthy.

Some McCarthy allies pointed to the conference meeting ahead of the floor vote as evidence the GOP leader is fed up. The Californian took an impassioned — and at times, fiery — approach to the members threatening to derail his speakership bid. As one House Republican put it: He “made it about standing up to the Freedom Caucus now or they will do this on every major vote.”

The stalemate has sparked warnings from McCarthy supporters that it could inadvertently fuel a plan — one in its early stages — between centrist Republicans and Democrats to try to cut a deal and elect a more moderate Republican as speaker. Some centrist Democrats have even begun to privately discuss a possible “power sharing” agreement.

Rep. Dan Crenshaw (R-Texas) warned the longshot plan could gain traction as conservatives continue to block McCarthy. He added there were “plenty of” GOP lawmakers who will take the step if the California Republican falters.

“These 19, or now 20 [McCarthy opponents], that are foolish enough to go down this path, it’s a suicidal path. It will get Biden reelected in 2024. That’s how stupid their strategy is,” Crenshaw said.

Not all members’ tempers have flared, at least not yet. Rep. Dusty Johnson (R-S.D.), chair of the Republican Main Street Caucus, said he believes most rank-and-file members “aren’t angry with the holdouts,” but they are “exasperated.”

“The holdouts have used their leverage to gain a lot of worthwhile concessions, and I think they’ve secured two-thirds of a loaf. That’s a pretty good deal where I come from. They should stop fighting and declare victory,” he told POLITICO as the House was in the midst of its third speakership ballot.

But the anger may grow as the speakership battle enters a second day. Members are frequently questioning how long it can last.

Rep. Ralph Norman (R-S.C.), one of the original McCarthy detractors, offered his own assessment while leaving the House floor, saying that if needed, he could go “six more months.”

Reef fish must relearn the

Trump judges are on a tear