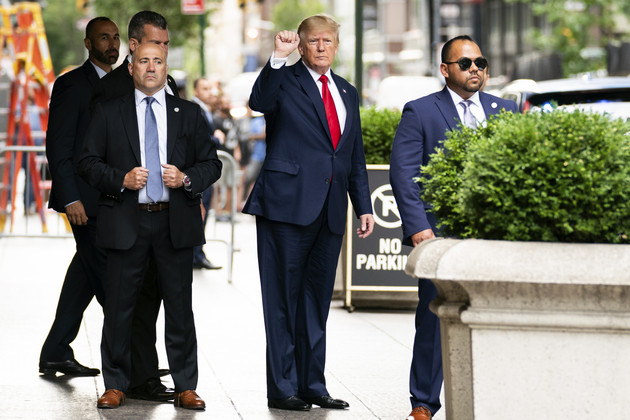 Former President Donald Trump gestures as he departs Trump Tower, Wednesday, Aug. 10, in New York, on his way to the New York attorney general's office for a deposition in a civil investigation. | Julia Nikhinson/AP Photo

As he finds himself, once more, in legal jeopardy—standing at the epicenter of a media storm of his own making, his political future changing course in real time—Donald Trump has done what Donald Trump likes to do.

He’s played golf, engaged in a bit of politicking, and mingled with friends and guests at his Bedminster golf club.

The stakes may be high for the ex-president, but Trump is carrying on with his usual summer calendar.

In the weeks since the FBI’s search of his Palm Beach estate, Trump has mostly worked out of his office at Bedminster where he has held meetings with aides and lawyers. He appeared at political fundraisers for Republican congressman Jeff Van Drew (R-N.J.) and Michigan secretary of state candidate Kristina Karamo — which featured a performance by country singer Coffey Anderson, aka “Mr. Red White and Blue”— hosted a dinner of Republican lawmakers, given a pep talk at his club’s caddie-member golf tournament, played rounds of golf with a rotating circle of friends, and celebrated his defeat of Rep. Liz Cheney in the Wyoming GOP primary with club guests.

He begrudgingly made a trip into New York City for AG Leticia James’ investigation and he memorialized former Japanese prime minister Shinzo Abe in a video message for a gathering of the Unification Church in South Korea, the church started by Rev. Sun Myung Moon, the Korean religious leader who bankrolled conservative causes in the U.S. And every day he has dialed up allies and members of Congress, fired off a steady stream of angry posts and shared friendly articles from his social media account on Truth Social, and dined on the patio of Bedminster.

GOP officials, aides and media personalities who have spoken to him say Trump is frustrated but “cheerful.” He has looked for help to bolster his legal team but found no takers. At the same time, he has reveled in seeing parades of MAGA supporters in front of his properties, as well as Fox News pundits and Republican members of Congress largely rushing to his defense. He also has been buoyed by the belief that the FBI’s search of his home will benefit him politically. His political action committee has raised prodigiously off of the matter — dashing off at least 22 fundraising emails with the word “raided” in them since the search happened on Aug. 8.

One thing Trump hasn’t done much of since the FBI search is appear in public. While aides and family members have hit the television circuit, Trump has not. He gave one brief interview to Fox News digital and his first public appearance since the search isn’t until early September, when he holds a Save America rally in Scranton, Pennsylvania.

Trump’s response to the FBI search is, to a degree, a reflection of his current station in politics. He has been in political vise grips before. And even though his own circle of advisers and allies recognize that the man famous for getting himself ensnared in nasty legal entanglements is suddenly in uncharted waters, there is a sense that this, too, can be navigated.

“I don’t think anyone truly believes he’s in legal jeopardy,” said one person close to Trump’s operation. “They see this as just another headache to deal with and it’s an unnecessary issue when they could be focused on other things like preparing for a potential run.”

Trump has not been entirely nonchalant about the legal dramas engulfing him. His group of lawyers have filed suits demanding that a special master be appointed to go through the materials seized by the FBI to ensure that nothing privileged is taken. Trump himself has angrily accused the feds of confiscating his passports during their search (correspondence later showed they did take the passports but returned them).

But people who have spoken to the ex-president say his mind is also more firmly on tending to his political movement and his own electoral future. In private, he has bragged about updates to his private plane and he has discussed his own plans for 2024. And, according to multiple people familiar with Trump’s political plans, there has even been discussion of creating a new super PAC.

“He was upbeat, not downbeat. He wasn’t deterred by it, he expressed more disdain for what they did to his family more than what they did to him, searching Melania’s closet and going after his kids,” said a person who was at the Republican Study Committee member dinner with Trump the day after the FBI search. “[The search] was a major discussion at the beginning of the dinner but he definitely wasn’t obsessed.”

Though he is under investigation for alleged crimes under the Espionage Act, Trump has leaned into the search of Mar-a-Lago as a political boost. Privately, there is a belief that the events will rally conservatives to his side and serve as an effective frame for a future run: placing him directly as a target of a Biden-overseen Department of Justice. He has been warned by advisers that it is still unclear where the FBI’s investigation may lead, but has nevertheless leaned into the now-traditional role he plays, that of Deep State victim.

“All polls STRONGLY indicate that I am the candidate that Democrats LEAST want to run against, by far, hence the politically motivated Raid on Mar-a- Lago – Which has backfired, big time!” Trump posted to Truth Social.

The results, at least politically, have encouraged Trump. He has seen a boost in polls with regards to a potential 2024 primary. A recent poll by St. Anselm College in New Hampshire showed him with a 20 point lead over potential rivals, including Florida Gov. Ron DeSantis. And an NBC News poll released on Sunday showed that while overall, a majority of American voters think investigations into Trump should continue, Trump’s support within the Republican Party has jumped by 7 percentage points since the search.

But while Trump’s enjoyed a boost in his standing within the party, he’s not reveled in it publicly; at least not yet. Trump has hosted tele-rallies in support of candidates and does plan to hold a Save America rally in Scranton, Pa., in support of two of his endorsed candidates: Senate nominee Mehmet Oz for Senate and gubernatorial hopeful Doug Mastriano, both of whom are lagging in their races. Trump is expected to hold more rallies leading up to the midterm elections.

The question awaiting everyone is whether — or when — he will hold a rally for his own run.

People around Trump believe a 2024 bid is a certainty at this juncture. But while the FBI drama hasn’t changed everything in Trump world, it appears to have had one major impact: complicating the decision about when to announce. There are just as many people now telling Trump to wait to unveil a run as there are those urging him to jump in as a sign of political defiance.

“One big takeaway is that he is fully aware that if he gets in before midterms he’ll get blamed for losing the Senate — he made that case [to us] and understands it,” said the RSC member.