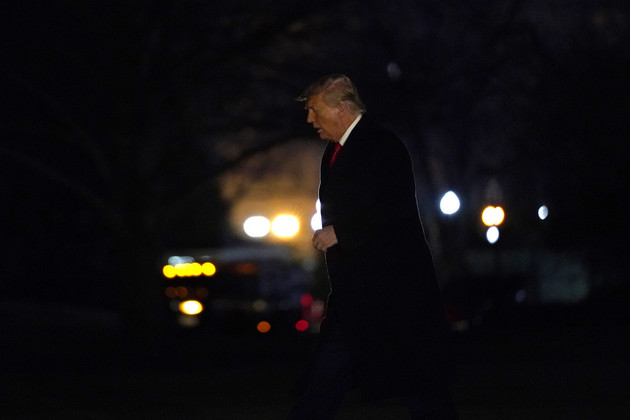 There was a belief that former President Donald Trump simply didn’t care for the law around records preservation. | Gerald Herbert/AP Photo

Standing amid half-packed boxes in early 2021, staffers in the West Wing grabbed packages of presidential M&M’s and tried to obtain giant photos of the president and the first couple that adorned the walls, eager for a memento from their White House service.

Trump-themed accessories and memorabilia were snagged. Aides stood in empty offices and tried to find a moment to secure presidential greetings for a loved one’s upcoming birthday or anniversary.

It was part free-for-all, part fire sale. Souvenirs were kept, records were indiscriminately thrown away. The Oval Office and its adjacent private dining room were only packed up the weekend before former President Donald Trump moved out, former aides said.

So-called “burn bags” were widely present, according to two former Trump White House officials, with red stripes marking ones that held sensitive classified material meant to be destroyed. Such bags, according to Mark Zaid, an attorney well-steeped in national security law, are common. But one former official said that staff would put seemingly non-classified items in there too, such as handwritten letters and notes passed to principals. Zaid said it wasn’t necessarily improper to dispose of non-classified information this way, provided it was done under the confines of the law. But those who observed the process later conceded that it was not entirely clear if documents should have been headed to the National Archives instead of the incinerator.

It was in those tumultuous moments that — investigators allege — boxes containing classified material were packed and sent to Trump’s Mar-a-Lago home.

Nineteen months later, Trump’s handling of presidential records and West Wing material has landed him in unprecedented legal peril. Last week, the FBI resorted to getting a warrant to retrieve those items, which, the bureau said, included four sets of top-secret documents and seven other sets of classified information.

But his approach to those final days was often echoed throughout the White House, as recounted in interviews with more than a dozen ex-White House officials and advisers, who spoke on condition of anonymity to candidly describe the last days.

The final, frenzied pack up of Trump’s 1600 Pennsylvania Ave. began in earnest as the president was consumed with other matters: the aftermath of the January 6 riot and the impending impeachment. Norms and protocols were cast aside. Everything was running late, including the General Services Administration’s formal acknowledgment of a transition of power.

“We were 30 days behind what a typical administration would be,” recalled one former top Trump aide.

Throughout the months of December and January, administration officials were given guidance by the White House counsel’s office on how to abide by the Presidential Records Act, the post-Watergate law that dictates the procedures and processes for preserving government documents. There was professional staff that helped manage the IT systems and National Archives and Records Administration embeds who reminded aides about record preservation.

Staff also began offboarding — leaving an increasing pile of work to a dwindling number of aides. Some of them were bitter and exhausted and displayed little desire or inclination to help an incoming administration that their boss claimed stole the election.

“Part of the MAGA movement is kind of a ‘fuck you’ to the government bureaucracy, which you can interpret as the Deep State,” said one former Trump staffer. “People were really dissatisfied with the transition and the outcome of the election. This is the last piece of control that they had [while] in power.”

The weeks after the November elections were among the more chaotic for a Trump White House that had been defined by chaos. The West Wing was left reeling by Trump’s loss to Joe Biden, and the president’s refusal to concede largely froze the transition process in place.

Some aides recalled that staff secretary Derek Lyons attempted to maintain a semblance of order in the West Wing despite the election uncertainty. But he departed the administration in late December, leaving the task of preserving the needed records for the National Archives to others. The two men atop the office hierarchy — then-White House chief of staff Mark Meadows and Trump — took little interest in it, aides and advisers recalled. Meanwhile, responsibility for overseeing the pack up of the outer Oval and dining room, an area where Trump liked to work when not in the Oval Office, was left to Trump’s assistants, Molly Michael and Nick Luna, according to multiple former aides.

A spokesperson for Trump didn’t respond to a request for comment for the story. A person close to Meadows insisted that, “All procedures were followed in accordance with guidance.”

Open government groups were already, by that point, trying to force the administration’s hand to preserve its records. Tom Blanton, director of the independent non-governmental National Security Archive at George Washington University — one of those groups pressing the White House — explicitly said that the goal was to “prevent a bonfire in the Rose Garden.” He and others were concerned by reports that White House staff and outside advisers were using personal email, WhatsApp and disappearing messages.

There was also a belief that Trump simply didn’t care for the law around records preservation.

“The counsel’s office was often working at cross-purposes with the way President Trump treated records,” Blanton said. “To Trump, the White House was another casino he had bought. This one was just on Pennsylvania Avenue.”

Trump has long loved to collect and display items that remind him and others of his personal feats. His golf courses and the office in Trump Tower are cluttered with photos, magazine covers featuring him, and souvenirs attesting to the perks of his wealth and fame. Whatever he didn’t want was usually whisked away with little regard. Indeed, as he worked in the Oval Office, Trump would end each day pushing the materials from his desk into a cardboard box that, once filled, would be sent off and replaced, according to two former officials.

Often, Trump would call for aides to bring him a souvenir — a letter from North Korea’s Kim Jong-Un was a particular favorite — and he’d delight in showing off for guests.

Under investigation for possible violations of the Espionage Act and other laws, Trump has denied wrongdoing while offering shifting explanations for the presence of the material at Mar-a-Lago. Aides said they recalled very few conversations during the transition about what to do with the documents that Trump would, on occasion, bring up to the White House residence.

As for the broader transition, a handful of Trump White House aides argued that the process of sorting and storing government records, returning equipment and discharging staffers of their security clearances, was clearly outlined by the counsel’s office and done with care.

“You sign all this stuff when you start, you’ve already been told here’s how the Presidential Records Act works, here’s what it says, here’s what it means, as far as what we expected,” said one former Trump White House official. “It seemed very routine.”

But most aides described a haphazard process as Inauguration Day approached. Lawyers would send around guidance when the staffers should pack up and how it should be done, but “they weren’t going to go through paper by paper,” one former staffer recalled.

“It was just drawer by drawer,” the person said. “It’s not a scientific process. You don’t have someone breathing down your neck looking at what you were taking.”

That stood in marked contrast to the process put in place by Trump’s predecessor. President Barack Obama’s administration, facing term limits, knew it was leaving and began the transition in August 2016, according to Neil Eggleston, former Obama White House counsel. Beyond that, they didn’t regard the rules around record retention as vague.

Trump, Eggleston surmised, was a victim of his own political impulses. “[H]e denied being defeated so they didn’t really engage in a transition process because he refused to let it happen,” he said. “So that meant that they were in a fairly frantic situation as the inauguration day came.”

For outgoing White Houses, there is typically a debriefing process about classified documents, and then a procedure to turn over government phones and computers. But for many of the last Trump holdouts, that process came after the Capitol riot, a stunning day of violence which triggered heightened security throughout Washington. The security obstacles erected around the White House, aides recalled, created more logistical hurdles for an already exhausted and hollowed-out staff.

Sloppiness ensued in many departments. Many staffers seemed more interested in securing copies of “jumbos” — the giant photos that adorned the West Wing’s walls — than sorting and packing up their files. Those who stayed focused on juggling the operational demands of running a country with the political whims of a president who, until just days before, was trying to cling to power.

There was, simply, not much care for protocol.

“Compared to previous administrations of both parties,” conceded a person familiar with the process, “there was less of a willingness to adhere to the Presidential Records Act.”

Sam Stein contributed to this report.