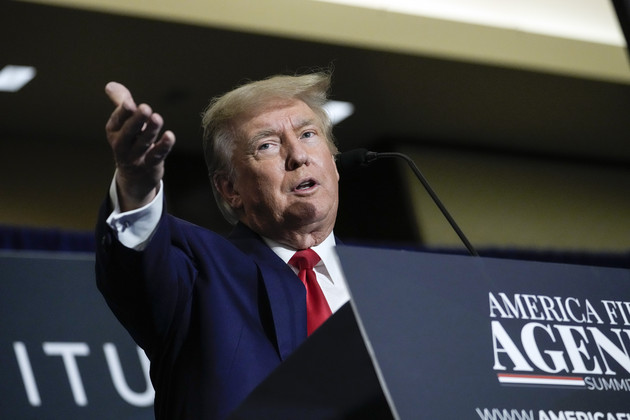 Former President Donald Trump called Republican Senate candidate Eric Schmitt Monday evening, after posting on social media that he would endorse in Missouri’s GOP primary, and told him to look out for an announcement.

What the former president didn’t say, according to two people familiar with the conversation, is that the press release would simultaneously back Schmitt and his rival for the GOP nomination, Eric Greitens. Greitens received a similar call in which Trump congratulated him on the endorsement and made no mention that he also endorsed Schmitt, Missouri’s state attorney general.

It marked the end of the chaotic seven hours in Trump world, as the former president’s future daughter-in-law, his handpicked Republican National Committee chairwoman, Missouri’s junior senator and a host of other party operatives and Trump allies jostled over who the former president should endorse in the tumultuous Missouri Senate primary, where polling places were set to open less than 24 hours later.

Trump kicked off the private lobbying spree late Monday morning, when he posted on social media that he would be making his endorsement official that day — without mentioning that he apparently had not yet made his final choice. What transpired over the course of the afternoon illustrates the anarchical nature of Trump’s endorsement process. While the much-coveted endorsement is one of Trump’s greatest assets and his chief political weapon, how he decides who gets one is often more improvisational than scripted.

In this case, many Republican officials feared that the wrong decision could come with serious repercussions for the party. The former governor stepped down from his post in 2018 after his hairdresser accused him of sexually assaulting her. And his ex-wife has accused him in court of assaulting her and their young son in 2018. Greitens has strenuously denied the allegations, but his standing in the Missouri GOP Senate primary has slipped amid a wave of ads focused on those allegations.

At the center of Monday’s episode, according to several people familiar with what transpired, was Kimberly Guilfoyle, the fiancée of Donald Trump Jr. who spent the weekend making the case for Greitens while attending a golf tournament Trump hosted at his Bedminster, N.J. club.

A little after noon, Trump was having a previously scheduled meeting with RNC Chairwoman Ronna McDaniel, where the Missouri race became a topic of discussion. During the sit-down, Trump called Missouri Sen. Josh Hawley, a Greitens foe who referenced a recent poll showing the former governor trailing in the primary.

After being told that Guilfoyle was on the Bedminster property, Trump asked for her to be called in to the meeting.

By the time Guilfoyle made it into the room, Hawley was no longer on the line. McDaniel, who like other senior Republicans tried to dissuade Trump from endorsing Greitens for fear that he could lose the seat to a Democrat in the general election and that his nomination would force Republicans to spent money in a state that should be safe for the party, remained in the meeting. She also argued that a late endorsement would do little to alter the race, with most polls showing Greitens lagging behind in third place, and that it would make more sense for Trump to remain neutral.

Guilfoyle was steadfast in her defense of the former governor, saying that the party establishment had been trying to get Trump to oppose Greitens. McDaniel, meanwhile, reiterated her argument that Greitens would make for a weak nominee given his personal baggage.

As the meeting wore on, those familiar with what transpired say, Trump began to lose patience. At one point it was suggested that he could endorse “Eric,” and that by doing so he would be supporting both Schmitt and Greitens.

It was a madcap exit ramp. But Trump went in on the details, asking if the two candidates’ first names were spelled identically — noting that it wouldn’t work if they weren’t. While Trump was intrigued, he also remarked that it might be too cute. He asked for draft endorsements to review, one announcing his support for Schmitt, the other for Greitens.

At this point, it was still unclear who Trump would endorse by his self-imposed end-of-day deadline, underscoring the rolling, unpredictable nature of how the former president exercises his power. As he has in other races, Trump on Monday reached out to an array of figures for their views. The list included Republican pollsters John McLaughlin and Robert Cahaly, both of whom have conducted surveys on the race. He was given notes from Tony Fabrizio, a longtime Trump pollster who worked for Greitens.

Trump later asked allies Pam Bondi and Matthew Whitaker, both of whom are backing Schmitt, for their views. At another point, he surveyed Chris Cox, the founder of the “Bikers for Trump” coalition, who was also on the Bedminster property. Cox excused himself from the office so he could get a reading of those in his organization. Upon reentering the office, he informed Trump that his crowd was aligned with Greitens.

But Trump circled back to the idea of endorsing the two Erics, reasoning that there were pluses and minuses to both, and that by doing so it would provide to each the opportunity to win with his support. He drafted a statement that would soon go out.

“I trust the Great People of Missouri, on this one, to make up their own minds,” it read, “much as they did when they gave me landslide victories in the 2016 and 2020 Elections, and I am therefore proud to announce that ERIC has my Complete and Total Endorsement!”

People familiar with Trump’s thinking say concerns surrounding Greitens’ past controversies weighed on his decision not to offer a full endorsement of Greitens. At one point on Monday, they said, Trump pointed out that Greitens might face Trudy Busch Valentine, a wealthy Democratic candidate, in the general election. Busch is heir to the Anheuser-Busch brewing fortune.