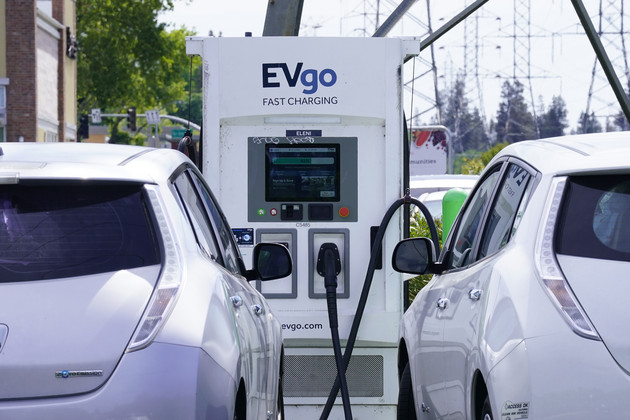 The Democrats’ newest climate deal includes $40 billion in tax credits to accelerate U.S. manufacturing of EVs and the batteries needed to power them. | Rich Pedroncelli/AP Photo

Democrats’ climate deal is leaving at least one group feeling deflated — transit advocates who wanted the Biden administration to dethrone the car as the main way Americans get around.

The $700 billion-plus deal, struck late Wednesday, devotes the vast majority of its approximately $50 billion in transportation-related spending to make cars greener, including tens of billions of dollars to produce more electric vehicles and encourage consumers to buy them.

But the proposal, H.R. 5376 (117), offers at most a few billion in funding for alternatives that could yield a future without cars, such as mass transit, biking, walking and trains. All these other options could help eat into the transportation sector’s greenhouse gas emissions, the United States’ single largest contributor to warming the planet.

“It’s so blatant that you get tax credits for buying an electric vehicle but there’s zero dollars for buying an electric bike, zero dollars for riding public transit,” said Yonah Freemark, a researcher at the Urban Institute who focuses on transportation and housing policy. “It is subsidizing car ownership more than any other mode of transportation by far.”

The car-centric focus dismays even advocates who are otherwise pleased that Democratic leaders and Sen. Joe Manchin (D-W.Va.) managed to agree to a package that would amount to the United States’ biggest-ever climate law. Some are wary that Manchin, who said he and his staff “wrote the bill,” is cementing a future where the car remains king.

“It is a bitter pill in terms of rail and transit, which is the one clearly established, low-carbon emission transportation systems we have going,” said Sean Jeans-Gail, vice president of government affairs and policy at the Rail Passengers Association. “It does feel like this is going to lock in highway dominance.”

Other greens are ecstatic, though. Matt Casale, environment campaigns director of U.S. PIRG, said the bill’s clean energy tax credits, including for the transportation sector, will help cut carbon pollution.

“They will help make it affordable for Americans of all stripes to switch to electric vehicles, put solar panels on their roofs and purchase cleaner, healthier electric appliances that don’t pump pollution in our homes and communities,” he said in a statement.

The bill includes two items that, in theory, could help the millions of Americans who don’t rely on cars to get around: $1 billion in grants for clean heavy-duty vehicles like buses and $3 billion in grants to invest in projects that address neighborhood equity, safety and affordable transportation. That broad mandate could include some projects not dedicated to drivers, such as new bike trails or sidewalk improvements.

The bill is chock full of other funding for car-related priorities. The package includes $40 billion in tax credits to accelerate U.S. manufacturing of EVs and the batteries needed to power them. The money is intended to spur auto manufacturers to make more EVs, for the U.S. government to add more of them to their fleet, and for consumers to purchase more of them (offering credits of up to $7,500 for a new electric vehicle, or up to $4,000 for a used one).

The Zero Emission Transportation Association, a group pushing for 100 percent of new vehicle sales to be electric by 2030, hailed the bill as “an unprecedented investment in our clean energy infrastructure and transportation system.”

Even a car-focused climate bill is much more palatable to climate advocates, compared to the narrowly focused health care bill that was under consideration before Wednesday or nothing at all.

In addition to the incentives for private-use EVs, the Postal Service would also receive $3 billion to purchase EVs to electrify its 230,000-vehicle fleet and another $1 billion in grants would fund heavy-duty electric vehicles such as school and transit buses along with garbage trucks, the only provision that explicitly mentions transit.

Arguably, the bill meets Americans where they for the most part live, after more than a century of cars and trucks taking a central role in people’s daily lives.

Still, “It’s a missed opportunity to not consider other modes of transit and ways to incentivize shifting away from driving for short trips,” said Noa Banayan, the director of federal affairs at PeopleForBikes, a group that advocates for more bike usage and infrastructure. “I understand why electric vehicles were prioritized, but think about the broader [climate] benefits and how much more quickly you can get them when replacing an internal combustion engine with a bicycle.”

Transit and bike advocates got a bigger win from last year’s infrastructure law, which included $89.9 billion in transit funding over five years along with the largest investment in Amtrak since the rail service’s creation in 1971. That legislation also included $5 billion to make streets safer over the next five years, which would help safeguard bike riders and pedestrians.

And even though Freemark wanted to see more investments in transportation that doesn’t include cars, he acknowledged that the new funding combined with the infrastructure law’s $7.5 billion to build a national network of electric vehicle chargers would go a long way toward fast-tracking an uptick in electric vehicle usage among Americans who can’t or won’t ditch their cars. Freemark said the number of electric vehicle models on sale in the U.S. is one-third what’s now on the European market, and that a market-driven uptick in sales isn’t happening fast enough.

“We’re getting an ecosystem going, and that is a positive thing,” Freemark said.

Banayan, Jeans-Gail and Freemark were also unhappy that the bill would give enhanced subsidies to electric trucks and SUVs, which are generally powered by larger batteries that take more resources to build than those that power cars. The maximum price for EVs that qualify for the tax credit would be $80,000 for SUVs, pickups and vans, versus $55,000 for smaller vehicles.

In general, heavier vehicles are more dangerous because they can inflict more damage in a crash. And because of the large batteries that will be needed to power EVs, they are generally heavier than their combustion engine counterparts.

Some large electric vehicles, such as the Ford 1-50 Lightning and the Rivian R1T pickup truck, come with heightened risks for pedestrians and larger battery sizes that mitigate their environmental benefits. Both are priced low enough for buyers to get tax credits under the bill.

Jeans-Gail also noted that the uptick in EVs would further accelerate the collapse of the federal highway trust fund that is bankrolled by gasoline taxes.

Still, Jeans-Gail said the bill is a good step forward, even if rail loses out.

“As a citizen of the planet, I’m happy they’re doing something,” Jeans-Gail said.