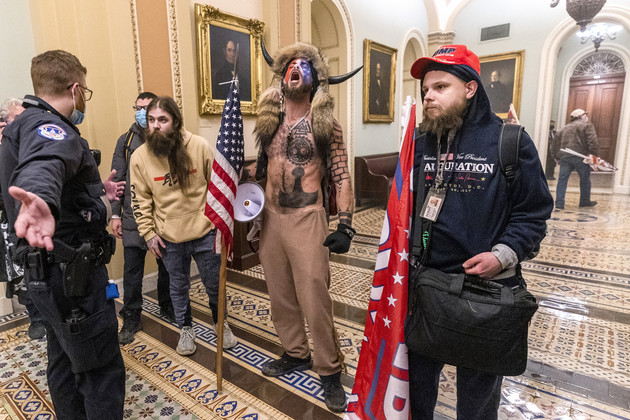 A Jan. 6 rioter who wielded a hatchet and smashed two windows with a flagpole will serve no jail time, a federal judge ruled Wednesday, finding that Asperger’s syndrome made him susceptible to the influence of the mob.

Nicholas Rodean of Frederick, Md., attempted to address U.S. District Court Judge Trevor McFadden Wednesday and visibly struggled to complete thoughts and sentences while explaining and apologizing for his Jan. 6 conduct. At one point, he clutched his head in frustration.

McFadden ultimately chose to sentence Rodean to 240 days of home confinement. But he said he was convinced that Rodean’s severe mental illness significantly mitigated “the blameworthiness of your conduct.”

It was an unexpected turn for a defendant whose health struggles were largely discussed under seal during his nearly two-year criminal case. Rodean was charged on Jan. 11, 2021 for his role in the Capitol breach. McFadden found him guilty during a bench trial in July of shattering two Capitol windows with a flagpole, as well as other crimes associated with breaking into the building and disrupting congressional proceedings.

Rodean famously stood alongside Jan. 6 defendant Jacob Chansley — who wore a horned helmet and face paint — in a standoff with Capitol police that occurred amid a frantic effort to evacuate then-Vice President Mike Pence and senators from the Capitol.

Rodean’s attorney, Charles Burnham — who also represents Donald Trump associates Jeffrey Clark and John Eastman in ongoing Jan. 6 matters — said Rodean had become fixated on politics during the pandemic, when he was isolated and without his typical support structure. He said Rodean was particularly susceptible to the influence of “assertive male figures” like Trump. And once inside the Capitol, he added, Rodean was similarly drawn in by Chansley, who commanded the attention of the crowd that day.

Rodean’s parents sat in the courtroom during the sentencing proceedings, and his sister Kimberly addressed McFadden, during which she expressed worry that prison would devastate her brother’s mental health and sideline his newly successful dog-walking business.

“Autistic people do not fare well in prison,” she said.

But it was Rodean’s own statement to the judge that appeared to be most affecting. For nearly 15 minutes, Rodean struggled to articulate his conduct on Jan. 6, describing how he consumed an intense amount of media about the 2020 Black Lives Matter protests that, at times, led to rioting. On Jan. 6, he took an Uber to the Stop the Steal rally at which Trump appeared, and then marched along with the crowd. Someone then handed him an object that he used to smash the two windows that had already been struck by other rioters.

“Are you ever going to do anything like this again?” McFadden asked him.

A day earlier, McFadden sentenced Jan. 6 defendant Hunter Seefried to 24 months in prison for similarly joining the early breach of the building and engaging in the same standoff with police outside the Senate chamber.

Prosecutors had initially recommended a 57-month sentence for Rodean.

“There is no indication that he holds any regrets regarding his participation in the riot that day,” the Justice Department wrote in a sentencing recommendation filed last week.

But in his own sentencing memo, Burnham urged McFadden to consider Rodean’s mental health and a doctor’s evaluation that found prison would be uniquely dangerous for his client.

Burnham said Rodean is susceptible to being taken advantage of, easily triggered by loud noises and other stimuli and would likely be put in protective custody by corrections officials who may not have the training for someone with Asperger’s syndrome — forcing him into prolonged periods of isolation.

“We submit that Nicholas’ ‘history and personal characteristics’ make this a unique case among the hundreds of prosecutions to come out of that day,’ Burnham wrote.