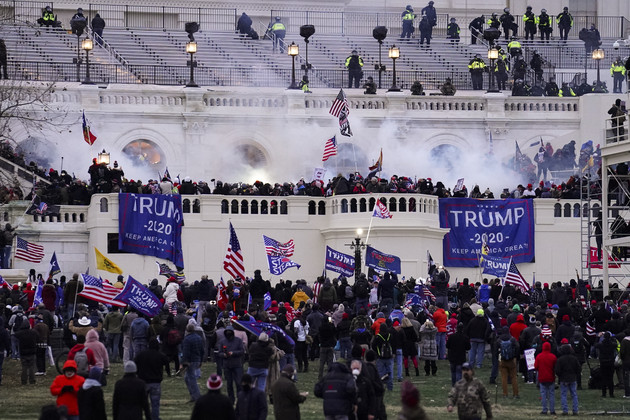 A judge said former President Donald Trump's words on Jan. 6, 2021, “could signal to protesters that entering the Capitol and stopping the certification would be unlawful.” | John Minchillo/AP Photo

The Jan. 6 select committee’s finding that Donald Trump lured followers to storm the Capitol does not absolve them of legal responsibility for their actions, a federal judge ruled Wednesday, the first opinion to cite the congressional panel’s criminal referrals of the former president.

U.S. District Court Judge John Bates cited the select committee’s report and criminal referrals to swat down a Jan. 6 defendant’s claim that he believed Trump had authorized him and other rioters to enter the Capitol when he urged the crowd to march down Pennsylvania Avenue.

Bates, an appointee of President George W. Bush, ruled that defendant Alexander Sheppard should be prohibited from making the “public authority” defense because there’s simply no evidence Trump told his followers that entering the restricted grounds of the Capitol on Jan. 6, 2021, was legal. In fact, his incendiary rhetoric — especially telling his supporters to “fight like hell” — may suggest Trump was asking them to break the law, Bates said.

His words “could signal to protesters that entering the Capitol and stopping the certification would be unlawful,” Bates found.

Bates’ ruling is the first to reckon with the select committee’s finding that Trump violated at least four federal laws in his crusade to subvert the 2020 election. And it is an early window into how the judiciary might interpret the unusual findings of criminal violations by a congressional committee.

A slew of Jan. 6 defendants have sought to argue that Trump somehow blessed their decision to breach the Capitol, saying they were misled into believing their actions were legal. Though Trump has no power to permit others to violate federal laws, many in the crowd might have viewed his instructions as legal permission, they’ve argued. Those defenses have largely failed in courts, and the one jury to hear that claim — in the case of Dustin Thompson — rejected it, finding Thompson guilty on all charges.

Bates noted that the select committee’s findings might, on the surface, lend credence to the notion that Trump had somehow sought to give supporters permission to go into the Capitol. The panel, he said, cited Trump’s Jan. 6 speech as a triggering moment for the attack on the Capitol, quoting the report’s finding that Trump “summon[ed] a mob to Washington, and knowing they were angry and armed, instruct[ed] them to march to the Capitol.”

But the committee’s finding, Bates ruled, does not suggest that Trump told his followers that entering the Capitol would be legal. In fact, Trump’s incendiary rhetoric might have done just the opposite.

“Thus, the conclusions reached here — that even if protesters believed they were following orders, they were not misled about the legality of their actions … is consistent with the Select Committee’s findings,” Bates wrote.

No, Advisors, Crypto Is Not a Ponzi Scheme