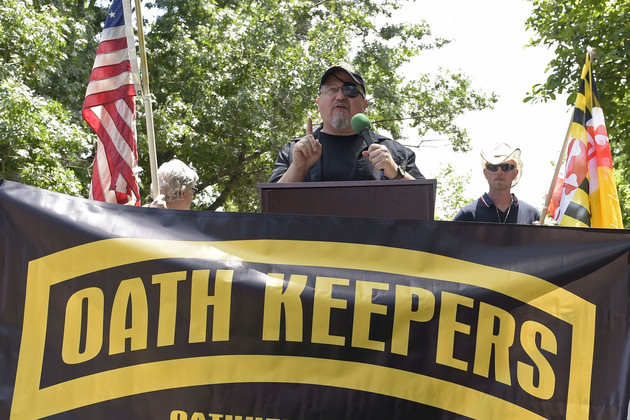 Stewart Rhodes, founder of the Oath Keepers, center, speaks during a rally outside the White House in Washington, June 25, 2017. | Susan Walsh/AP Photo

A federal judge has turned down a bid by the founder of the Oath Keepers’ militia group to delay his trial set for later this month on seditious conspiracy and other charges related to the storming of the Capitol on Jan. 6, 2021.

During a 90-minute, hastily assembled hearing Wednesday afternoon, U.S. District Court Judge Amit Mehta said granting the request submitted Tuesday by a new lawyer for militia leader Stewart Rhodes would lead to “havoc” at the trial set to open Sept. 27 in Washington for Rhodes and four other defendants.

“Havoc is the only appropriate word I can think of,” said Mehta, an appointee of former President Barack Obama. “It’s not going to happen.”

The motion from new Rhodes attorney Edward Tarpley claimed a breakdown in communications between Rhodes and the lawyers who have represented him in the case since shortly after his arrest in Texas in January, Phillip Linder and James Lee Bright. Rhodes accused Linder and Bright of failing to file motions and appeals and of not having contact with him for lengthy stretches of time.

Rhodes said his last attorney-client call with his original lawyers was on Aug. 10, something Linder did not dispute.

“It has been difficult,” said Linder, who claimed to have tried to arrange a call with Rhodes five times over the past two weeks without success. “It’s not ideal.”

However, Mehta ruled that moving Rhodes to another Jan. 6 trial of alleged Oath Keepers members set for February would be highly disruptive and that the earliest the court could schedule a trial for Rhodes alone would be sometime next summer.

“Jan. 6 has created a massive traffic jam of cases,” the judge said.

Mehta also noted that Rhodes elected to retain Linder and Bright knowing that they were based in Texas and that having them handle a trial in Washington could present logistical issues.

Linder and Bright each forcefully defended their work in the case, while acknowledging some obstacles.

Bright also suggested that Rhodes, who is a disbarred attorney, was trying to get the defense to file an unwarranted motion claiming misconduct by prosecutors.

Bright initially said the motion to delay the trial and replace him and Linder contained lies, but Bright later withdrew that characterization and said the language could have arisen from “a pretty dramatic misunderstanding.”

Mehta said he would not allow Bright or Linder off the case, but would permit Tarpley to join them. However, Bright said he didn’t want to work alongside Tarpley. The judge eventually said he’d allow the Louisiana-based Tarpley to join only if the other lawyers and Rhodes agreed.

“We can make room. We’ve got enough tables,” Mehta said.

While the judge dismissed nearly all the arguments raised in Tarpley’s motion for a delay and to replace defense counsel, Mehta said he was concerned about prosecutorial decisions to bring charges in recent months against two people connected to the Oath Keepers, Michael Greene and Kellye SoRelle.

“That was the one that struck a chord,” Mehta said.

Linder complained that both individuals had been on the defense’s roster of planned witnesses for the upcoming trial.

“That’s been kind of tail-spinning for us,” Linder said. “Every time we put someone on the witness list, they get indicted.”

Mehta said he’s entertain a defense motion seeking some relief on that issue if it is made.

But prosecutor Jeffrey Nestler said Rhodes’s lawyers had been on notice for months that Greene and SoRelle could face criminal charges.