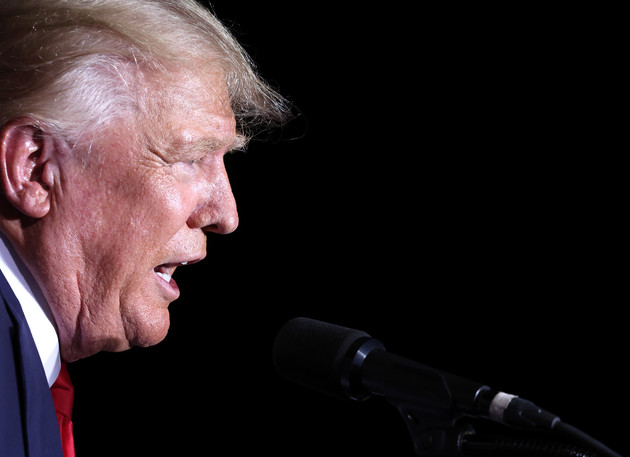 A federal judge on Thursday excoriated and sanctioned several members of Donald Trump’s legal team, saying the former president’s massive lawsuit against his former rival, Hillary Clinton, and dozens of other adversaries amounted to an intentional abuse of the legal system.

“These were political grievances masquerading as legal claims,” said U.S. District Court Judge Donald Middlebrooks, a Florida-based jurist who dismissed Trump’s lawsuit in September. “This cannot be attributed to incompetent lawyering. It was a deliberate use of the judicial system to pursue a political agenda.”

Middlebrooks ordered the attorneys to pay $50,000 to the court and more than $16,000 in legal fees to Charles Dolan, one of the defendants, who initiated the sanctions proceedings against Trump’s attorneys. The attorneys ordered to pay the sanctions costs include one of the most prominent members of Trump’s current coterie of lawyers, Alina Habba, as well as his lead local counsel in the Clinton suit, Peter Ticktin, and two others: Michael Madaio and Jamie Sasson.

The Trump lawyers said an appeal is planned. “It should be no surprise that we will be appealing this decision,” Habba said Thursday evening.

“We attempted to right a wrong, and our reward is a kick in the teeth,” Ticktin said Friday. He said the sanctions and fees will be paid as an appeal goes forward.”

Middlebrooks is an appointee of former President Bill Clinton, something that Trump’s lawyers pointed out in asking the judge to recuse himself from the suit against Clinton’s wife. The judge declined that invitation, saying he had no connection to Hillary Clinton. Middlebrooks also accused Trump’s lawyers of filing the suit in a remote clerk’s office in an unsuccessful bid to have it assigned to a Trump appointee, Judge Aileen Cannon.

Cannon was later assigned to another dispute of intense interest to Trump: his suit seeking to get a special master appointed to oversee the handling of records seized from his Mar-a-Lago estate during an FBI raid in August aimed at recovering records that appeared to be classified.

In Thursday’s 19-page sanctions order, Middlebrooks contended that Trump’s attorneys knowingly misrepresented facts in the far-ranging lawsuit, which accused a diverse range of defendants of intentionally sabotaging Trump’s presidential bid by raising false claims of Russian influence over his 2016 presidential campaign. He also accused them of using the lawsuit as a ploy to raise political contributions, calling it “performative litigation for purposes of fundraising and political statements.”

The judge said Trump’s lawyers pressed on with claims that were farcical or false, even after being put on notice that they were erroneous. In particular, he zeroed in on the suit’s assertion that Dolan, a Virginia public relations executive, was part of a conspiracy to tie Trump to Russian influence operations.

“The pleadings in this case contained factual allegations that were either knowingly false or made in reckless disregard for the truth,” wrote Middlebrooks.

“Mr. Trump’s lawyers were warned about the lack of foundation for their factual contentions [and] turned a blind eye towards information in their possession,” the judge added. “The lawyers failed to conduct a pre-filing inquiry into the allegations against Mr. Dolan and have continued to advance Plaintiff’s false claims based upon nothing but conjecture, speculation, and guesswork.”

Middlebrooks threw out the initial version of Trump’s suit and declared a revised version to be “in its entirety, frivolous.” He said the case was inherently implausible.

“Not just initiated by a shotgun pleading, this was a shotgun lawsuit,” the judge opined. “Thirty-one individuals and organizations were summoned to court, forced to hire lawyers to defend against frivolous claims. The only common thread against them was Mr. Trump’s animus.”

Middlebrooks also suggested the suit was part of a pattern of abuse of the court system for political purposes. He seemed to urge disciplinary action against the lawyers involved, arguing that a federal court rule that allows punishment for frivolous filings probably would not be sufficient to stem such activity.

“So who is responsible for this case and others like it? The rule of law is undermined by the toxic combination of political fundraising with legal fees paid by political action committees, reckless and factually untrue statements by lawyers at rallies and in the media, and efforts to advance a political narrative through lawsuits without factual basis or any cognizable legal theory,” the judge wrote. “Lawyers are enabling this behavior and I am pessimistic that Rule 11 alone can effectively stem this abuse. Aspects may be beyond the purview of the judiciary, requiring attention of the Bar and disciplinary authorities.”

Trump is appealing the judge’s decision to toss the suit out. His opening brief at the Atlanta-based 11th Circuit Court of Appeals is due later this month.

Why Nevada wants to use drones inside prisons