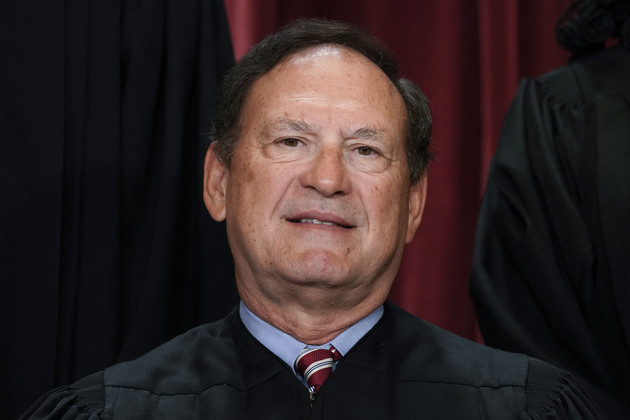 Justice Samuel Alito denied allegations Saturday from a former anti-abortion activist that his wife, Martha-Ann Alito, played a role in revealing the outcome of a pending Supreme Court case in 2014. An Ohio woman friendly with the Alitos who was a donor to a Supreme Court-connected nonprofit group and allegedly served as a conduit for the sensitive information has also denied the claim.

The allegation comes six months after a stunning breach of Supreme Court secrecy — POLITICO’s publication of the draft ruling authored by Alito that overturned the landmark, 49-year-old precedent guaranteeing a federal constitutional right to abortion.

The decision, which emerged in nearly identical form from the draft in late June, prompted intense scrutiny of the court, heated protests and a backlash that appears to have dulled expected advances by Republicans in the midterm congressional elections earlier this month.

On Saturday, the New York Times published claims from Rev. Rob Schenck around another controversial case — the high court’s 2014 decision about the rights of religious company owners to deny coverage for some contraceptives under Obamacare — Hobby Lobby v. Sebelius. Schenck, once an evangelical minister and prominent anti-abortion activist, has since become disillusioned with the religious right, changed denominations and now says he regrets many of his prior activities.

POLITICO spent several months attempting to corroborate Schenck’s claim published Saturday in The Times of a leak about the Hobby Lobby decision but was unable to locate anyone who heard about the decision directly from either Alito or his wife before its release at the end of June 2014.

In July, POLITICO published an account of Schenck’s efforts to encourage more strictly conservative decisions by the Supreme Court. Part of the multi-faceted plan — dubbed “Operation Higher Court” — involved trying to gain access to the justices through various means, including by having religious couples from across the U.S. gain entrée with the justices and seeking opportunities to socialize with them at fundraising events and even in their homes.

Schenck claims he was told about the outcome of the Hobby Lobby case by Gayle Wright, the wife of a wealthy real estate developer and founder of a successful furniture business, Don Wright. As POLITICO previously reported, the Wrights were part of “Operation Higher Court.”

In a letter Schenck sent to Chief Justice John Roberts in July and shared with the Times, Schenck claimed that he became privy to the “status” of the Hobby Lobby case after donors to Schenck’s group, “Faith and Action,” were dinner guests at the Alitos’ home in Alexandria, Va. on one evening in 2014. Schenck told the newspaper Gayle Wright was the donor who relayed the information.

In a statement, Alito acknowledged socializing with the Wrights, but adamantly denied that he or his wife, Martha-Ann, were the source of any leak.

“The allegation that the Wrights were told the outcome of the decision in the Hobby Lobby case, or the authorship of the opinion of the Court, by me or my wife is completely false,” Alito said.

“My wife and I became acquainted with the Wrights some years ago because of their strong support for the Supreme Court Historical Society, and since then, we have had a casual and purely social relationship. I never detected any effort on the part of the Wrights to obtain confidential information or to influence anything that I did in either an official or private capacity, and I would have strongly objected if they had done so. I have no knowledge of any project that they allegedly undertook for ‘Faith and Action,’ ‘Faith and Liberty,’ or any similar group, and I would be shocked and offended if those allegations are true.”

Wright also denied the claim Saturday. “This whole thing is unbelievably misconstrued,” she told CNN, adding that the account of her receiving a leak from the Alitos was “patently not true.” “Cases are never discussed, everybody knows that,” Wright added. Wright did not respond to a request for comment.

Schenck has been publicly claiming inside knowledge of an Alito-authored Supreme Court decision for the past several months, writing on Facebook after POLITICO’s publication of the draft decision in the Dobbs case on abortion that he had been privy to an early disclosure.

He wrote that he remembered “that another highly controversial Alito opinion had leaked before—and that it came directly from the Justice himself. (Never mind how I know that—but I do know it firsthand,)” Schenck posted about a day and a half after POLITICO’s scoop. “So, it occurred to me a leak is not as rare as people think.”

There are, however, numerous pieces of circumstantial evidence that indicate Schenck had some advance indication about the outcome of the Hobby Lobby case.

Alito’s ruling was the second decision released that day, after another opinion he wrote in a closely watched labor case from Illinois. Recordings of the morning’s opinion releases indicate that Alito began delivering the Hobby Lobby opinion around 10:16 a.m., but did not finish until after 10:32 a.m.

“Justice Alito appears to be finishing up his summary. No word yet on possible dissent from the bench,” SCOTUSblog writer Amy Howe posted on the site’s live blog at 10:29 a.m. that day.

Yet Schenck’s group issued a media advisory praising Alito’s decision and summoning members of the press to a prayer service scheduled for 10:30 a.m. that morning.

The announcement from Faith and Action also contains unusually defensive language stressing that Schenck got the opinion through official channels.

“’It is a good day in America,’ said Rev. Schenck, after listening to the majority opinion written by Justice Samuel Alito and examining a printed copy from the Court clerk’s office,” according to the news release from the group.

The media advisory stated that Schenck had reviewed an official copy of the opinion but he can be heard on a C-Span recording after its release looking for one to review.

“You just speak,” Schenck’s twin brother Paul, a Catholic priest, interjects from over his shoulder.

“In a moment, I expect to have the slip decision in my hand,” Rob Schenck then says, before reporting that the two men just came from the courtroom and heard Alito hand down the ruling of the court in favor of Hobby Lobby.

Several Democratic lawmakers reacted to Scheneck’s claims regarding an early disclosure of the decision with alarm.

“The existence and scope of this judicial lobbying campaign is alarming and further confirms the need for the judiciary to enact stronger ethics requirements as soon as possible,” Whitehouse and Johnson wrote to Roberts on Sept. 7. “Litigants and the American public deserve to know when and how private groups are working to sway litigation by providing Supreme Court justices with lavish dinners or hunting trips. These concerns are especially acute if the counsel for these lobbyists is also arguing before these justices in court— as may be the case here.”

Roberts responded through an aide, offering a two-page statement about Supreme Court ethics practices and without addressing most of the specific questions the lawmakers asked.

The Air Force wants to send its Reaper drones to Ukraine. The Pentagon’s not so sure.