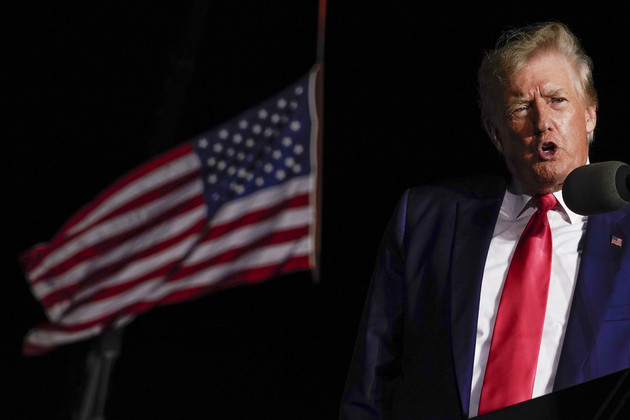 The Justice Department has released a long-sought legal memo arguing that then-President Donald Trump’s actions during special counsel Robert Mueller’s Trump-Russia investigation did not warrant prosecution for obstruction of justice, even if a president was susceptible to criminal charges while in office.

In the nine-page memo disclosed Wednesday, two of the most senior officials in the Justice Department advised then-Attorney General William Barr that Trump’s threats to fire Mueller and his various public and private outbursts against witnesses he viewed as hostile or unhelpful to him didn’t amount to the sort of case prosecutors would bring under their established standards.

“Having reviewed the Report in light of the governing legal principles, and the Principles of Federal Prosecution, we conclude that none of those instances would warrant a prosecution for obstruction of justice, without regard to the constitutional constraint on bringing such an action against a sitting president,” the assistant attorney general for the Office of Legal Counsel, Steven Engel, and Principal Associate Deputy Attorney General Edward O’Callaghan wrote in the March 24, 2019, memo.

The Justice Department fought release of the memo for years, arguing that it was part of a deliberative process advising Barr on what to do in response to Mueller’s report. However, judges concluded that at the time the memo was written, Barr had already decided not to charge Trump, so the issues hashed out in the memo were theoretical and not linked to any pending decision.

Citizens for Responsibility and Ethics in Washington, a liberal watchdog group, filed suit under the Freedom of Information Act three years ago in an effort to make the memo public.

The Justice Department lost the first round in the access case in front of a District Court judge, who ruled that the agency’s claims that the memo was part of some kind of charging decision was “disingenuous” because that decision had already been made.

On appeal, department lawyers changed course and argued that the memo helped shape the public statements Barr would give to explain why he concluded the evidence was insufficient to support a criminal charge — even if Trump were not president.

However, a D.C. Circuit Court of Appeals panel ruled last week that argument about the memo being part of deliberations around a communications effort was surfaced too belatedly to be considered.

The Justice Department had the option to ask the full bench of the D.C. Circuit to rehear the case or to seek review at the Supreme Court, but officials indicated Wednesday that they’d decided to pass up those options.

In the memo that triggered the disclosure fight, Engel and O’Callaghan concluded that Trump’s conduct primarily reflected a frustration with the Mueller probe and what he perceived to be the politics behind it, as well as news reports they said Trump genuinely believed were flawed. They also suggested that Trump’s exhortations to some of his top allies against “flipping” were meant to prevent them from delivering false testimony — not to conceal the truth.

The officials repeatedly underscored that Mueller had not found sufficient evidence to charge any underlying crime, which they said weighed against the possibility that Trump had violated the obstruction statutes.

“In the absence of an underlying offense, the most compelling inference in evaluating the President’s conduct is that he reasonably believed that the Special Counsel’s investigation was interfering with his governing agenda,” Engel and O’Callaghan wrote.

Engel would later become a key point of resistance to Trump’s effort to use the Justice Department to help subvert the 2020 election. Engel was one of three Trump-era Justice Department witnesses to testify at a public hearing of the Jan. 6 select committee and discussed his threat to resign, along with other top department officials, if Trump had gone through with a plan to replace the department’s leadership with figures who would support his attempts to stay in power.

An Office of Legal Counsel opinion issued in 1973 — and reaffirmed in 2000 — concluded that federal criminal charges were impermissible while a president is in office.

However, some legal advocates have urged Attorney General Merrick Garland to revisit Barr’s decision not to charge Trump. They note that the Justice Department has generally taken the view that former presidents could be subject to prosecution for acts committed while in office, although it has never happened.