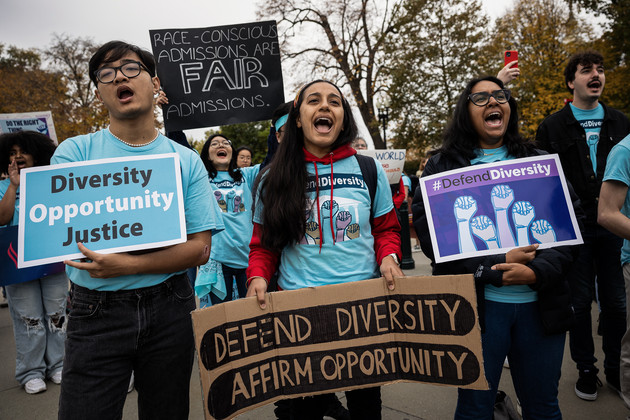 Affirmative action advocates rally outside the U.S. Supreme Court as justices heard oral arguments on two cases on whether colleges and universities can continue to consider race as a factor in admissions decisions on Oct. 31, 2022. | Francis Chung/E&E News/POLITICO

A majority of the justices sounded inclined to further restrict the use of race in college admissions during arguments in two high profile cases at the Supreme Court Monday.

SFFA urged justices to overturn its ruling in Grutter v. Bollinger, a 2003 landmark decision that held colleges can consider race and use holistic reviews as long as their affirmative action programs are narrowly tailored. Justice Sandra Day O’Connor, who wrote the 2003 opinion, had said the court expected the use of racial preferences would no longer be necessary in 25 years.

“When does it end; When is your sunset?” Justice Amy Coney Barrett asked North Carolina Solicitor General Ryan Park who is defending UNC. “Grutter doesn’t say, ‘This is great, we embrace this.’ Grutter says this is dangerous, and it has to have an endpoint.”

Arguments in the case against Harvard focused on whether race-neutral alternatives are sufficient and allegations that the Ivy League institution intentionally discriminates against Asian American students with the “personal rating” used in its holistic admissions process. Conservative justices also questioned the admissions benefits for legacy applicants and wealthy prospective students.

The court’s 6-3 conservative majority made clear its alignment with SFFA, while the court’s liberal justices defended the decades of precedent that have allowed colleges to use race as a single factor in admissions.

While SFFA contends in both cases that the use of race in admissions violates the equal protection clause, education and civil rights groups fear ending the practice will exacerbate inequality for years to come.

“A blanket ban on race-conscious admissions would cause racial diversity to plummet at many of our nation’s leading educational institutions,” U.S. Solicitor General Elizabeth Prelogar told the court. “Race-neutral alternatives right now can’t make up the difference … and because college is the training ground for America’s future leaders, the negative consequences would have reverberations throughout just about every important institution in America.”

Arguments in SFFA’s case against UNC started with questioning from Justice Clarence Thomas, who brought up a UNC argument that institutions wouldn’t be able to consider “the whole person in the admissions process” without considering race.

Justice Sonia Sotomayor, a known supporter of affirmative action, soon after launched on defending the use of race in admissions with pointed questions for SFFA’s lawyer. She emphasized how race correlates with students’ experiences.

“Why do you want the admissions officer to say, ‘I’m not going to look at the race of the child to see if they had all of those socioeconomic barriers present?’”

“When you give your race you’re not getting any special points … No one’s automatically getting in because race is being used,” Jackson said.

“You haven’t demonstrated or shown one situation in which all they looked at was race,” she added.

Conservative justices, though, heavily leaned on O’Connor’s 2003 assertion in Grutter that the court believed it would not be necessary to consider race in admissions.

With O’Connor’s end goal only six years away, Chief Justice John Roberts, Barrett and Justices Samuel Alito and Brett Kavanaugh pressed lawyers arguing on behalf of upholding Grutter for a deadline. They also wanted to know how institutions will know when they no longer have to use race in admissions to achieve diversity on campus.

“How do you know when you’re done?” Barrett asked Park.

To which Prelogar replied: “I can’t give you a precise number, Mr. Chief Justice, but I can say that I think that our society has made some progress toward that goal.”

Jackson recused herself from the Harvard case, leaving space for Justice Elena Kagan to play a greater role in the Harvard arguments for the liberal flank of the bench. She pressed Cameron Norris, who was representing SFFA, on whether race-neutral alternatives were limited in their ability to achieve diversity.

“Look, everybody would rather achieve all our racial diversity goals through race-neutral means,” Kagan said. “And that’s certainly what our cases say you have to do. The question is when the race-neutral means don’t get you there, are you prevented from taking race into account?”

“But we are not to that 25-year point yet, right?” Barrett said. “So if it has its own self-destruct mechanism where it says, ‘Hey, Grutter says we got to call it quits because they’re just not working,’ are we obligated to give more time?”

Norris responded that Harvard has not indicated it will stop using race. “I think 20 years is enough to call it,” he said.

Thomas and Justice Neil Gorsuch questioned Harvard’s lawyer Seth Waxman, a former solicitor general, over the university’s admittance of wealthy students and its preference of athletes and children of alumni.

“The record shows that Asian student applicants get the lowest personal scores of any other group,” Alito said. “What counts for that? It has to be one of two things. It has to be that they really do lack integrity, courage, kindness and empathy to the same degree as students of other races or there has to be something wrong with this personal score.”

Waxman responded that the scores were based on teacher and guidance-counselor recommendations. He also relied on the lower court’s finding that there was no credible evidence that corroborated discrimination against Asian American applicants in the personal rating.

“Putting aside the teacher recommendations or guidance counselor recommendations … I still haven’t heard any explanation for the disparity between the personal scores that are given to Asians,” Alito said. “They rank below whites, they rank way below Hispanics and really way below African Americans. You’re talking about hundreds of applicants, maybe thousands. What is the explanation for that?”