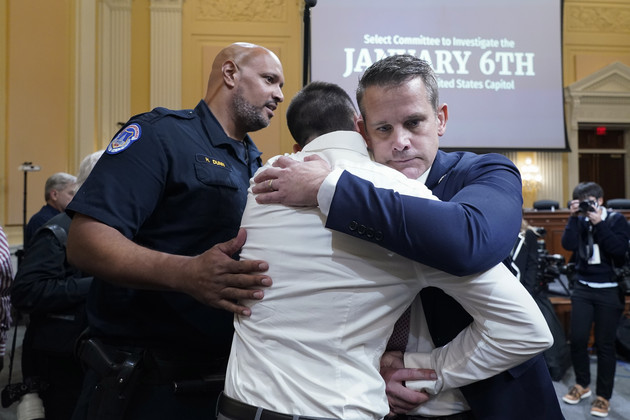 Rep. Adam Kinzinger said Sunday that the House’s Jan. 6 select committee is not sure what will happen next if former President Donald Trump declines to testify after being issued a subpoena.

“He’s made it clear he has nothing to hide is what he says,” the Illinois Republican said on ABC’s “This Week,” “so he should come in on the day we ask him to come in to. If he pushes off beyond that, we’ll figure out what to do next.”

The Jan. 6 panel voted last week to bring in Trump to testify before it. “We have left no doubt, none, that Donald Trump led an effort to upend American democracy that directly resulted in the violence on Jan. 6,” the panel’s chair, Rep. Bennie Thompson (D-Miss.), said Thursday as members approved the subpoena.

When asked by host George Stephanopoulos whether Trump should be held in contempt if he declines to testify, Kinzinger said that was up in the air.

“That’s a bridge we cross if we have to get there,” he said.

Other current or former presidents have testified before Congress on various matters, including Abraham Lincoln, Theodore Roosevelt and Gerald Ford, though none under circumstances quite like the one stemming from the investigation of the riots at the Capitol on Jan. 6, 2021.

“Granted that, you know,” Kinzinger said, “this is not an unprecedented move by Congress, but it’s also, we recognize, it is a big deal. It’s a big move.”

The former president responded to the panel with a 14-page statement that repeatedly condemned the committee — “Despite very poor television ratings, the Unselect Committee has perpetuated a Show Trial the likes of which this Country has never seen before” — and also offered a long string of allegations about the 2020 election being stolen, some anecdotal in nature, some long-disproved and/or rejected in court.

“He’s required by law to come in and he can ramble and push back all he wants,” Kinzinger said. “That’s the requirement for congressional subpoena, to come in.”

Kinzinger, who is not seeking reelection, is one of two Republicans on the nine-member House Jan. 6 committee, along with Rep. Liz Cheney (R-Wyo.). He said he expects that American democracy will ultimately bounce back from the events of Jan. 6.

“Look, what happened on Jan. 6 was terrible,” he said. “What led up to that, and what happened since, is what I’m more worried about, and democracies are not defined by those bad days but how we come back from those bad days. This is that process. This is laying out before the American people and determining we can never do this again. ”