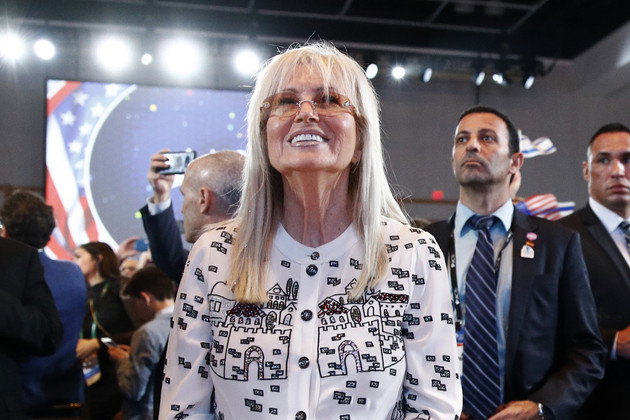 Former President Donald Trump and a host of other Republicans are preparing to run for the White House in 2024. But the party’s most prominent megadonor wants nothing to do with the fight.

Republican benefactor Miriam Adelson has told would-be GOP presidential candidates that she doesn’t intend to get involved in the party’s 2024 primary, according to two people with direct knowledge of the discussions. With prospective candidates already maneuvering to win over donors, Adelson’s decision takes off the board the party’s most sought-after funder.

Adelson, the widow of the late Las Vegas casino mogul Sheldon Adelson, has spoken to an array of potential candidates over the last year and has relayed that she will be sitting out the primary, regardless of who is seeking the nomination.

Adelson’s team has been bombarded with requests from Republican politicians looking to get face time with her, and some have made pilgrimages to her Las Vegas home. The attention reflects her outsize influence: Over the past decade, she and her late husband spent more than a half-billion dollars on GOP causes.

Adelson’s lieutenants say her decision is driven by a desire to stay out of what could be a bitter fight for the nomination. After supporting former House Speaker Newt Gingrich in 2012, Adelson and her late husband sat out the 2016 primary. They later became major contributors to Trump, spending over $100 million to support his campaigns.

Other major Republican contributors will face their own decisions about whether to engage in the 2024 primary – with the prospect of a Trump comeback complicating the race. While some of the biggest givers rallied to Trump during his presidency, others aligned with the GOP’s more establishment wing remained cool to him.

One of the party’s biggest donors has tipped his hand as to whom he may back. Tech billionaire Larry Ellison has contributed $20 million to a super PAC aligned with South Carolina Sen. Tim Scott, a potential contender who has been crisscrossing the country ahead of this year’s midterm elections.

Many candidates have been making aggressive efforts to woo contributors – including Virginia Gov. Glenn Youngkin and Pence, both of whom recently hosted retreats attended by donors.

Adelson, a physician and the majority shareholder of the Las Vegas Sands Corporation, began meeting with potential candidates last fall, after observing a period of mourning following the Jan. 2021 passing of her husband. While she has made clear she has no interest in wading into the 2024 race, she has played an active role in this year’s midterm elections, so far donating $10 million to Congressional Leadership Fund, the principal GOP House super PAC.

During a trip to Washington earlier this year, she met separately with Senate Minority Leader Mitch McConnell and House Minority Leader Kevin McCarthy, where she received briefings on the 2022 campaign, according to a person familiar with the discussion.

Biden: I don’t think Putin will use nuclear weapons