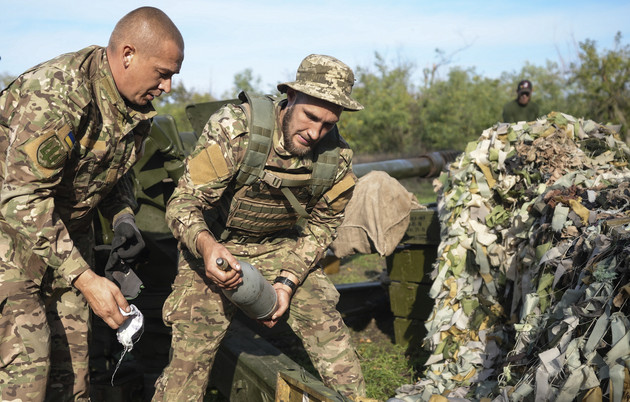 The U.S. assesses that Ukraine’s battlefield gains on the eastern and southern fronts over the past three days are strategically important, but Kyiv is still far from a decisive victory, according to U.S. officials.

In the east, Kyiv’s forces over the weekend captured the city of Lyman, a strategic railway hub, and continued to push east into the Donetsk region. In the south, Ukrainian soldiers broke through Moscow’s defensive lines in the Kherson region, gateway to the port city of Odesa.

These gains are a significant blow to Vladimir Putin, coming just days after he declared that Russia is annexing those regions — Donetsk and Kherson — as well as Zaporizhzhia and Luhansk after a series of sham referendums last week. On the home front, Putin is also facing challenges in mobilizing new troops for the fight, with reservists showing up with little training or equipment.

“What we might be here is really at the precipice of really the collapse of the Russian army in Ukraine,” McMaster said. “They must really be at a breaking point.”

But current officials cautioned that Kyiv’s most recent gains should not be overstated, and that Russian forces are holding steady in other areas such as nearby Bakhmut, in the Donetsk. In the north, Russian forces are shelling the town of Kupiansk, which Ukraine continues to defend, the senior military official said.

The fight in the Donbas will be particularly grueling, as Russian forces are fighting from existing trenches and shelters they’ve held for years.

“There’s lots of heavy fighting ahead,” said a Defense Department official, who like others quoted in this story asked for anonymity to discuss internal assessments. Another U.S. official added: “It’s important strategically, but they still have a long way to go.”

The Pentagon assesses that Russian forces have retreated east from Lyman to the city of Kreminna, consolidating there to rebuff any further Ukrainian advances, a senior military official said.

Moscow had been using Lyman as a logistics hub for resupplying forces along Russia’s forward line from Kharkiv to Kherson, so its liberation “is a significant operational accomplishment,” the military official said.

The advances in Kherson on Monday, meanwhile, represent a breakthrough after the incremental progress experienced by Ukrainian forces since they began their southern counteroffensive in September. Ukrainian troops burst through Russia’s defensive lines and advanced rapidly along the western bank of Dnipro River on Monday, recapturing a number of villages and threatening resupply lines for thousands of Russian troops.

In Kherson, Russian forces are essentially “in a defensive crouch,” the senior military official said.

“It shows the Ukrainians are capable of multiple operations,” said Mick Mulroy, a former deputy assistant secretary of defense and retired CIA official. “It also will be key to follow-on operations to include potentially taking control of water supply for the Crimean peninsula.”

Looming over the battlefield gains is the simmering threat that the conflict could turn nuclear. Western officials are concerned Putin could use the annexations as an excuse to claim Ukrainian forces are attacking Russian territory and escalate the conflict, including potentially using a tactical nuclear weapon.

The U.S., however, has not received any indications that would prompt it to change its strategic posture, National Security Council spokesperson John Kirby said on CNN Monday, adding “we’re watching this as closely as we can.”