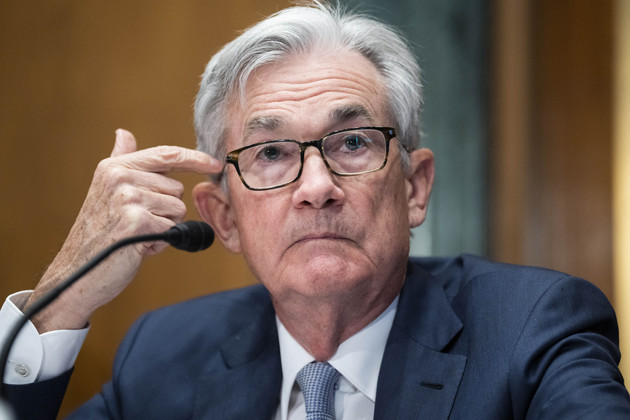 Federal Reserve Chair Jerome Powell and other Fed policymakers are making crucial decisions based on data that lately has been so confusing and contradictory that it's hard for them to know where the economy actually stands. | Tom Williams/Pool via AP

Federal Reserve chief Jerome Powell has vowed to follow the data in deciding how high to crank up interest rates to crush the worst inflation surge in four decades.

But Powell and other Fed policymakers are making that crucial decision based on data that lately has been so confusing and contradictory that it’s hard for them to know where the economy actually stands.

Economic growth is projected by some analysts to have been negative in the second quarter of the year, but hiring is strong and the jobless rate sits near historic lows. Consumers say they’re unhappy about the economy but are still spending even amid the aggressive price spikes. Supply chains are improving, but manufacturing output is slowing. And Covid cases are skyrocketing again even as America fully reopens for business.

That means as Fed officials gear up for another supersized interest rate hike that’s likely to send the economy and markets through convulsions, they’re doing so without a clear line of sight at their target. That uncertainty heightens the risk that they’ll either do too much — triggering a severe recession — or too little, prolonging red-hot inflation and making it harder to conquer.

The Fed is “putting together a puzzle where the pieces were miscut and they just plain don’t fit together,” said David Wilcox, who led the central bank’s research division from 2011 to 2018. “Where is the economy today, and what direction is it headed? All of our measures, no matter how richly assembled, provide only an imperfect and somewhat out-of-date perspective on those key questions.”

One illustration: When the Fed raised rates in June, it opted for the biggest hike in almost 30 years, a decision that Powell said was partially based on indications that consumers had raised their expectations for future inflation. Shortly after the Fed’s move, that data was revised to suggest that expectations had not actually shifted much at all.

Behind the confusion is the extraordinary upheaval the country has gone through in recent years. The economy has been deeply disrupted by the pandemic, price spikes not seen in decades, unexpected supply chain snarls and Russia’s war in Ukraine. That makes the most recent data simultaneously more important and less reliable.

Routine adjustments based on seasonal factors are now much more difficult, as forecasters try to parse which data indicates the economy is slowing, what’s merely a blip and what indicates more structural transformations in society.

“The economy has been changed,” said Nela Richardson, chief economist at payroll processing firm ADP. “It’s been tilted off its axis, and we’re not sure what angle it’s been tilted at.”

Even in the best times, real-time measures of economic health are imperfect. Government data on inflation and jobs is reported with a lag and then updated over time as better information becomes available. The broadest gauge of economic activity — gross domestic product — is compiled using a whole host of data sets that are each then individually revised.

After a strong labor report earlier this month, Atlanta Fed President Raphael Bostic said on CNBC that the economy still appears to be strong — despite real-time forecasts published by his own regional Fed branch that suggest GDP growth was negative in the second quarter. If that forecast is backed up by formal government estimates on July 28, following a similar decline in the first quarter, it would meet one technical definition for a recession.

Still, GDP numbers often undergo heavy revisions even years later as more precise data is finalized, such as tax return information from the Internal Revenue Service and annual manufacturing surveys. And many of the factors contributing to shrinking GDP in recent months are technical in nature — companies stocked up goods for their back rooms and so aren’t adding as much to that inventory, or the dollar has strengthened, making imports cheaper and feeding the trade deficit.

Fed Governor Christopher Waller in a recent speech said he’s not putting too much stock in GDP numbers yet.

“While first-quarter real GDP is now estimated to have shrunk by 1.6 percent, according to another estimate real gross domestic income increased by 1.8 percent,” he said. “GDP and [gross domestic income] are basically measuring the same activity in different ways, and in the past when such wide gaps in the two numbers have appeared initially, they tend to move toward each other when the data are finalized.”

Meanwhile, while some important indicators are more easily quantifiable, like industrial production, others, such as the value of technological innovation, are less so. Real-time employment data gathered in surveys by the Labor Department has been plagued lately by lower response rates by companies, while consumer expectations about inflation have become murkier because the range of opinions is so much wider than it was before.

“All data is fragile in its own special way,” said Skanda Amarnath, executive director of worker advocacy group Employ America.

For now, Fed policymakers seem convinced that the economy is still fundamentally strong, suggesting they are leaning more heavily on data about the job market, which is generally a clearer and timelier indicator of the economy’s health as a whole. But even here, there are indications that layoffs have begun ticking up, and wage growth has begun to decelerate. On Thursday, the Labor Department reported that initial jobless claims totaled 251,000 the previous week, the highest level since mid-November.

“You have to figure out, what should I infer from this data?” said Claudia Sahm, another former Fed economist who is now a senior fellow at the Jain Family Institute. “As you get more and more pieces of data, then you look at them and you say, does that fit with my story? And if you get enough pieces of information that don’t fit, then you rewrite the story.”

One way that the Fed tries to overcome the shortcomings in data is by gathering information from a lot of different sources, said Wilcox, now an economist with the Peterson Institute for International Economics and Bloomberg Economics.

For example, information from card processor First Data can be used to pinpoint regional factors in the national retail sales figures, which provide insight into the strength of consumer spending — a key variable in forecasting inflation. The central bank also uses data from ADP, which tracks actual payroll transactions of 26 million companies, to supplement employment surveys from the Labor Department to get a larger snapshot of the job market.

ADP’s Richardson said the firm is also revamping its national employment reports to make them more frequent as well as more independent from government data; it will no longer attempt to forecast the monthly government jobs report.

Consumer sentiment surveys conducted by the University of Michigan and the Conference Board are unusually divergent. Interpreting those signals is important because declining sentiment is almost always a reliable indicator of when the economy might soon enter a recession.

“Our consumer sentiment index is a place where consumers are going to tell us about their complaints about inflation,” she said, while the Conference Board’s survey more heavily reflects Americans’ continued optimism about the labor market. That optimism is likely why consumer spending has remained strong even amid widespread gloom, she added.

“We’re coming out of a situation where over a million people died, and there were economic lockdowns, and we’re in a time of incredible political polarization which affects people’s feelings about the country,” she added. “We have no historical precedent for this.”