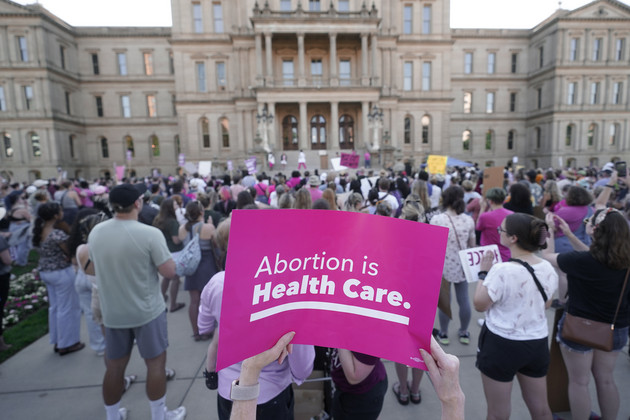 While abortion-related initiatives are also on the ballot in California, Kentucky, Montana and Vermont, the outcome in Michigan will have the starkest impact — determining whether the state’s 1931 anti-abortion law remains on the books. | Paul Sancya/AP Photo

LANSING, Mich. —The country’s highest-stakes battle over abortion rights is unfolding in Michigan, where polls show voters appear likely to add an explicit right to the procedure in their state constitution.

While abortion-related initiatives are also on the ballot in California, Kentucky, Montana and Vermont, the outcome in Michigan will have the starkest impact — determining whether the state’s 1931 anti-abortion law remains on the books.

That law, which provides no exceptions for rape or incest, has been blocked by two different lower state courts, though the injunctions could be lifted by the Michigan Supreme Court should the amendment on the ballot in November fail.

If the amendment passes, the state would become the first to overturn an anti-abortion law since the Supreme Court overturned Roe v. Wade in June. A yes vote would also bolster abortion rights advocates’ conviction that ballot initiatives are their most viable path to restoring access in Republican-controlled states. Coming on the heels of August’s decisive victory for the abortion-rights side in Kansas, it would likely fuel efforts to put the issue on ballots in several more states in 2023 and 2024.

The Michigan amendment failing, however, would support anti-abortion advocates’ arguments that Kansas was a fluke fueled by confusion and misinformation, and that Republican efforts to paint Democrats as extremists who want no restrictions on abortion are an effective campaign tactic.

The contest has pushed abortion to the forefront in races up and down the ballot in the swing state, with Democratic Gov. Gretchen Whitmer, Attorney General Dana Nessel and a host of state House and Senate candidates pitching themselves as the last line of defense for reproductive freedom, regardless of the outcome of the referendum.

“I’m fighting for everyone’s right to make the decision they want to about their own bodies,” Whitmer told POLITICO. “A governor absolutely impacts the right to choose.”

Whitmer’s GOP opponent Tudor Dixon opposes abortion except to save the life of the parent. But as each side tries to win over moderate Republican voters upset with Roe being overturned, she has argued the ballot measure gives them a chance to both preserve access and vote for a Republican.

Dixon told POLITICO following the gubernatorial debate in Grand Rapids on Thursday that the ballot initiative and her race are “two separate issues,” adding that “a judge has already decided this.”

“The governor is trying to run on abortion because her record is so bad,” she added.

In the final sprint to Election Day, both sides are pouring money into TV ads, mailers, phone banking as well as recruiting staff and thousands of volunteers to knock on doors across the state.

The campaigns are pitching their message in churches, on college campuses, at local chambers of commerce and in labor union halls, with each side painting a bleak picture of what could happen in the state if they lose.

“Michigan could become Texas,” warned Nicole Wells Stallworth, the executive director of Planned Parenthood of Michigan and a co-leader of the Reproductive Freedom For All ballot campaign. “Voters in Michigan have a chance to make sure we don’t become one of those other states where they would potentially be criminalized for accessing the basic health care they’ve been able to access for nearly the last 50 years.”

The anti-abortion rights groups argue that Proposition 3 goes well beyond overturning the 1931 law or codifying Roe. In TV and radio ads, and when canvassing door-to-door, they say the initiative would eliminate all of the state’s restrictions and regulations on abortion — an argument Democratic officials and some law professors in the state dispute. In particular, anti-abortion advocates claim passing the amendment would abolish the state’s existing parental consent requirement, an argument they believe can peel away support, even from Democrats.

“What I’m hearing when I’m out canvassing is that voters may support abortion but they don’t want to go that far,” said Christen Pollo, the spokesperson for Citizens to Support Michigan Women and Children, which is leading the fight to defeat the referendum.

Nessel insists this is misinformation.

“I absolutely reject that premise,” she told POLITICO. “I mean, you can’t vote until you’re 18. And while there’s a Second Amendment right to gun ownership, we don’t let children purchase firearms. We have so many rights that we hold to be sacred but that doesn’t mean we can’t impose limits on those rights as it pertains to a person’s age.”

The abortion-rights camp got a significant head start in fundraising, amassing more than $8 million before the amendment was certified, according to disclosures filed to the Secretary of State’s office. This haul, fueled by large donations from national organizations like the ACLU, NARAL, the Center for Reproductive Rights and Planned Parenthood, has allowed their campaign to run ads in every media market in the state, Reproductive Freedom For All told POLITICO.

Anti-abortion advocates told POLITICO earlier this summer that they were hesitant to start campaigning in earnest before they were sure the amendment would be on the ballot — which didn’t happen until the Michigan Supreme Court ruled in September.

As of July, the anti-amendment side had raised roughly $300,000, largely from anti-abortion advocacy organizations and faith-based groups — primarily the Catholic Church, according to the most recent campaign finance report filed with the Secretary of State. Recent TV ad purchases suggest a surge in their fundraising, with the campaign spending more than $4 million on commercials in September and October, according to AdImpact, a media tracking firm. Many conservative and religious groups in the state are also spending independently in the race and cutting their own ads to persuade people to vote no.

With early voting already underway, each side is also knocking on doors to deliver their message face-to-face and remind voters what’s at stake.

As members of the Reproductive Freedom for All campaign canvassed last week in a suburb of Lansing, awash in fall colors, they urged residents to pass the amendment to ensure that “we don’t go back 50 years” on women’s rights. They warned that, without it, doctors could be prosecuted for decisions they make when confronting “serious medical complications that happen during pregnancy,” people could turn in their neighbors and family members, and residents could have to travel across state or national borders for the procedure. Passing the amendment, they argued, “puts us back to where we were on June 24” — the day the Supreme Court overturned Roe v. Wade.

Most voters who answered the door appeared receptive.

Anthony Patino, a Lansing resident who works for a pharmaceutical company, told POLITICO that he’s upset by the Catholic Church’s backing of the anti-amendment campaign, arguing they’ve “lost their way.”

“People should be able to decide for themselves. That’s why God gave us free will,” he said, stepping out onto his porch, the television playing in the background. “I can’t believe my own religion can’t understand that. They want to control the rest of us. But not all Catholics and not all religious people feel like they do.”

The next afternoon, an hour away in Wyoming, just south of Grand Rapids, volunteers with Students for Life, a national anti-abortion group opposing the amendment, handed out leaflets in the pouring rain.

“Our message is that Proposal 3 is beyond the pale,” Titus Folks, an organizer with the group Students for Life based in Indiana who has been leading teams of student volunteers to knock on doors in Michigan — part of the group’s national plan to knock on 250,000 doors in 33 states ahead of the midterms. “Even people who are pro-choice believe there should be a cutoff somewhere, and they’d rather see the [1931 law] amended incrementally over time than have this drastic shift with the amendment.”

Yet views on the referendum in the purple-but-trending-blue part of the state were mixed.

While some enthusiastically agreed with Folks’ argument that the proposed amendment goes too far in lifting restrictions on abortion, others took one look at his shirt reading “The pro-life generation votes” and slammed the door.

“I’m concerned about eliminating every single abortion, especially if the mother is going to die or the child is going to die — I don’t agree with that,” said Kristy Bachert, who told Folks she remains undecided. “There are circumstances where it should be allowed.”

With recent polls showing more than 60 percent support for the amendment, Folks and other anti-abortion advocates lamented Dixon, the state’s top GOP nominee, isn’t using her platform to help defeat it.

“It is frustrating,” Folks said. “A lot of [Republicans] are staying quiet about it. But I understand the strategic decision, and we can’t control them. And if they are scared of the issue, I’d rather them be quiet than try to throw us under the bus.”

Democrats such as Nessel, meanwhile, have made abortion a top issue in their races — and argue their election is still important to ensure the procedure remains legal even if the amendment passes and a crucial backstop if it fails.

“Just because you codified our state constitution to include these rights — the fight is not over,” Nessel told POLITICO. “Even assuming that it passes, there will be legal challenges. And it’s going to be up to the Attorney General’s office to defend the law.”

A group of seven county district attorneys — who collectively represent most areas where abortion clinics operate — have pledged not to enforce the 1931 law should a higher court allow it to take effect. But Eli Savit, the Washtenaw County District Attorney whose jurisdiction includes Ann Arbor, stressed these promises aren’t enough to give abortion providers in the state assurance that they can practice.

“I call it a ‘belt and suspenders and Velcro approach,’ to make sure this 1931 law doesn’t spring back into existence,” Savit said. “But everyone involved in this is aware that the litigation measures and prosecutorial discretion — us pledging not to prosecute abortion — those are only Band Aids. Even if our side ultimately prevails in litigation, we’ve seen in other states and at the federal level that a change in membership on the court can result in a quick backtracking on reproductive freedom.”

Backers of the ballot amendment say amid this multi-pronged strategy, it’s their most potent weapon.