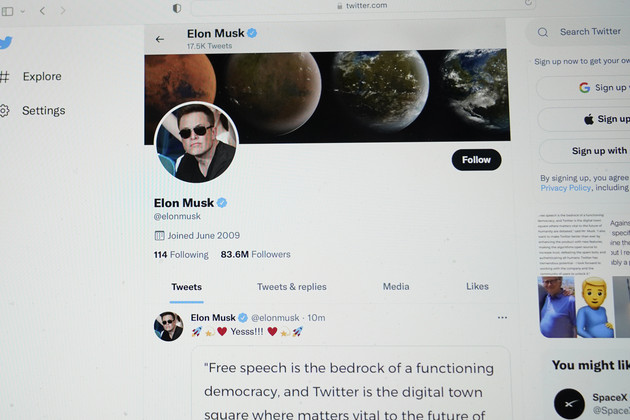 Last night’s rollout of a new policy in which Twitter users could purchase “blue check” verifications for $8 a month uncorked a wave of bogus accounts, each bearing a blue “verified” check, impersonating a swath of public figures. | Eric Risberg/AP Photo

Elon Musk’s Twitter came under sudden and unusual fire from the Federal Trade Commission in Washington Thursday, after a chaotic 24 hours in which new subscription rules triggered a raft of fake “verified” accounts, and key privacy and security executives quit.

Many have been taken down, but with half its workforce laid off, the company has struggled to contain them.

Amid the changes, Twitter’s top cybersecurity officer resigned in the past day and Twitter’s chief privacy officer and chief compliance officer have resigned in the last 24 hours, according to an internal Slack message from an attorney on the company’s privacy team. The slack message, obtained by POLITICO and first reported by The Verge, says all three company officials resigned yesterday.

Additionally, Yoel Roth, Twitter’s head of trust and safety, left the company, according to a person familiar with the matter. In the days following Musk’s takeover, Roth often offered public assurances that the company still had measures in place to keep hateful content off the platform. Roth had been with Twitter for seven years. Robin Wheeler, the head of the business unit that deals with advertisers, had also reportedly resigned, but later in the day it seemed she decided to stay.

The turmoil brought a sharp warning from federal regulators on Thursday. A spokesperson for the Federal Trade Commission said, “We are tracking recent developments at Twitter with deep concern,” adding that “[n]o CEO or company is above the law, and companies must follow our consent decrees.” The FTC statement is an unusual move from a regulator that rarely issues statements ahead of enforcement actions.

Twitter is currently under two consent decrees from the FTC over past security and privacy violations. It was fined $150 million in May for violating its first consent decree from 2011, and the company remains under watch for any future violations. “Our revised consent order gives us new tools to ensure compliance, and we are prepared to use them,” the FTC spokesperson said on Thursday.

With regulators looking on, the platform itself remained besieged by fake accounts.

A “Joe Biden” account tweeted obscene jokes before being taken down; a fake Rudy Giulani offered to fight Alan Dershowitz. The fake account wave has also hit the sports world, where a “verified” account impersonating LeBron James asked for a trade.

Though these were removed, a separate set of accounts for political figures with verified blue checkmarks have emerged with the word “parody” in their handle, as a way to evade suspension. Musk had tweeted on Nov. 6 that accounts that don’t specify they are parodies will be suspended. A fake account for New York gubernatorial candidate “Lee Zeldin (parody),” for instance, seems to have met Musk’s standards and remained up Thursday morning.

Twitter’s changes are driven by a rapid decision by Musk to open the company’s “verified” status to any user willing to pay for a $8 monthly subscription service, known as Twitter Blue. The subscription is an effort to boost returns on the $44 billion he spent buying the platform; Musk also said the new service would help weed out spam and fake accounts.

So far it appears to be doing the opposite: The paid accounts automatically include a “blue check” verification badge, so users are spending the money and then setting up accounts to impersonate public figures, like this one pretending to be Tony Blair tweeting about the Iraq War.

Many of them have been quickly suspended, but not before the posts and screenshots go viral. Musk said that accounts that engage in “impersonation, trickery or deception” will be actively suspended.

Thursday’s internal warning from a Twitter attorney raised serious concerns about how quickly Musk is forcing the company’s engineers to make changes — and how it could lead the company straight into a future FTC violation.

“Over the last two weeks, Elon has shown that he cares only about recouping the losses he’s incurring as a result of failing to get out of his binding obligation to buy Twitter,” the Slack message said.

The rollout of the verification feature would typically be much slower to ensure compliance with privacy laws and other regulations, but Musk’s frantic pace has meant that the process is now an engineer’s responsibility, according to the letter.

“I anticipate that all of you will be pressured by management into pushing out changes that will likely lead to major incidents,” the letter said.

On top of these issues, Twitter’s lawyers are also raising concerns that Musk is willing to take on the FTC, risking billions of dollars in fines for the company.

“I have heard Alex Spiro (current head of Legal) say that Elon is willing to take on a huge amount of risk in relation to this company and its users, because ‘Elon puts rockets into space, he’s not afraid of the FTC,’” the attorney’s letter said.

The FTC’s enforcement capabilities are significantly enhanced because of Twitter’s past consent decrees.

Part of the required audits under Twitter’s agreement means that the company has to have an assessor evaluating its privacy and security programs — who the FTC can talk to at any time to determine if there are any red flags it should investigate. The company also has subpoena capabilities that can compel Twitter employees to talk under penalty of perjury, all of which is admissible in court.

These investigations can take up to a year, and past violations as well as harm caused often factor into penalties.

The expanded Twitter Blue subscription service is intended to replace the legacy blue check marks that government officials, journalists and other notable figures had earned since 2009. Musk said he doesn’t like the current two-class system of those with and without blue checkmarks. Also on Thursday, Musk tweeted that he plans to remove legacy blue checkmarks “in the coming months.”

“It is leveling the playing field here. It will be less special obviously to have a checkmark, but I think this is a good thing,” Musk said in a Twitter Spaces event with advertisers yesterday. “I don’t like the lords and peasants situation where some people have blue checkmarks and some don’t.”

However, a top advertising firm had recommended its clients — which spend more than $40 billion globally — suspend ads on Twitter due to trust and safety concerns for their brands under Musk’s leadership.

Since 90 percent of Twitter’s revenue is driven by ads, Musk appears to be pushing the launch quickly to recoup lost ad money, as advertisers leave the platform over concerns about the recent proliferation of hate speech and conspiracy theories about Paul Pelosi from Musk himself.

Everyone — including advertisers — will have to pay for the new blue checkmark, the billionaire said.

Though Thursday’s chaos is very much a product of Musk’s abrupt changes to the platform, it also recalls Twitter’s earlier days, before disinformation-policing became a public priority and companies put up stricter guardrails around fake accounts.

The name of Trump’s own account, @realdonaldtrump, evokes a time on Twitter when celebrity impersonations were common, and fake corporate accounts could even have their own fans.

Given the rise of deliberate disinformation, election monkeywrenching and Russian bots, however, the stakes around social media have grown since then, and experts worry that re-opening the doors to Twitter as a paid free-for-all could have civic repercussions far outside Twitter’s newsfeed.

Erin Banco contributed to this report.