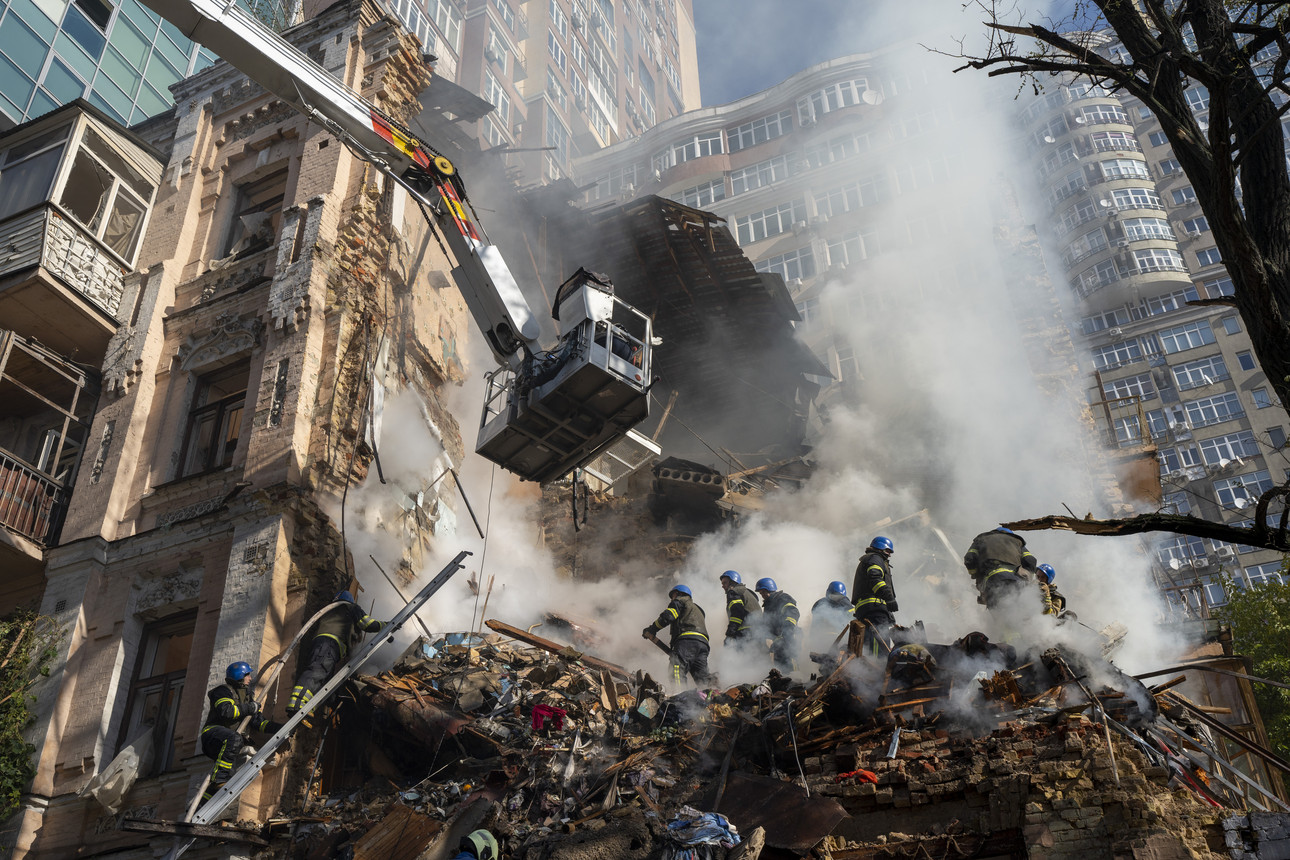 Iranian-made drones are pounding civilian targets and infrastructure, a civilian terror campaign that has already damaged about 30 percent of Ukraine's power-generating capabilities, according to Kyiv. | Roman Hrytsyna/AP Photo

Western countries are speeding up shipments of winter clothing, new rounds of artillery and counter-drone defenses to Kyiv as Ukrainian and Russian forces prepare for a months-long grind amid the mud and ice.

Both sides have fought to gain advantage before the freeze sets in, but Ukraine has moved fast and with discipline since the summer, executing quick campaigns that recaptured thousands of miles of territory that has them now pressing on the strategic southern city of Kherson. It’s an area that will see brutal fighting as artillery shells and frozen temperatures become the most feared foes on both sides of the front line.

“I think we’ve seen a real shift in the last three months,” one Western official told reporters on the sidelines of a NATO summit in Brussels last week. “The Ukrainians are on their front foot, and they certainly feel prepared for the winter campaign. The donation packages that are going to Ukraine are very much [focused on] the winter.” The official, like others quoted for this article, asked for anonymity to give candid assessments of the war.

How to support Ukraine over the long winter was a main topic of discussion at the conference, which brought defense ministers and military leaders from 50 countries together to discuss next steps in the war effort. On Tuesday, British Defense Secretary Ben Wallace flew to Washington on an unannounced, one-day trip to huddle with Defense Secretary Lloyd Austin and White House staff, and a senior U.K. defense official said the coming winter fight was on the agenda.

Even with the remarkable gains made by Ukrainian troops since August, in which they recaptured vast swaths of the east and south, there is little sense among allies that the fighting is anywhere near its conclusion.

Instead, many NATO officials see the campaign entering a slower but no less bloody phase, as entrenched forces launch artillery, rocket and drone attacks to unseat and unnerve the other. Meanwhile Kyiv will scramble to keep the power — and the heat — pumping amid Russian missile barrages clearly meant to terrorize the civilian population.

Winter fighting can be exceptionally difficult, but holding frozen ground for days or weeks on end can also sap the will of a fighting force — particularly an occupying army — another NATO official in Brussels told reporters. “If you’re fighting in those conditions, if your tank is always getting stuck, if it is always throwing a track and you’re constantly cold and wet, it affects what we would call the moral component of an army,” the official said.

Ukrainian troops will struggle under the same conditions, but they have the motivation of fighting for their own homes, as well as a reliable pipeline of new equipment being supplied by Western partners. Several NATO countries have started rushing winter equipment to Ukraine already. This month, Canada announced $15 million worth of winter clothing donations, including 500,000 parkas, pants, boots and gloves pulled from military stocks as well as purchased from Canadian companies.

Estonia also provided two brigades worth of winter clothing. The country’s defense minister, Hanno Pevkur, said in an interview on the sidelines of the meeting that his pitch to allies was that “each country of NATO provide just one or two brigades” worth of winter gear and Ukraine would be assured enough warm clothing to get through the months of freezing weather.

“I think everybody expects that winter will impact the level of activity,” the U.K.’s defense chief, Adm. Sir Tony Radakin, told reporters on a visit to Washington this month. “But I think we’ve got to be cautious overplaying that because this is not grand maneuver warfare. Much of it is skirmishes, artillery battles and seeking opportunities that you then build on.”

The mud and frozen ground will constrain both sides, he said, adding that the fighting won’t be done by massive formations maneuvering quickly, but through a grinding conflict using artillery and drones to try to push frontlines forward or hold ground, yard by yard.

But now the word coming from NATO capitals is that they are all in on helping Kyiv endure the coming months of freezing weather and slogging progress. And top Western officials say they believe Ukraine will keep pushing forward.

Likewise, NATO chief Jens Stoltenberg said that in the coming weeks and months, “our task is to enable them to also be able to conduct meaningful operations throughout the winter and continue to supply them with everything from fuel, winter clothing, tents to advanced weapons systems.”

Conversely, Russian forces continue to fall back, and even began evacuating up to 60,000 civilians to the eastern bank of the Dnipro River in Kherson Wednesday, a move that may be part of a larger Russian military retreat from the key city and the surrounding region. Vladimir Putin also declared martial law in the four Ukrainian districts he recently claimed to annex, a move that may allow for forced conscription there in the dwindling areas Russia still controls.

The Russian pullback comes as Iranian-made drones pound civilian targets and infrastructure, a civilian terror campaign that has already damaged about 30 percent of the nation’s power-generating capabilities, according to Kyiv.

The new Russian campaign is in keeping with its tactic of brutalizing the civilian population as its troops continue to suffer defeats on the battlefield, and is being orchestrated by Putin’s new commander, Gen. Sergei Surovikin, whose nickname of “General Armageddon” was earned in the brutal, civilian-focused air campaign in Syria. The general made a rare appearance on Russian television Tuesday evening, in which he acknowledged the Russian position around Kherson is “very difficult.”

While the West appears to be focused, Russia continues to experience “significant” logistical and sustainment challenges, and those are only going to get harder as winter sets in, said Pentagon spokesperson Brig. Gen. Patrick Ryder.

“Time is certainly of the essence when it comes to capitalizing on that from an operational standpoint,” he told reporters Tuesday. But Ryder acknowledged that the winter months will be difficult for the Ukrainian side as well.

“When you look at things like, you know, rain, snow, mud, the impact that it has on the terrain,” Ryder said, “it definitely will add another level of complexity to an already very-dynamic battlefield.”

Those problems might be borne more heavily by the often lightly-equipped Russian troops who are being forced to rely on supply lines the Ukrainians are intent on disrupting or cutting, and who will have to burrow into hastily dug trenches and fortifications amid a hostile populace.

The chaotic callup of 300,000 Russian reservists, who have flooded social media with videos of conscripts sleeping in muddy fields and warming themselves over makeshift fires while still at collection centers inside Russia, gives a glimpse of how poorly-equipped many Russian units are, and what challenges might await.

Getting proper winter clothing for front-line troops and the tens of thousands of callups expected to flow into Ukraine in the coming weeks will be a massive challenge for Moscow, which has struggled mightily to keep troops supplied since the start of the war.

As Kherson empties out and barely trained and lightly equipped Russian conscripts begin to flow into Ukraine, the war will take a new shape. “I would say Ukrainians are better equipped for it, and they certainly have the motivation to cope with it,” the Western official said.

Lara Seligman and Cristina Gallardo contributed to this report.