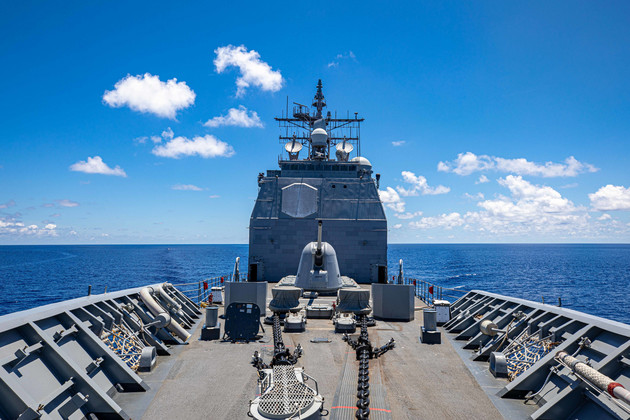 An independent commission is recommending the Navy scrap the name of a guided-missile cruiser that honors a Confederate battlefield victory, part of a broader effort to scrub the names of Confederate leaders from Defense Department property.

In the final installment of a three-part report, the commission that was established to rename bases that honor Confederate leaders announced on Tuesday its recommendation that the Navy rename the USS Chancellorsville, a Ticonderoga-class guided-missile cruiser, and the USNS Maury, an oceanographic survey ship.

In a briefing with reporters after the announcement, members of the commission said the Navy has renamed about 20 ships while they were in active service.

In other cases, ships have been renamed either before or after entering service.

In the 1970s, the Navy changed the name of the Los Angeles-class attack submarine SSN 705 during construction from Corpus Christi to City of Corpus Christi to appease religious groups. In 2020, the city of Baltimore stripped the name Taney from the ex-U.S. Coast Guard cutter and floating museum because the name paid tribute to the Supreme Court chief justice who delivered the Dred Scott decision cementing the legality of slavery.

Renaming an active ship at this late stage in its life cycle — the USS Chancellorsville entered service in 1989 and is scheduled to be decommissioned in 2026 — is unheard of, experts said.

“I know of no other vessel on the U.S. list in the history of the Navy that would have been renamed seven-eighths of the way through its service,” said Bryan McGrath, a retired naval officer and now managing director of The FerryBridge Group.

“We looked at the entire context and felt as though this commemorated the Confederacy as a unanimous decision among the eight commissioners,” Seidule said.

The Chancellorsville is named for the decisive 1863 Confederate victory by Gens. Robert E. Lee and Thomas “Stonewall” Jackson that paved the way for the Army of Northern Virginia’s invasion of Pennsylvania and the battle of Gettysburg. The ship’s hull reportedly contains bullets and shell fragments from the battle, and as of at least 2016, a painting of Lee and Jackson hung in the wardroom.

The Navy named most of its Ticonderoga-class cruisers after American battles. While the tradition itself does not seem controversial, this particular battle poses problems, said commission member Kori Schake, the director of foreign and defense policy at the conservative American Enterprise Institute.

“The battle celebrates the Confederates’ elegant tactics and success,” Schake noted. “That makes the decision a little less complicated.”

The conflict was “one of the confederacy’s shining moments,” and some refer to it as “Lee’s perfect battle,” McGrath said.

But for sailors, changing a ship’s name is a bad omen, said Jerry Hendrix, a retired Navy captain and president of Hendrix and Associates. The renamed vessel then becomes “a bad luck ship,” he noted.

And some in the Navy take issue with renaming a ship that has served for so long and has so few years left, experts say. Unlike an Army base, which could stand for hundreds of years, a ship has a limited service life.

”There is very little precedent of a ship that’s been in active service, especially for a number of decades, to have its name changed,” Hendrix said. “From a traditionalist standpoint in dealing with the culture of the Navy, it is a very big deal for a ship that’s been in service for this long.”

The decision also raises questions about whether the Navy will need to rename two aircraft carriers named for southern legislators who advocated segregation: the USS Carl Vinson and the USS John C. Stennis. Neither of the ships were among the Defense Department assets to be reviewed by the Naming Commission.

From an administrative perspective, renaming a ship is a significant undertaking. For example, the name of the ship would have to be removed from the stern; the ship’s bell, which bears its name, must be taken down; and the ship’s stationery must be changed. This will require time, effort and money.

The first installment of the commission’s report recommended the Army rename nine bases that honored Confederate leaders. The second installment focused on assets at the U.S. Military Academy and the U.S. Naval Academy, recommending West Point take down a famous portrait of Robert E. Lee.

The third installment of the report also recommended the services rename a number of other assets, including the Confederate memorial at Arlington National Cemetery and the Air Force’s Fort Fisher Recreation Area in North Carolina. The final cost for all commission recommendations is estimated to be $62.5 million.

As mandated by the fiscal 2021 National Defense Authorization Act, the commission has until Oct. 1 to submit its recommendations in a written report to Congress. Lawmakers and Defense Secretary Lloyd Austin, America’s first Black Pentagon chief, must approve the recommendations.

While in the current political environment the Navy is likely to accept the commission’s recommendation, there has already been some grumbling among veterans. Retired Lt. Cmdr. S.O. Rasbury, a former naval aviator who is Black, wrote in an op-ed last year for Military.com saying the push to rename the Chancellorsville “goes too far.”

“As the Navy considers renaming a couple of its ships of the line, it’s become obvious to even the most casual of observers that the military has gone whole-hog on cancel culture,” Rasbury wrote.

That viewpoint reflects the sentiment of some in the Navy who will grumble about “woke-ism and its impact on the service,” Hendrix said.

But the decision to rename the Chancellorsville will be felt most deeply among those who built and served on the ship, McGrath said.

“For the people who have served on that ship and had fond memories of that ship, I think there would be some significant emotional response — and I would call it warranted,” he said. “That’s all they ever knew of that ship.”