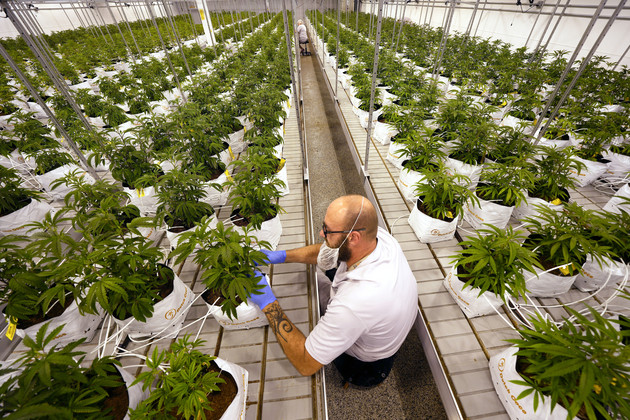 There are now 21 states where anyone at least 21 years old will be able to legally possess marijuana. | Charlie Riedel/AP Photo

More than 155 million Americans will now live in states with legal weed.

Maryland and Missouri passed legalization referendums on Tuesday, meaning there are now 21 states where anyone at least 21 years old will be able to legally possess marijuana.

That marks a seismic shift since Colorado and Washington became the first states to back full legalization at the ballot box a decade ago.

“[It’s] just further evidence that cannabis legalization for adult use is mainstream American public policy,” said John Hudak, an expert on cannabis policy at The Brookings Institution. “That shows you how much progress has happened in American public opinion.”

“This is still something that is not a slam dunk with voters,” said Kevin Sabet, president of anti-legalization group Smart Approaches to Marijuana.

None of the referendums was particularly close. In Maryland, nearly two-thirds of voters endorsed legalization, with just over 80 percent of votes counted. Missourians backed legal weed by 6 percentage points, with roughly 10 percent of the vote yet to be tabulated.

This wasn’t the first time that voters in the Dakotas weighed in on weed legalization. Four years ago, North Dakota voters also soundly defeated a recreational legalization referendum, while South Dakotans backed legal weed for adults in 2020, only to have the state Supreme Court throw out the result.

Tuesday’s election results further deepen the chasm between state and federal cannabis laws. While people will soon be able to legally purchase and use marijuana in 21 states, cannabis remains classified as a Schedule I drug on the Controlled Substances Act, the same category as heroin.

That means cannabis use can still be a disqualifying factor for anyone applying for a security clearance or trying to enter the U.S. military. Cannabis businesses operating in state-legal markets still struggle to open bank accounts or get small business loans to fund their start-up costs.

Congress has passed no significant legislation loosening federal restrictions on the drug, despite strong bipartisan support for bills that would make it easier for cannabis companies to access banking and expand medical research

Last month, President Joe Biden announced he was issuing pardons to people with federal marijuana possession offenses — a move that impacts roughly 6,500 individuals — and directing federal agencies to review whether marijuana should be reclassified under federal law.

“It’s potentially completely transformational for this industry,” said Andrew Kline, an attorney with Perkins Coie and former director of public policy for the National Cannabis Industry Association, of the potential reclassification of marijuana. “It’s the first time that anyone at the federal level is taking a bold action like that.”

Medical marijuana businesses donated heavily to the legalization campaigns in Arkansas and Missouri, marking a shift in how cannabis campaigns are funded. In the past, advocates have struggled to raise money from industry interests.

Legalization campaigns in Missouri and Arkansas raised $7 million and $13 million respectively, mostly from medical marijuana businesses in those states. Industry involvement in drafting and running those initiatives opened them up to criticism from longtime pro-marijuana advocates.

They argued the referendums were written to tilt the recreational market in favor of the existing medical companies that bankrolled the campaigns. That argument seemingly was persuasive with Arkansas voters but failed to prevent the Missouri referendum from passing.

The pro-marijuana advocates came out in force against those initiatives indicates a shift in the legalization debate, particularly as the specter of multi-billion-dollar marijuana companies elicits pushback from both pro- and anti-legalization advocates.

Many of the largest states — including California, New York and Illinois — have already legalized recreational marijuana. But the movement has increasingly made inroads in more sparsely populated, staunchly conservative parts of the country. And that has the potential to shake up the dynamics on Capitol Hill.

Legalization in more states could increase support for piecemeal legislation such as the SAFE Banking Act — a bill that would make it easier for banks to offer financial services to the industry. Sen. Steve Daines (R-Mont.) didn’t support SAFE before his state voted to legalize weed in 2020 and is now a lead sponsor of the bill.

Still, some lawmakers don’t support federal decriminalization, despite legalization in their own states. Sen. Jon Tester (D-Mont.), for example, does not support decriminalization, breaking with both his own party and a majority of voters in his state.

But most advocates on both sides of the legalization debate don’t believe Tuesday’s split verdict on weed legalization is likely to fundamentally alter the calculus of lawmakers.

“We’re at a tipping point already,” said Title, who also served as a cannabis regulator in Massachusetts. “I’m not sure how much of a difference [more states] makes.”

Copper a clue in the fight against cancer