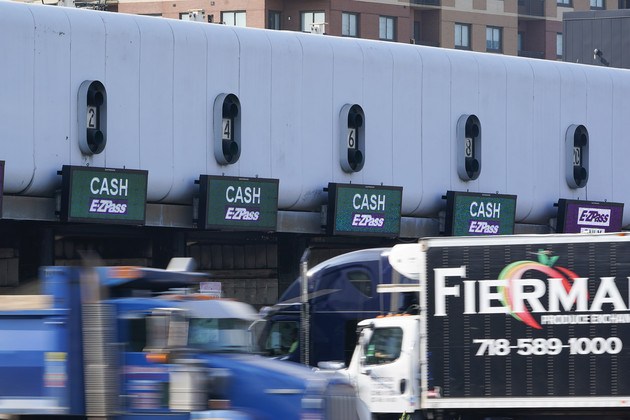 While the Murphy administration is so far keeping a tight lip on the new report, New York Gov. Kathy Hochul’s ally across the Hudson River has made clear his willingness to go “nuclear” on behalf of New Jersey drivers. | Seth Wenig/AP Photo

NEW YORK — Gov. Kathy Hochul is pushing ahead on a congestion pricing plan that would raise billions in revenue for public transit projects and promises to significantly decrease traffic into Manhattan’s central business and tourism district.

But an environmental review of the program shows the difficult political hurdles Hochul will have to overcome, both within state borders and in neighboring New Jersey — where Gov. Phil Murphy, a fellow Democrat, has made his consternation with the plan known.

Congestion pricing would charge drivers extra during so-called peak hours to enter Manhattan’s Central Business District, which is defined as the area south of 60th Street. For years, transit officials have talked about the plan. But until Wednesday, there was little information on what the tolls could look like and whether some drivers could get exemptions or credits. A special panel is ultimately tasked with finalizing those details, but the review provides a first glimpse at how the system could be implemented.

Some of the scenarios proposed by the New York Metropolitan Transportation Authority raise tolls by as much as $23 a day for commuters crossing the George Washington Bridge from New Jersey. All of the proposed options would divert more truck traffic to the Bronx, creating potential political hurdles as New York officials look to get the plan over the finish line.

If implemented, New York will have finally achieved a decadeslong push to implement a first-in-the-nation congestion pricing plan, following in the footsteps of major European cities like London and Stockholm. It would generate much-needed revenue for the MTA, which is projecting a $2.6 billion operating deficit in 2025 because of a nationwide decline in public transit use during the pandemic. And it would successfully curb traffic in the economic hub of New York City, as traffic levels seem poised to surpass the record highs seen in 2019.

“I am a supporter of congestion pricing in principle. That being said, any plan that threatens to intensify diesel truck traffic on the Cross Bronx Expressway would raise serious concerns about public health and racial equity,” Rep. Ritchie Torres (D-N.Y.), whose district includes the South Bronx, said in a statement. “My office and I are carefully reviewing the MTA’s proposal for the environmental impact it would have on the South Bronx.”

While the Murphy administration is so far keeping a tight lip on the new report, Hochul’s ally across the Hudson River has made clear his willingness to go “nuclear” on behalf of New Jersey drivers, once referencing how he could leverage his influence to drag out work at the Port Authority of New York and New Jersey. Hochul is somewhat beholden to lend Murphy an ear, as the two are still hashing out agreements over the proposed expansion and reconstruction of Penn Station in midtown Manhattan.

“While the environmental assessment is under review by New Jersey state agencies and comments will be submitted where necessary and appropriate, the Murphy Administration will not support a double tax of New Jerseyans that provides no direct relief for our state’s commuters,” Murphy spokesperson Bailey Lawrence said in an email.

The release of the environmental review is years behind schedule because of various delays at the federal level.

The MTA waited more than a year to hear from federal officials about the type of review it must conduct to implement congestion pricing; transit officials blamed New York state’s sour relationship with the Trump administration.

Federal approval is required because the plan involves placing tolls on highways that have received federal funding.

Last year, the Biden administration said the MTA was clear to move forward on a 16-month environmental assessment, a timeline advocates and some city officials said was too slow. The assessment then faced additional hold-ups, which the MTA said was because of technical questions posed by the Federal Highway Administration.

Now that the document has been released, MTA officials are significantly closer to securing final approval from the federal government, which would give them the green light to install toll cameras in and out of Manhattan. Top transit officials hope the system is a go by the end of 2023.

The environmental review assesses seven different tolling scenarios, each with different combinations of potential discounts, crossing credits and exemptions. Fares range from $9 to $23 for passenger vehicles and between $12 and $82 for trucks. Some scenarios contemplate exemptions for taxis, while others cap the number of times certain vehicles can be charged in a single day. There are even options under which the MTA’s own buses must pay the toll, effectively resulting in the agency paying itself.

This is on top of existing tolls for the George Washington Bridge and Lincoln and Holland tunnels.

The report found that the plan would achieve its main objective of reducing traffic into central Manhattan by as much as 20 percent for personal vehicles and 80 percent for trucks. Higher toll prices would result in steeper declines in traffic, according to the report.

Only one of the proposed scenarios failed to generate $1 billion in annual revenue for the MTA’s capital plan. A senior MTA official said it was included to show how the combination of lower toll prices and exemptions makes it difficult for the system to meet its mandate under state law to generate $15 billion for the agency’s $54 billion capital plan.

“More than half of New Yorkers travel to work by public transit and commuting into the Manhattan central business district is overwhelmingly by transit,” said Danny Pearlstein, policy and communications director for the Riders Alliance, a public transit advocacy group. “Congestion pricing is going to be a win-win-win for transit riders, drivers and everybody who breathes in this city and we cannot see it through soon enough.

The review also found that every congestion pricing scenario will result in more truck traffic on the Cross-Bronx Expressway and RFK Bridge, as drivers look to circumvent the new tolling structure. The option that posed the least amount of new truck traffic on the Bronx entailed charging every vehicle class the same toll, with a toll cap for some vehicle types. Most of the scenarios also recorded an increase in truck traffic on I-95 in Bergen County, N.J.

In response to those findings, the MTA said it will expand its air quality monitoring and said it’s transitioning its fleet to zero-emission buses and prioritizing new bus lanes in Upper Manhattan and the Bronx.

“There’s no way around the fact that we’re adding a lot of trucks to these Bronx highways,” said Nicole Gelinas, a senior fellow at the fiscally conservative Manhattan Institute, who has voiced support for pursuing congestion pricing.

Murphy wants the MTA to take care of George Washington Bridge drivers by offering them the same credits New York could give drivers entering Manhattan via the Holland and Lincoln tunnels.

But in the one MTA scenario that does what Murphy has asked for, the total cost to New Jersey drivers would actually be more than in scenarios where there is no discount for anybody.

In the MTA’s “base plan,” everybody would pay $9 to come into the central business district.

But in the scenario that looks at discounts — the MTA calls them “crossing credits” — for all bridge and tunnel drivers, the toll would be $23, with a discount of up to $13.10. That means the new toll for a New Jersey commuter would be $9.90 — 90 cents more than a scenario with no discount.

The math appears to torpedo an easy compromise, since it means Murphy getting what he wants would cost New Jersey commuters more than if everybody paid the same new toll. And, of course, anyone who isn’t crossing a bridge or tunnel, including many New Yorkers, would pay $14 more than under the base plan. The scenario makes it hard to see how New Jersey could favor the crossing credit plan, and means New Yorkers would be paying even more.

MTA officials said the plan is good for the region.

“The value of congestion pricing is clear: Less traffic, reduced pollution and more reliable mass transit for the vast majority of commuters, including those in New Jersey, who take trains and buses to Manhattan,” MTA spokesperson Tim Minton said in a statement. That’s a win for the entire region that can’t be disguised by grandstanding politicians.”

Other New Jersey politicians, especially Rep. Josh Gottheimer (D-N.J.), have taken a hard line against any kind of increase on New Jersey drivers. He’s even urging New Jersey businesses to open new offices in the state so New Jerseyans can avoid working in New York offices. While that would certainly cut traffic, which is the whole point of the MTA’s new tolling plan, it could also hurt the city’s tax base and economy that are still recovering from the pandemic.

“If they want to tax people from Mississippi or Wyoming or Kansas, then I don’t care. But you can’t tax New Jersey drivers,” Gottheimer, whose district includes commuter-heavy Bergen County, said in an interview.

The Regional Plan Association, which supports congestion pricing, has also warned about a congestion pricing plan that encourages toll shopping. A few MTA scenarios consider offering discounts for all tunnel commuters but not all bridge commuters, something that could drive traffic to already overwhelmed bottlenecks, like the Holland Tunnel.

The RPA points out that most New Jersey commuters into Manhattan are already taking public transit, not driving. Those commuters would benefit from improved air quality in the region and also increased investment by the MTA once they reach New York. But the new revenue from the tolls does not help fund NJ Transit, which also faces a massive shortfall in coming years and is key for commuters to reach Manhattan in the first place.

Tiffany-Ann Taylor, the association’s vice president for transportation, said she hopes the MTA will be flexible if something isn’t working after the tolls are imposed.

“I understand wanting to get it right as much as possible for the first go,” she said, “but I do hope there will be an opportunity to make adjustments once Day One happens.”