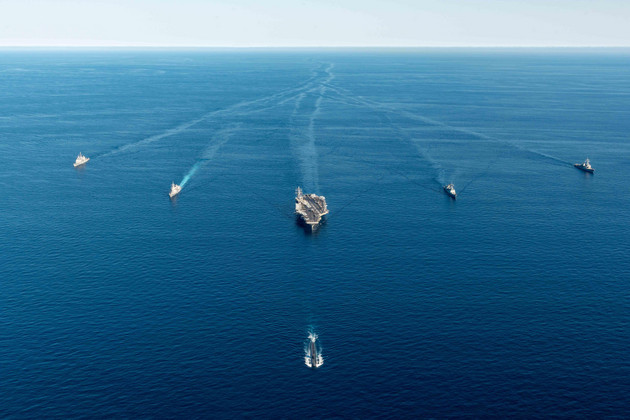 The USS Ronald Reagan, center, is based in Japan and frequently spends its deployments hitting different parts of the Western Pacific. | South Korea Defense Ministry via AP Photo

South Korea’s Joint Chiefs of Staff did not provide any further details on the launch, which they said occurred Thursday morning local time, according to The Associated Press.

The U.S. planned to send a nuclear-powered aircraft carrier to the waters near the Korean Peninsula following North Korea’s missile tests on Tuesday, according to two Defense Department officials, the latest in a series of tit-for-tat military actions in the Pacific this week.

The aircraft carrier USS Ronald Reagan is now in the Sea of Japan, a Navy spokesperson confirmed Wednesday, returning to the area after the warship concluded an exercise with the South Korean and Japanese navies on Friday.

In an immediate response to the launch, four U.S. and four South Korean fighter jets dropped bombs on an uninhabited island in the Yellow Sea, while U.S. and Japanese warplanes also flew together over the Sea of Japan.

But in an embarrassing incident early Wednesday, a South Korean ballistic missile malfunctioned and exploded during a live-fire drill with the U.S. that was designed as retaliation for North Korea’s launch.

“The re-dispatch of the carrier strike group to the Korean Peninsula is highly unusual and shows the resolute will of the South Korea-US alliance to strengthen the alliance’s readiness posture against North Korea’s consecutive provocations and to respond decisively to any kind of provocation and threat from North Korea,” the JCS said.

The Reagan is based in Japan and frequently spends its deployments hitting different parts of the Western Pacific. Before returning to the Sea of Japan, the ship was operating east of northern Japan, according to the U.S. Naval Institute’s fleet tracker.

“This action is destabilizing and shows the DPRK’s blatant disregard for United Nations Security Council resolutions and international safety norms,” she said.

The Associated Press contributed to this report.