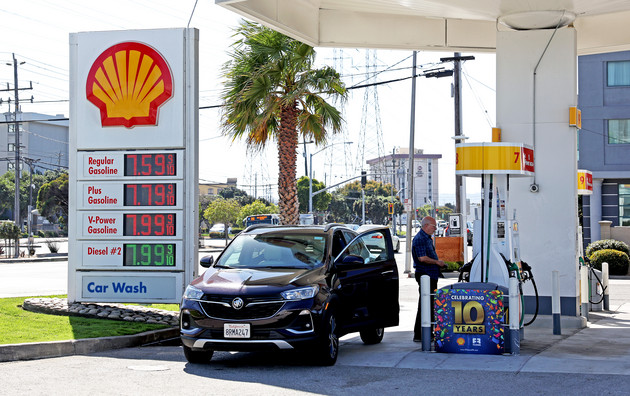 Gas prices over $7 a gallon are displayed at a Shell gas station on Oct. 3, 2022, in South San Francisco, Calif. | Justin Sullivan/Getty Images

OPEC’s move to cut oil exports on Wednesday is feeding an autumn of anxiety for Democrats over energy inflation as prices at the gas pump march higher — particularly in some states and districts that could swing in Republicans’ favor in the midterm election.

After nearly 100 days of declining prices at the pump this summer, a handful of states are seeing an increase that is lifting the national average higher — a trend likely to gain steam with OPEC members set to shrink their oil exports by 2 million barrels per day to support petroleum prices in the face of a slowing global economy.

“It’s a tough week for the Biden administration on oil,” Bob McNally, president of Rapidan Energy, a research group, who was previously a top oil adviser in the George W. Bush administration, said ahead of the OPEC announcement.

Average gasoline prices sat at $3.83 per gallon on Wednesday, nearly seven cents higher than a week ago, but well below the record high $5.01 per gallon average national price reached in June. The White House has touted its tapping of the nation’s Strategic Petroleum Reserve as driving that drop, crediting the release of more than 171 million barrels so far this year for cooling off the market. Those supplies will continue to flow out federal storage facilities through November, but they will pale with the potential drop in OPEC supplies.

“I am concerned, it is unnecessary,” Biden told reporters as he departed the White House Wednesday morning.

The White House said it would release 10 million barrels of oil from the Strategic Petroleum Reserve, in line with the schedule it announced earlier this year to offset the impact Russia’s invasion of Ukraine was having on markets. The administration said it would also work with Congress “on additional tools and authorities to reduce OPEC’s control over energy prices,” White House national security adviser Jake Sullivan and National Economic Council Director Brian Deese said in a press release after the cartel announced the cut.

“At a time when maintaining a global supply of energy is of paramount importance, this decision will have the most negative impact on lower- and middle-income countries that are already reeling from elevated energy prices,” the press release stated.

So far, the recent rebound in pump prices has been centered on the West Coast, where six oil refineries in California and Washington reduced output because of maintenance.

In California, a state that’s expected to have a number of competitive House races, prices have spiked more than $2 per gallon above the national average to the highest level ever in the state, providing Republicans there with a potent line of attack.

Other swing states such as Nevada and Arizona have also seen prices jump, along with Ohio, where a BP refinery explosion last month killed two workers and shut down the plant.

Patrick De Haan, analyst at GasBuddy, said Wednesday he expects OPEC’s decision to boost U.S. gas prices by roughly 15-30 cents per gallon on average. He projects that areas in the West Coast and Great Lakes were prices had already exploded will see declines, while he expects prices to rise in the South, Southeast, East Coast and New England.

OPEC’s move to consider cuts had rattled the White House in recent days, according to a report, and triggered some calls inside the administration to consider blocking some petroleum exports to try to tamp down domestic price increases.

Feeling the pressure, Biden has twice warned oil companies against price gouging in parts of the Southeast throttled by hurricanes, and Energy Secretary Jennifer Granholm last week accused companies of being short-sighted by prioritizing fuel exports over building domestic fuel inventories that would help stabilize prices in the wake of extreme weather.

Another major wild card that could send prices higher is the unpredictable war-time machinations of Russian President Vladimir Putin, who may roil the markets when the European Union starts enforcing an embargo on Russian oil in December. That broad measure that will ban insuring ships transporting Russian oil.

“The Biden administration is looking at a guillotine blade across its neck and it’s going to fall soon,” McNally said. “That is going to cause a really large and sudden drop off in Russian oil production and trigger another oil price spike.”

And earlier this week, EU ambassadors reached an agreement on new sanctions stemming from Putin’s war with Ukraine, including a price cap on Russian oil sales, according to European diplomats.

“The Biden administration has been very concerned about energy costs for many months and the Treasury Department is quite worried about the impact of the EU oil embargo and insurance ban,” said Ben Cahill, an oil markets expert at the Center for Strategic and International Studies. “The oil price cap idea is a defensive move to prevent a worse outcome.”

“It’s clear that OPEC+ is aligning with Russia with today’s announcement,” she said.

U.S. stocks of gasoline, or the amount of extra supply cushion on hand, are well below recent and historical averages, according to the Energy Information Administration, the research arm of the Department of Energy.

“Even though we are in a seasonally softer period for demand, we are still living in a world with pretty tight refinery capacity and challenges overall in terms of the refining sector to produce enough product to meet demand,” said Jeff Barron, a petroleum economist at the EIA. “There are good reasons to believe the uncertainties facing the market today are a bit higher than normal.”

The new developments threaten to disrupt what had been Democrats’ growing optimism about how voters are perceiving gas prices, especially among independents who are key in swaying the outcome of tight races.

The percentage of independents who say gas prices will be higher in six months had declined 10 points — from 49 percent in July to 39 percent — according to a The Economist/YouGov poll from September.

Republicans had expected record-high gasoline prices earlier this year to help fuel their return to power in Congress, and they acknowledge they lost some momentum when prices fell throughout the summer at the same time Democrats have scored legislative victories. But Republicans are still favored to win the House while the Senate is seen by analysts as a toss-up.

“In some places, it could be the case that prices coming down benefits Democrats,” said Sen. Kevin Cramer (R-N.D.). “So does that get them past November? Maybe. At least it’s not as negative an impact as it would have been otherwise. But you still cannot convince somebody that it’s raining when you are peeing down their back – that’s what they are trying to do.”

Meanwhile, the share of Americans who say inflation is their top voting issue has fallen from 37 percent in July to 30 percent, according to a NPR/PBS NewsHour/Marist poll last month.

“The frog has been boiled slowly to the point where the relatively high inflation and high gas prices are just baked in for voters,” said Liam Donovan, a lobbyist with the firm Bracewell who previously worked for the National Republican Senatorial Committee. “The bar was lowered to the floor and now it’s hard for Republicans to make hay of it in the same way as they would have before.”

Zack Roday, campaign manager for Joe O’Dea, a Republican running a competitive race to unseat Democrat Sen. Michael Bennet of Colorado, said his candidate is emphasizing more moderate positions on a range of issues, including climate change and abortion.

“Gas prices coming down is a good thing for the country and has definitely taken some of the anxiety away for voters,” Roday said. “I still maintain it is a gas and grocery election, but you need to add layers to it.”

Michael McAdams, communications director of the National Republican Congressional Committee, said GOP House candidates are prosecuting a “three-pronged attack” that reaches beyond inflation and economic issues to also include crime and border security.

“Our messages will be tailored to match the most important issue set for each district,” McAdams said. “Are higher gas prices the only issue? No, there are a variety of Democrat policies hurting Americans and those are all going to be talked about.

Vulnerable Democrats running for reelection are anxious that gas prices are rising yet again and urging party leaders to continue offering policy solutions.

“I’d still like to see them lower, which is why I continue to call for the suspension of the federal gas tax until January,” said Sen. Raphael Warnock (D-Ga.), who is looking to fend-off GOP nominee Herschel Walker in his red-leaning state.

For now, prices may be low enough to keep the issue in the background.

“The corner gas price is the single most important number in American politics, especially for the party in power,” said Paul Bledsoe of the Progressive Policy Institute, who was a Clinton administration climate change adviser. “When it falls below four bucks, the pressure is off. It’s just a magic number. Biden has taken a more aggressive approach and it’s kinda worked.”

Ben Lefebvre contributed to this report.