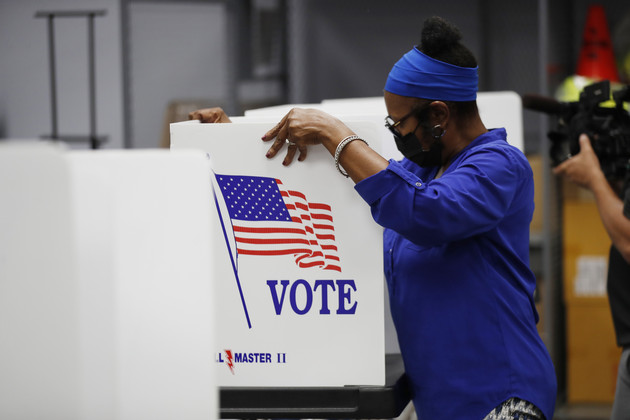 Local and federal law enforcement officials across the country said in interviews Thursday they are ramping up efforts to protect election officials ahead of Nov. 8 — in some cases preparing for potential acts of violence in the coming days.

In areas of the U.S. where pro-Trump supporters spurred lies about the outcome of the 2020 election — including where local officials have recently reported incidents of voter intimidation — law enforcement is adding additional security to poll locations and ballot boxes. Local police departments, in coordination with the Federal Bureau of Investigation, are also focusing on tracking tips related to threats against election workers, officials said.

The added security and protective measures in states like Arizona, Georgia and Michigan underscore the increasing anxiety of officials across the country about political violence after House Speaker Nancy Pelosi’s husband was violently attacked by an individual who promoted conspiracy theories linked to QAnon.

“Election workers have expressed on a regular basis their concerns. They’ve seen what the potential for violence is across our nation. And now they’ve seen just a few folks act in a manner that is intimidating or bullying on the ground here in Arizona,” said Paul Penzone, sheriff of Maricopa County in Arizona where armed people have stationed themselves at ballot boxes in recent weeks. “People are fearful because they’re not sure what to expect.”

The FBI would not respond to questions about how many credible threats against election workers it is currently tracking. But senior law enforcement officials have said they’ve received thousands of tips about threats — both physical and cyber — to election workers between the summer of 2021 and June of 2022.

It’s a long-simmering issue. Local law enforcement officials said they have received multiple reports a day for at least the last two months about election workers experiencing online harassment and physical threats, including threats to their families.

A federal law enforcement official said the FBI and the Department of Homeland Security are dedicating additional resources to investigating threats to election workers and politicians and communicating with local law enforcement about new leads.

“Election officials are being followed home … having death threats shouted at them while they’re leaving the office. You have election officials who have had protesters with guns showing up outside of their homes,” said Lawrence Norden, senior director of the Brennan Center’s Elections & Government Program. “I make no light of the threats and attacks that we’ve seen on congressional members … but we’re talking about people on a very different level who … have had very few resources.”

Penzone said he and his team have additional staff to protect polling sites and drop boxes, including fielding officers in plain clothes to patrol on Election Day. He described Arizona as the “wild, wild West” — an environment that could potentially prompt acts of political violence.

“There’s a lot of guns. Then you have factions that would be described as fringe factions who feel as though if it’s not their way, then it’s the wrong way who are now emboldened to act out against it or to question institutions,” he said. “I have meetings every day with my team where we have a comprehensive, robust and highly committed plan … just to ensure that we get through this election.”

In Georgia, a key battleground state, officials have set up a poll worker response team — a group of people dedicated to looking into reports about incidents that interrupt the midterms.

“My big concern is not some organized conspiracy of people trying to do this. My big concern is some random lone wolf who is not right in the head, who was energized by all this misinformation and disinformation – they can do something with nobody knowing about it beforehand,” said Gabriel Sterling, chief operating officer at the Georgia secretary of state’s office.

Sterling testified in front of the January 6 congressional committee in June about then President Donald Trump and his allies’ attempts to pressure local officials as they tried to overturn the 2020 presidential election. He is not currently aware of any credible, active threat to the elections in Georgia, he said.

Officials in Michigan are also taking new steps to secure polling sites amid ongoing worries about violence linked to the midterms. The FBI this week arrested two alleged members of the Boogaloo Boys, a far-right anti-government group. One of them, Timothy Teagan, appeared in federal court in Detroit this week on charges of being a drug user in possession of firearms and ammunition. Teagan told documentarian Ford Fischer that federal agents asked him about “any violent plans or any violent tendencies that could come forth about the election.”

“Election officials and law enforcement are more prepared than ever before, to immediately address any attempt to interfere or disrupt the elections process or intimidate voters,” Michigan Secretary of State Jocelyn Benson told reporters in a briefing Thursday.

Michigan Attorney General Dana Nessell told POLITICO in an interview she’s been working with state and federal law enforcement to identify potential threats in the state.

“Some of the things happening in other areas are not happening here,” she said, referring to armed vigilantes at ballot boxes. “I absolutely believe that constitutes voter intimidation. We have very clear laws on voter intimidation on the books. We’ve taken every measure conceivable to make sure voters would have a normal election day.”

Heidi Przybyla contributed to this report.