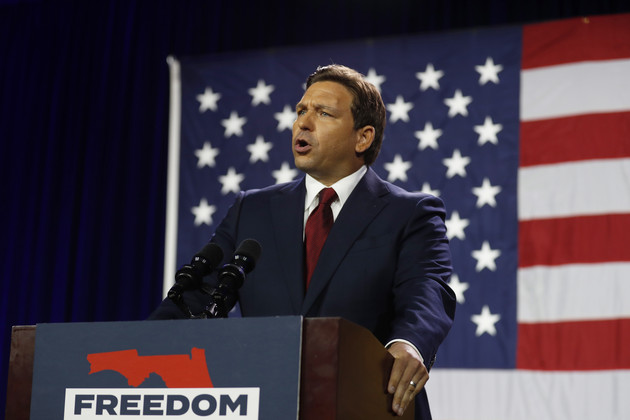 TALLAHASSEE, Fla. — A federal judge on Thursday halted a key piece of the “Stop-WOKE” Act touted by Republican Gov. Ron DeSantis, blocking state officials from enforcing what he called a “positively dystopian” policy restricting how lessons on race and gender can be taught in colleges and universities.

The 138-page order from Chief U.S. District Judge Mark Walker is being heralded as a major win for campus free speech by the groups who challenged the state.

The temporary injunction granted by Walker over the anti-woke law has significant implications for policies in Florida, including a pending university tenure review rule that requires professors to abide by it.

“’It was a bright cold day in April, and the clocks were striking thirteen,’ and the powers in charge of Florida’s public university system have declared the State has unfettered authority to muzzle its professors in the name of ‘freedom,’” Walker wrote, citing George Orwell’s novel “1984.” Walker was appointed to the federal bench by former President Barack Obama.

Florida’s Republican-led Legislature approved the “anti-woke” legislation, FL HB 7 (22R), or the Individual Freedom Act, earlier this year. The law, directly inspired by DeSantis, expands Florida’s anti-discrimination laws to prohibit schools and companies from leveling guilt or blame to students and employees based on race or sex, takes aim at lessons over issues like “white privilege” by creating new protections for students and workers, including that a person should not be instructed to “feel guilt, anguish, or any other form of psychological distress” due to their race, color, sex or national origin.

Bryan Griffin, a spokesperson for the governor, said the administration will appeal.

“We strongly disagree with Judge Walker’s preliminary injunction orders on the enforcement of the Stop W.O.K.E. Act and will continue to fight,” he said in a statement.

In his ruling Thursday, Walker determined those policies violate First Amendment free speech protections along with due-process rights in the 14th Amendment on college campuses.

“The law officially bans professors from expressing disfavored viewpoints in university classrooms while permitting unfettered expression of the opposite viewpoints,” wrote Walker. “Defendants argue that, under this Act, professors enjoy ‘academic freedom’ so long as they express only those viewpoints of which the State approves. This is positively dystopian.”

Thursday’s court ruling stems from two separate challenges to the Stop-WOKE Act that were heard together since they both fought how the law applies to higher education. Other legal challenges target K-12 schools and the workplace.

One of the lawsuits was filed by Foundation for Individual Rights and Expression, a college free speech group, on behalf of a University of South Florida professor, student, and student group. It alleged that the legislation pushed by DeSantis violates their freedom of speech, evidenced by how it could restrict lessons on critical topics such as Jackie Robinson, who broke professional baseball’s color barrier.

“Faculty members are hired to offer opinions from their academic expertise — not toe the party line,” Adam Steinbaugh, an attorney for FIRE, said in a statement. “Florida’s argument that faculty members have no First Amendment rights would have imperiled faculty members across the political spectrum.”

In the other lawsuit, the ACLU, ACLU of Florida and Legal Defense Fund sued the state over the “anti-woke” legislation on behalf of students and educators. They claim it is a “discriminatory classroom censorship law that severely restricts” how race and gender can be taught and talked about in schools.

“This is a huge victory for everyone who values academic freedom and recognizes the value of inclusive education,” Emerson Sykes, senior staff attorney with the ACLU Speech, Privacy, and Technology Project, said in a statement. “The First Amendment broadly protects our right to share information and ideas, and this includes educators’ and students’ right to learn, discuss, and debate systemic racism and sexism.”

The state university system Board of Governors, one of the central defendants in the case, declined to comment on the ruling. Officials with the Florida Department of Education did not immediately respond to a request for comment.

In a motion seeking to dismiss the lawsuit, attorneys for the state contended that the legislation prohibits teachers and professors from endorsing concepts spelled out in the anti-woke law, not “descriptive, historical discussion of racism in the past.”

“If, for example, a professor instructs students that in some period in history, individuals’ status as either privileged or oppressed was necessarily determined by race, that instruction does not violate the Act,” attorneys for the state wrote. “The professor has merely described historical factual circumstances, not personally endorsed the view that an individual’s status today is necessarily determined by race.”

Florida university leaders earlier this month granted initial approval to a new rule outlining reviews for tenured faculty members across the state, guidelines that require schools to probe university professors for any violations of the “Stop-WOKE” law, as well as unapproved absences, substantiated student complaints and other metrics.

Ether Staking Yields Jump Up to 25%; All-Time High Since Merge