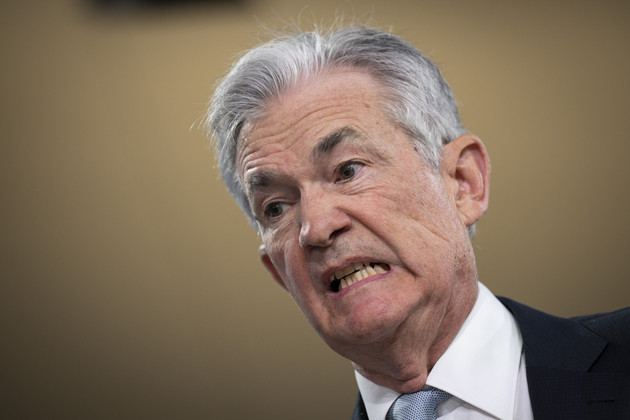 Chair of the U.S. Federal Reserve Jerome Powell attends a meeting of the IMFC at the IMF and World Bank Annual Meetings, Oct. 14, 2022 in Washington, D.C. | Drew Angerer/Getty Images

With the Fed poised to deploy another supersized rate hike on Wednesday, financial markets are showing signs of strain, the housing market is reeling from the highest mortgage rates in two decades and economists are cranking up their forecasts for a recession that could throw millions of people out of work.

Against that backdrop, fears are mounting that Powell, who has vowed to do whatever it takes to kill the price spikes, is moving at literally blinding speed — jacking up borrowing costs before the Fed is even able to see the effects of its previous rate hikes on either inflation or the economy.

Sen. Elizabeth Warren this week led nearly a dozen Democratic lawmakers in telling Powell he was raising rates at an “alarming pace.” In a letter, first reported by POLITICO, they accused him of a “disregard for the livelihoods of millions of working Americans.” It was the largest effort by Democrats to question Powell’s actions and was striking because the party has been reluctant to criticize the Fed.

The central bank is expected to raise rates by another three-quarters of a percentage point, the fourth such increase in a row. The move, which will come less than a week before the midterm elections, is a harbinger of economic pain to come that will shape the second half of Joe Biden’s presidential term. Amid raging inflation, lawmakers are likely to shy away from any big-spending relief plans even if the U.S. tips into recession, as most economists expect, heightening the misery for many Americans.

“In the interest of not completely wrecking the economy, it makes sense to slow down,” said Roberto Perli, head of global policy at investment firm Piper Sandler and a former senior staff member at the Fed.

While the Fed is an independent agency set up to be insulated from political pressure, the criticism matters because the central bank’s effectiveness rests on its credibility. Powell has worked hard to maintain good relations with Congress, meeting hundreds of times with lawmakers on both sides of the aisle since he became chair. He still enjoys strong support among GOP lawmakers and many Democrats.

The central bank’s critics may yet get their way. Policymakers such as San Francisco Fed President Mary Daly have made clear that smaller increases will be considered at the next meeting in December. But there’s no sign that surging prices are letting up, which means the central bank would have to strike a delicate balance: It’ll have to convince investors that going slower doesn’t mean it’s close to abandoning the fight against elevated prices. If that message fails, stocks and bonds could rally, undermining the Fed’s efforts to rein in growth and spending, and therefore inflation. And that could force policymakers to eventually raise borrowing costs even higher.

“The market can be its own worst enemy here,” said Krishna Guha, vice chairman at Evercore ISI.

Indeed, stocks rose steadily after an Oct. 21 Wall Street Journal article said officials were set to debate whether to pursue a smaller rate increase in December. Markets read that as a signal that the Fed was ready to slow down.

In the meantime, investors who finance the U.S. government’s debt have nervously watched as the Fed ratchets up rates, a dynamic that’s leading many firms to sit on the sidelines rather than buy Treasury securities because they don’t know when the central bank might stop. (If they buy U.S. debt at current rates, those assets will be worth less if rates go up again). That has led to larger swings in rates and choppier trading conditions in the world’s most important debt market.

John Fagan, co-founder of Markets Policy Partners who led the Treasury Department’s markets room from 2014 to 2018, said the Fed’s rapid moves have made the government debt market more fragile and vulnerable to shocks. He pointed to signs that the worst of inflation might be over, with supply chain issues easing and demand cooling for goods and services.

“There’s a lot of head-scratching as to why the Fed can’t seem to get out of fifth gear,” Fagan said. “There are lots of warning lights on the dashboard here. Meanwhile, the inflation warning light has gone from red to amber.”

“Our pitch has been for more nuance, more risk management,” he said, “so they can achieve their objective without overshooting.”

Some lawmakers have gone further. Sen. John Hickenlooper (D-Colo.) last week called on the Fed to pause its rate hike campaign entirely until it has a fuller picture of how much damage it has already done to the economy. That followed a letter by Senator Sherrod Brown, chair of the Banking Committee, which oversees the central bank, reminding Powell of his obligation to workers.

The Warren-led letter called the Fed’s aggressive fight against inflation “particularly troubling given the limits of interest rate hikes in addressing key drivers of today’s inflation, including lingering supply chain snarls, corporate price gouging, and the war in Ukraine.” Those are supply-side issues, while the Fed is best positioned to limit demand, such as business and consumer spending.

The Fed’s defenders say inflation is the biggest threat facing Americans, especially low-income workers, because everyone is affected by it. Powell has argued that bringing down surging prices will ultimately benefit workers.

“Without price stability, we will not achieve a sustained period of strong labor market conditions that benefit all,” he told reporters after the last rate increase.

The Fed is also afraid of repeating the mistakes of the 1970s when it backed off interest rate hikes too quickly, giving inflation time to become further entrenched in the minds of American businesses and consumers.

“We are committed to avoiding pulling back prematurely,” Fed Vice Chair Lael Brainard said in a recent speech, even as she acknowledged that it would take time for the full effects of the central bank’s actions to be seen.

For now, Fed officials have given no indication that they’re worried about a more serious breakdown in markets and have been weighing the extent to which investors are concerned simply because they’re losing money as bonds have plunged.

“Trading volumes are large. Traders are not having difficulty executing trades,” Treasury Secretary Janet Yellen said last week at a conference hosted by the Securities Industry and Financial Markets Association. “And so while you do see some signs of higher costs and a little bit less liquidity, we do not have a problem at this point.”

Still, Fed watchers are warning that something unexpected might break.

“It’s almost like they’re driving 75 down the highway and don’t know which way the road turns,” said Mark Cabana, head of U.S. Rates Strategy at Bank of America Global Research. “All they know is that they’re late.”

Bitcoin and Ether Steady Ahead of Fed Decision