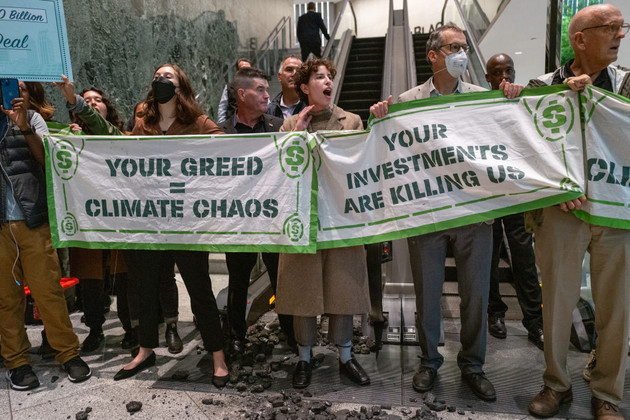 Climate activists block an escalator and throw coal on the ground at the New York headquarters of the financial investment firm BlackRock on Oct. 26, 2022, in New York City. | Spencer Platt/Getty Images

The country’s largest financial firms are bracing for a fresh wave of attacks on their sustainable investing efforts after the midterm elections — especially if Republicans take control of one or both houses of Congress.

The biggest push to discourage banks and asset managers from considering environmental, social and governance factors in making financial decisions — and the biggest headache for Wall Street — will continue to come from GOP state officials who have been cutting business ties with firms they say are discriminating against fossil fuel companies in service to a “woke” agenda.

Republicans are planning to build on the momentum they’ve established in states like Texas, Louisiana and West Virginia, where officials have pulled millions of dollars out of BlackRock Inc. and other financial firms. Financial officer candidates in Arizona, Florida, Illinois, Minnesota and Kansas have taken positions on ESG that have polarized races that seldom see political drama.

“This is going to escalate,” said West Virginia Treasurer Riley Moore, a Republican leading a coalition of 15 state treasurers working to punish financial firms they say are boycotting fossil fuels. “We are going full throttle once we get into 2023. We are going to see a lot more movement on this at the state level. You’re really going to start to reach critical mass as it relates to assets under management and capital that can be leveraged against the ESG movement.”

BlackRock and other big financial firms have long faced attacks from environmental activists over their refusal to divest from oil and gas companies, but they have been caught off guard by the wave of hostility from a political party that has long been viewed as an ally. And the fact that the attacks are coming even as they continue to be major supporters of the fossil fuel industry suggests that the fight is more about politics than money.

In Congress, House Republicans will focus on ESG if the party wins a majority, said Rep. Andy Barr of Kentucky, who is a member of the House Financial Services Committee and the Republican Study Committee. That would mean more aggressive oversight of the SEC’s proposed climate disclosure rule and the emphasis on climate risk at the Federal Reserve and other bank regulators.

“BlackRock and State Street and Vanguard and Invesco and Fidelity — these are great companies,” Barr said in an interview. “All we want is for them to live up to their history of being great American companies and achieving retirement security for Americans and stop this nonsense of politicizing capital allocation through ESG.”

The asset management firms — which have a fiduciary duty to seek the best returns for their clients — say they’re responding to investor demand for information on potential risks from climate change and other business threats.

Perhaps there’s no more famous example of the embrace of ESG than when BlackRock CEO Larry Fink declared in 2020 that “climate risk is investment risk.” But Republican financial officers are preparing to wield public coffers more broadly to discourage what they claim is political meddling.

Arizona Treasurer Kimberly Yee (R) pulled state funding from Ben & Jerry’s parent Unilever last year after the ice cream maker stopped doing business in Israel. She said she plans to carry out her office’s new investment policy against ESG if reelected, and the issue was the central focus of her debate with challenger Martín Quezada, a Democratic state senator.

“I’ll continue to fight against a political agenda that takes away the foundation of a free market,” Yee said in an interview. “We can’t play around with the taxpayer dollars. ESG policies are going down a dangerous path because they put politics over a financial scorecard.”

The anti-ESG campaign isn’t posing an existential threat for major financial firms. Louisiana’s withdrawal of $794 million from BlackRock, by far the most of any state, is but a blip on the bottom line of the world’s biggest asset manager, which had $8.5 trillion under management as of June 30. And many of the divestments don’t include public pension funds, the biggest chunk of capital overseen by states.

But that isn’t stopping the companies from fighting back. BlackRock has launched a nationwide ad campaign and created a webpage highlighting its approach to energy investments and climate, noting that it continues to invest more than $100 billion in Texas energy companies and $310 billion in energy firms worldwide.

“We are disturbed by the emerging trend of political initiatives that sacrifice pension plans’ access to high-quality investments — and thereby jeopardize pensioners’ financial returns,” BlackRock wrote in response to state attorneys general questioning the company’s commitment to achieving the best return for clients.

The contention that taxpayer and employee money is being put at risk is backed by a study done by University of Pennsylvania finance professor Daniel Garrett, who found that Texas entities will pay an additional $303 million to $532 million in interest on the $32 billion in borrowing done in the first eight months after the implementation of two laws that bar municipalities from contracting with banks that restrict funding to oil, gas or firearm companies.

“The sad part is that the citizens of red states will pay the price for the political theater in excessive interest rates for their bonds and high risk for their pension nest eggs,” said Andrew Behar, the CEO of As You Sow, a nonprofit shareholder advocacy group. “Any state treasurer who is running on anti-risk-assessment is declaring that they do not intend to do their job.”

Backers of the anti-ESG push, meanwhile, are looking to state legislatures to provide more authority for treasurers and comptrollers. Will Hild is executive director of Consumers Research, a nonprofit that backs a group of Republican state treasurers that oppose ESG financing. He said in an interview that he expects 12 to 20 states to consider legislation targeting financial firms’ ESG approaches in the next six to nine months.

Such bills could limit pension fund managers to only considering financial returns in their decision-making, similar to what Gov. Ron DeSantis (R) did in Florida. States also could take up “energy boycott” legislation, similar to laws in Texas, Kentucky, Oklahoma and West Virginia that require state agencies to divest from companies accused of boycotting fossil fuels.

The Heartland Institute, a nonprofit that denies mainstream climate science, names South Dakota, Mississippi and Nebraska as likely states for new anti-ESG action. The energy boycott bill, a draft model policy at the American Legislative Exchange Council, has already been introduced in recent legislative sessions in states including Idaho and Indiana.

West Virginia’s Moore said state and federal officials might consider whether companies are committing antitrust violations by collaborating on “net-zero” and ESG policies, pointing to Climate Action 100+, an investor-led initiative to tackle greenhouse gas emissions, as a prime example. They’ve already targeted banks’ involvement in the Net-Zero Banking Alliance, an industry-led, U.N.-backed group that is committed to reaching net-zero in their lending and investment portfolios by 2050.

The financial sector will weather the storm, but the impact on taxpayers remains to be seen.

“It is a disaster for our markets when politicians demand that financial institutions ignore whole classes of risk and opportunity because they don’t align with their ideology,” said Dave Wallack, executive director of the nonprofit For The Long Term, which advocates for treasurers to support their beneficiaries. “It is even worse still when they install blacklists and create fear in the market. These states are killing America’s golden goose — free markets — simply because the market doesn’t agree with their ideology.”

Zachary Warmbrodt contributed to this story.