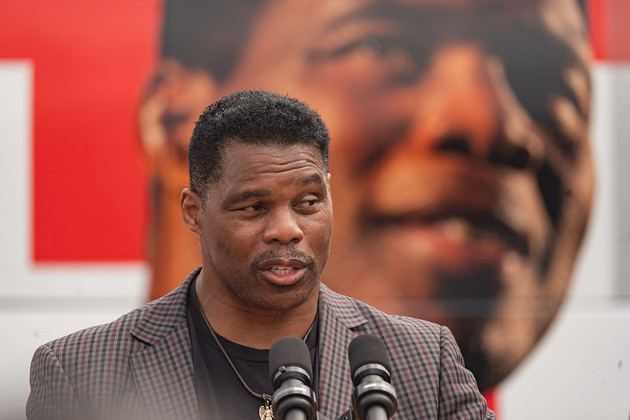 After news broke that Senate candidate Herschel Walker had allegedly paid for a girlfriend’s abortion in 2009, Republicans rallied around his imperiled candidacy.

Walker, the GOP nominee from Georgia, was already dogged by reports of past domestic violence — some of which he has acknowledged. Now he has put their top Senate pickup opportunity in peril with reports of behavior that directly violated his hard-line stance on abortion.

Republicans had another Todd Akin on their hands, some Republican strategists said to each other in text messages, referring to the Missouri Republican whose comments about “legitimate rape” in the 2012 general election cost the party a seat it was supposed to clinch. Others likened Walker to Roy Moore, the Alabama Republican who lost the deep-red state to a Democrat in 2017 after allegations of sexual misconduct surfaced.

But the GOP has little choice but to double down in support of Walker — a flawed candidate party operatives said still remains one of their last hopes of flipping control of the narrowly divided Senate chamber this year amid a shrinking map.

“When the Democrats are losing, as they are right now, they lie and cheat and smear their opponents,” Sen. Rick Scott, chair of the National Republican Senatorial Committee said Tuesday, echoing in his statement similar comments from other Republicans who dared to publicly weigh in on the allegations, though most incumbents remained silent on the matter while at home during Senate recess. The claims were reported Monday by the Daily Beast; POLITICO has not independently verified the Daily Beast’s reporting.

Walker has denied the charges.

“That’s what’s happening right now,” Scott continued. “They know they are on the verge of losing the Senate, and they know that Herschel Walker is winning, so they have cranked up the smear machine.”

Scott, putting on a brave face — similar to the president of Republicans’ top Senate super PAC — said the Senate committee remained fully committed to the Georgia race, where the NRSC announced last week it was splitting a new $8.5 million ad buy with the Walker campaign. Scott likened the situation to sexual assault and harassment allegations brought against Supreme Court Justices Brett Kavanaugh and Clarence Thomas, and suggested he believed Walker’s denial of the claim that he paid for the woman’s abortion 13 years ago.

While conceding that the latest allegation presented a public relations problem, in interviews with more than a dozen Republican strategists, operatives downplayed its likely effect. They suggested a wait-and-see approach and largely avoided conceding that Georgia’s first October surprise spelled an end to Walker’s chances.

A top Republican strategist working on Senate races said it still remains to be seen how much the new revelation will matter, noting the extensive media coverage about Walker’s alleged domestic violence and the television ads that have already attacked him over the issue.

“The reality is the Democrats have been running ads for two months saying Herschel tried to murder his ex-wife,” the strategist said of claims by Cindy Grossman that Walker held a gun to her head. “I don’t know that this moves the needle.”

Through a spokesperson, Senate Minority Leader Mitch McConnell — who has repeatedly expressed concern about GOP “candidate quality” this year — did not immediately respond to a request for comment.

Recent polling shows Walker and Democratic Sen. Raphael Warnock consistently trading the lead in a margin-of-error race. Walker was endorsed by former President Donald Trump, who defended his ally in a statement: “They are trying to destroy a man who has true greatness in his future, just as he had athletic greatness in his past. It’s very important for our Country and the Great State of Georgia that Herschel Walker wins this Election.”

To date this cycle, Republicans have spent $67 million on ads in Georgia, according to the ad-tracking firm AdImpact, a state they’ve seen as one of their top opportunities to flip a Senate seat. The GOP has another $34 million worth of ads booked through the election, putting Democrats on track to outspend them by more than $20 million.

Ralph Reed, founder and chair of the conservative evangelical Faith & Freedom Coalition, who has in recent months defended Walker and his commitment to his Christian faith, on Tuesday continued to do so, saying that “an anonymous allegation that is 13 years old is unlikely to resonate with Georgia voters.”

“Voters are far more likely to vote based on inflation, the economy, high gas prices, and the failure of Biden policies, which Raphael Warnock has supported 96 percent of the time,” Reed said, naming Walker’s Democratic opponent. He added that “Warnock is tied to Biden.”

“That will matter more than personal attacks against Herschel, which have not substantially changed the dynamics of this campaign.”

Kevin Bell, a volunteer with several local GOP groups in Georgia, said he doesn’t believe voter sentiment will change as a result of this week’s development.

“That’s just going to fuel the fire for those who didn’t want to vote for him in the first place,” said Bell, who plans to continue his door-to-door canvassing for Walker. “That’s all. And the ones who are on the fence, they may have to think about it a little bit more. But at the end of the day, those strong supporters are still going to vote for Herschel Walker. I guarantee.”

While expressing concerns for the NRSC’s lack of extensive state-level get-out-the-vote operations, Republicans are encouraged by Georgia Gov. Brian Kemp’s own voter mobilization efforts. Kemp, who is up for reelection and polling well ahead of Walker, has made a point to target GOP voters who sat out in 2020 and the state’s January 2021 Senate runoffs as a result of Trump’s disproven claims of a rigged election.

But Republicans expect Democrats to seize on the latest Walker scandal in a new barrage of ads, including highlighting Walker’s own 22-year-old son’s scathing criticism of him after the abortion news broke.

“What I would do if I was a Democrat is I would call him a fraud,” said a GOP consultant who has worked on Senate races. “Voters hate a lack of authenticity. He has built his entire post-NFL life on being a Christian and being a good person.”

GOP consultant Chris Mottola noted the polarization of voters in Georgia, a state that, unlike Nevada, Arizona and other top battlegrounds, does not have a large share of swing voters and independents.

“Given the October surprise nature of the attack, voters will be raising questions as to the validity — think of it as Hunter Biden’s laptop in utero,” Mottola said.

In a possible sign of how much media attention the news was receiving, the Georgia Republican Party’s website, which was working Tuesday morning, could no longer be accessed as of 10:30 a.m., leading to a “502 Bad Gateway” error. It included contact information for the party and county chairs.

Danielle Repass, press secretary for the Georgia Republican Party, said the site “is just experiencing a server error, it was not taken down intentionally” and the state GOP is “hoping to have it back up by the end of the day.”

She added that the Georgia Republican Party is “fully committed to ensuring Herschel Walker defeats Raphael Warnock this November.”

Senate Leadership Fund President Steven Law said Tuesday morning the super PAC is moving “full speed ahead in Georgia,” where it has $23 million in television and radio advertisements booked through Election Day.

The top Republican spending group, closely aligned with McConnell, has already spent $15.5 million on the race, according to AdImpact.

“This election is about the future of the country,” Law said in a statement. “Herschel Walker will make things better, Raphael Warnock is making it worse. Anything else is a distraction.”

And the top anti-abortion group Susan B. Anthony List, which endorsed Walker and has engaged in door-knocking on his behalf, also continues to stand by him.

Mallory Carroll, spokesperson for the group’s Women Speak Out super PAC, said Walker had “denied these allegations in the strongest possible terms.”

“To date, our Georgia field team has visited more than 310,000 homes across the state in support of pro-life candidates like Herschel and against the extremism of Sen. Warnock and Stacey Abrams, and we will continue through Election Day,” Carroll said.

One Republican strategist, however, predicted that the odds of a run off between Walker and Warnock increased amid the latest scrutiny. Another noted that Democrats have thrown tens of millions “worth of punches and attacks at Herschel so far, and Warnock still can’t get to 50 percent in any poll.”

Sen. John Cornyn (R-Texas), a former NRSC chair who also stands by his endorsement of Walker, called the “personal attacks — all too common in political campaigns,” a “diversion from the threats to Georgians’ economic, personal, and national security, which the Democratic majority has made worse, not better.”

Barring any dramatic swings in the polls, which Republicans aren’t expecting, the party will likely continue to pour resources into the state, rather than diverting money to other top battlegrounds.

“You’ve got to play in Georgia,” said the Republican strategist who suggested that Democrats should frame Walker as a fraud. “You have to in order to get to 51.”

Holly Otterbein and Brittany Gibson contributed to this report.

Spanking related to other forms of discipline, intimate partner violence