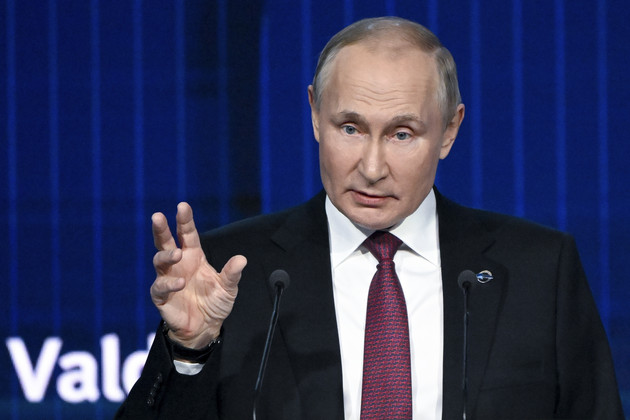 Russian President Vladimir Putin on Thursday denied having any intentions of using nuclear weapons in Ukraine but described the conflict there as part of alleged efforts by the West to secure its global domination, which he insisted are doomed to fail.

“We see no need for that,” Putin said. “There is no point in that, neither political, nor military.”

Putin, who sent his troops into Ukraine on Feb. 24, has cast Western support for Ukraine as part of broad efforts by Washington and its allies to enforce its will upon others through what they call a rules-based world order. He argued that the world has reached a turning point, when “the West is no longer able to dictate its will to the humankind but still tries to do it, and the majority of nations no longer want to tolerate it.”

The Russian leader claimed that the Western policies will foment more chaos, adding that “he who sows the wind will reap the whirlwind.”

Putin claimed that “humankind now faces a choice: accumulate a load of problems that will inevitably crush us all or try to find solutions that may not be ideal but working and could make the world more stable and secure.”

The Russian leader said Russia isn’t the enemy of the West but will continue to oppose the purported diktat of Western neo-liberal elites, accusing them of trying to subdue Russia.

“Their goal is to make Russia more vulnerable and turn it into an instrument for fulfilling their geopolitical tasks, they have failed to achieve it and they will never succeed,” Putin said.

Putin reaffirmed his long-held claim that Russians and Ukrainians are part of a single people and again denigrated Ukraine as an “artificial state,” which received historic Russian lands from Communist rulers during the Soviet times.

The Russian leader repeated Moscow’s unfounded claim that Ukraine was plotting to detonate a radioactive dirty bomb to blame Russia in a false flag attack, the allegations rejected by Ukraine and dismissed by its Western allies as “transparently false.”

Putin said he thinks “all the time” about the casualties Russia has suffered in the Ukraine conflict, but insisted that NATO’s refusal to rule out prospective Ukraine’s membership and Kyiv’s refusal to adhere to a peace deal for its separatist conflict in the country’s east has left Moscow no other choice.

He denied underestimating Ukraine’s ability to fight back and insisted that his “special military operation” has proceeded as planned.

Putin also acknowleged the challenges posed by Western sanctions, but argued that Russia has proven resilient to foreign pressure and has become more united.