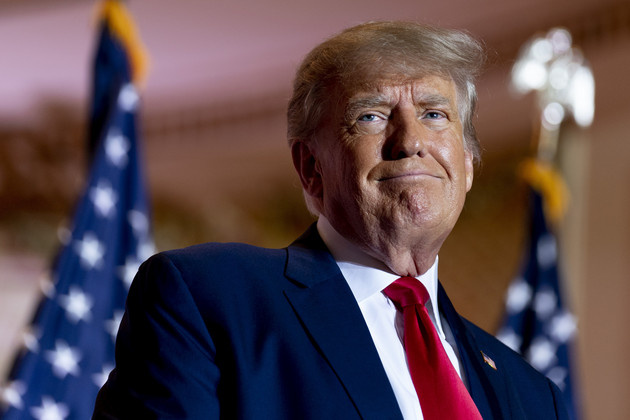 Former President Donald Trump announces he is running for president for the third time as he smiles while speaking at Mar-a-Lago in Palm Beach, Fla., Nov. 15, 2022. | Andrew Harnik/AP Photo

Investors on Tuesday agreed to give former President Donald Trump’s social media startup more time to close a deal with a partner company that would land the new venture on a Wall Street stock exchange and raise hundreds of millions of dollars.

There’s one problem: Federal regulators at the Securities and Exchange Commission may still have reason to block the deal.

“We’re in uncharted territory,” New York University law professor Michael Ohlrogge said. “There is credible reason to believe that they violated some securities laws in how they struck the deal. The question then is how the SEC responds.”

A move by the SEC to stop the deal would mark a major hit for what was supposed to be the beginning of a new era for Trump’s business empire — one designed to take on other tech giants such as Twitter with the advent of Truth Social. It would also provide fodder for opponents to attack Trump as he mounts a bid for the White House in 2024 and faces other government inquiries into the Trump Organization, while setting up the SEC as a new foe for the former president and his allies.

The shareholder vote to extend the deadline for the Trump Media and Digital World combination to September 2023 follows months of delays, as executives attempted to no avail to gain enough investor support for more time. But regulatory concerns about the deal popped up soon after it was announced.

Just months after the deal was struck, Digital World disclosed that the SEC was inquiring about trades in the company’s stock ahead of the deal announcement in October 2021. The agency has since expanded the investigation. In a June filing, Digital World disclosed that it and Trump Media had received SEC subpoenas for information and documents related to, among other things, communications among the companies’ executives and board members about the deal.

The SEC is looking at questions related to the rules for special purpose acquisition companies, such as Digital World. So-called SPACs are effectively skeleton corporate vehicles with no operations other than to go public and use those funds to acquire a private company that will eventually take over its public listing.

At issue is whether the executives at Digital World and Trump Media held substantive enough conversations about a deal before the SPAC went public that should have been disclosed to the public but were not, according to University of Georgia law Professor Usha Rodrigues.

“It would be hard for me to see the SEC concluding that there was no issue in that circumstance,” Rodrigues said. “Our securities laws are premised on accurate disclosure: That the public can rely on the truth of statements, at least of material statements. And I don’t think there’s anything more material for a SPAC investor than the SPAC’s target.”

William Wilkerson, a now-former Trump Media executive, filed a whistleblower claim with the SEC in August alleging that the two sides engaged in “substantive communications” about the deal beforehand, according to a copy of the report that was shared with POLITICO by his legal team. Wilkerson was fired by Trump Media after going public with his allegations.

Lawyers for Digital World have recently been making the case to the SEC that the talks were not “substantive,” according to the New York Times.

The SEC declined to comment on the state of the investigations. A spokesperson for Digital World did not respond to requests for comment.

In a statement, Trump Media blasted the SEC for what it called holding up the deal for “purely political reasons.”

“By refusing to either approve or reject the deal, and instead tossing the matter into a bureaucratic black hole of inaction, the SEC is violating its own charter and damaging the very retail investors they are sworn to protect,” the company said.

SPACs have come under mounting scrutiny in Washington since blowing up in popularity during the pandemic. The SEC proposed new rules for the market in March to try to address concerns about investors not receiving the same amount of information and protections in SPAC deals as they would in others — a move that managed to take even more air out after what had already been a brutal stretch for the SPAC market.

“The SEC has been extremely skeptical of many SPACs’ claims, both at the time of the initial offering and at the time of the merger,” said Ty Gellasch, a former official of the agency who now leads the investor advocacy group Healthy Markets Association. “What we’re seeing now is a race for many SPACs to close deals before they essentially have to give their money back.”

The concern, Macey said, is that if the SEC blocks the deal it could wind up doing more harm to the individual investors who piled into Digital World’s stock than did the executives who may have violated the securities laws. One alternative the regulator may pursue would be an enforcement action against the executives, rather than blocking the transaction itself, Macey said.

Either way, until the SEC does decide, the agency is bound to remain a target for Trump, who stands to see a sizable windfall in the deal if completed. The former president has been criticizing the regulator for months now on the campaign trail. In September, he posted on Truth Social that the SEC was “trying to hurt” Digital World. But Trump was ambivalent in that, if the deal doesn’t go through, there could be alternative sources of financing available.

“I’m really rich!” he posted on Truth Social at the time. “Private company anyone???”