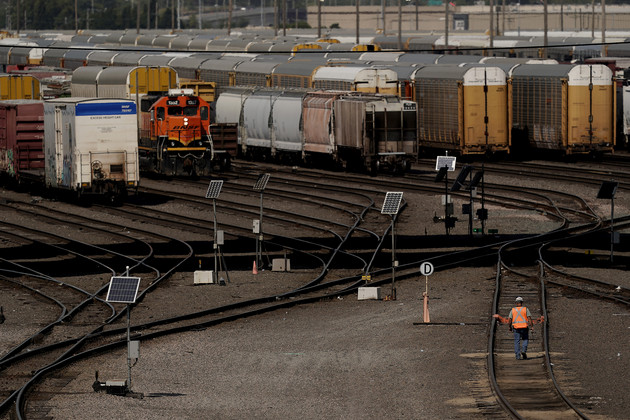 A strike could happen as soon as Nov. 19 unless 12 rail unions approve their contracts, or Congress steps into the fray. | Charlie Riedel/AP Photo

Yet another union voted down a proposed contract with the freight railroad industry Wednesday, again pushing the nation toward an economically crippling rail strike as soon as next month.

Wednesday’s vote by the Brotherhood of Railroad Signalmen makes it the second rail union to reject a compromise since Sept. 15, when eleventh-hour deal-making by the Biden administration averted the threat of an immediate work stoppage.

Despite that momentary political victory, a strike could still happen as soon as Nov. 19 unless 12 rail unions approve their contracts, or Congress steps into the fray — another looming dark cloud for the U.S. economy as voters head to the polls for the midterm elections.

The stakes could not be higher. The freight rail industry, which is responsible for moving some 40 percent of long-haul goods, is critical to the nation’s economy — including supplies needed for electricity and drinking water, not to mention commodities like food and gifts for the holiday shopping season. For that reason, Congress would face immense pressure to intervene if a strike appeared imminent.

Democrats have so far resisted calls from some GOP lawmakers and the railroad industry to force both sides to accept the recommendations of a emergency board appointed by President Joe Biden. That compromise would raise workers’ pay by 24 percent over five years but did not include paid sick leave, a major sticking point in the negotiations.

The Brotherhood of Railroad Signalmen initially said its “cooling-off” period — during which it may not strike — would end Nov. 19, like another union that previously rejected its contract. But the unique language of its agreement with the railroads makes it possible that the period will end Dec. 4.

“As the President has said for months, any shutdown would be completely unacceptable,” White House press secretary Karine Jean-Pierre said Wednesday. “It is the responsibility of the parties involved to resolve this issue. Any idea that kicking this to Congress will result in a quick or favorable outcome is deeply misguided. That is our view from here.”

Though any strike would take place after the midterm elections, even the possibility of such an economic calamity happening on Biden’s watch endangers Democrats’ credibility on handling the economy. Just weeks ago, when a compromise brokered by Labor Secretary Marty Walsh temporarily averted the strike threat, the White House projected confidence that the problem was solved.

“It’s not clear if the negotiators who were negotiating on [workers’] behalf knew where the red lines were” when it came to time off, said former Treasury Department official Christine McDaniel, now a senior research fellow at the Mercatus Center. “Why didn’t they bring it up during negotiation, especially when you have the Secretary of Labor — a member of the president’s Cabinet — involved in the negotiations? That’s really the time to make really clear what your red lines are.”

So far, six unions — representing about 20 percent of the 125,000 workers covered by the proposed contracts — have voted to ratify their deals. Two unions, representing around 25 percent of the workers, have now voted no. But just a single union voting to walk off the job could trigger a nationwide shutdown because of other workers’ reluctance to cross a picket line.

Railroads and their unions have tried for three years to negotiate a new contract, eventually forcing Biden to appoint a board to work out a solution. That solution is part of the mix of contract negotiations, though many of the involved unions are negotiating for more. A Sept. 16 shutdown threat was averted when three unions that hadn’t yet reached a tentative agreement with the railroads agreed to one in the early morning hours of Sept. 15.

None of the remaining votes scheduled through late November are foregone conclusions, but rank-and-file workers have expressed widespread dissatisfaction over their working conditions, including longer times away from home, extended on-call schedules that could order them back to work on their days off and insufficient paid sick leave. They say the Biden-backed board’s proposal, as well as the contracts put forth by the carriers, don’t do enough to address their concerns.

“That’s tough for members to take when they don’t want to give us an extra day or two of sick leave,” Behrens said.

Union Pacific spokesperson Kristen South said it’s “untrue” that rail employees do not get time off work, adding that “no Union Pacific employee has been fired because of missing a single day of work, and we actively assist employees who encounter hardships that require time off.” She said the railroad is working with union leadership to pilot “a work/rest program that we hope to learn from and implement more broadly.”

Another hang-up for members of the Brotherhood of Railroad Signalmen: cost-of-living adjustments for workers who live in expensive states like California.

“Our guys are hired by the railroads to make sure no one dies … at a crossing or dies on the tracks from train mishaps,” said Doug Dawley, vice general chairman for the union’s second-largest affiliate, Burlington Northern General Committee 12. “That’s how important it is, what we do. And yet our guys make less money than food servers do in some parts of the country.”

The independent, cross-union group Railroad Workers United is organizing workers to vote down the tentative agreements.

“It’s very telling that these workers are willing to vote no to this contract,” said Ross Grooters, a member of both Railroad Workers United and the 25,000-member Brotherhood of Locomotive Engineers and Trainmen. He said the two unions that have voted no so far “are not subject to the worst provisions [of the tentative agreements] … so it’s very telling that people that don’t even feel the worst effects of this contract are willing to vote ‘no.’ It’s a strong signal.”

The freight railroads say their workers get three to five weeks of paid vacation, partial pay in case of a short-term disability and the freedom to “mark off” — temporarily remove themselves from the list of available employees, at any time and for any reason. They also say federal law limits the number of hours rail employees can work and guarantees a certain amount of rest time.

The Biden board’s “recommendations remain the framework for an agreement,” the coalition that represents railroads in bargaining, National Carriers’ Conference Committee, said in a statement last week after the Brotherhood of Maintenance of Way Employees Division issued fresh demands. “Now is not the time to introduce new demands that rekindle the prospect of a railroad strike.”

The timing of the union votes works in favor of the prospect of lawmakers again extending the cooling-off period to allow the talks to continue without the threat of a strike. That’s because Congress will have returned from its post-election recess only five days before the current cooling-off period expires.

“The alternative is to let Congress write our agreement, and I’m not really comfortable with letting them do that,” Behren said. “We’ve got labor-friendly congressmen and senators, but how adept are they at writing a labor agreement, you know?”

“None of us want to put the economy at risk,” he added. “But … it comes to a point where you’ve gotten all you can get this round.”

The workers themselves acknowledge that the option of congressional intervention has left the possibility of a real strike all but out of reach.

“A strike isn’t really likely,” Dawley said. “It would be an opportunity for the employees to show they’re upset — but it wouldn’t be anything where we could do it for a week or 10 days, because it wouldn’t be allowed. We don’t get to control that.”

“The railroads know it, and we know it, too,” he added.

The Brotherhood of Railroad Signalmen’s national leaders did not respond to a request for comment.

The International Association of Machinists and Aerospace Workers voted overwhelmingly to go on strike in September, when it became the first union whose members rejected the contract their leaders had agreed to. Instead of striking, the union leadership extended the cooling-off period to allow more time to negotiate — a decision that led at least one local leader to slam leadership for “undermin[ing] the collective voices of all Class 1 Railroad workers.”

Josh Hartford, an official of the machinists and aerospace union, responded that the move had been difficult, but strategic: “Historically, Congress has gotten involved any time there has been a real threat of a rail shut down,” he wrote to the disgruntled official. “When Congress gets involved, we lose.”

US GDP Expands 2.6% in Q3, Faster Than Expected; Bitcoin Steady