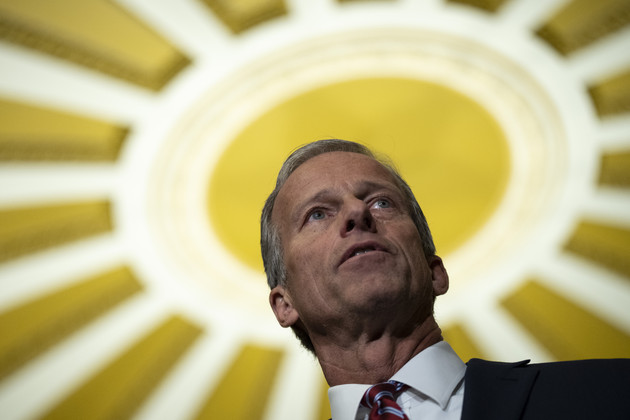 Senate Republicans are slowly but surely distancing themselves from Donald Trump after a call to terminate the Constitution and a meeting with antisemites — though there’s no sign any will start actively opposing his 2024 campaign.

The former president’s campaign launch is landing with a thud among Republican leaders, many of whom began losing interest after his loss to Joe Biden and are now openly pining for a crowded primary field to take on Trump. That hope for intraparty competition is a flashback to the opening days of the 2016 election, except this time Trump has baggage ranging from stoking an insurrection to a sitdown with Ye and white nationalist Nick Fuentes to his latest call to illegally unwind his 2020 defeat.

As polls show Gov. Ron DeSantis (R-Fla.) competitive with Trump and many other Republicans eye a run against him, some in the GOP think Trump might even end up pulling the plug on his nascent campaign.

“I just think, in the end, he will not end up running because [of] the polling,” said retiring Sen. Rob Portman (R-Ohio). “The trend line is not positive.”

Trump on Saturday falsely cited “massive fraud” in his 2020 loss before calling for a “termination of all rules, regulations, and articles, even those found in the Constitution” in order to reinstate him as president or hold a new election.
That comment, Portman said, “makes no sense.”

Many election officials, including Trump’s own former attorney general, have affirmed that no voter fraud occurred on a scale significant enough to affect Biden’s victory over Trump. And spending yet another year litigating 2020 is too much for some party leaders.

“I’m at a loss for words. We need to move on,” Sen. John Cornyn (R-Texas), an adviser to McConnell, said of the constitutional-suspension posts from the former president. Cornyn added that the prospect of Trump winning the nomination is “increasingly less likely, given statements like that.”

While few Republicans spoke out publicly before returning to Washington on Monday, Senate Minority Whip John Thune (R-S.D.) said “of course I disagree with that” when asked about Trump’s comments. The No. 2 Senate Republican would not say whether he’d support Trump if the former president wins the GOP nomination in 2024 and said he’s “just not going to go there at this point — that’s a long way off.”

But Thune did predict Trump’s remarks would fuel the ambitions of Republicans who’d want to take on the former president in a 2024 primary: “It’s just one of those intuitively obvious things, whether a candidate for office has sort of a bedrock principle, ‘are you going to support the Constitution?’” Thune said. “For him, it’s not all that unusual. But it will be the grist and plenty of fodder for those that are looking to get into that race.”

Trump could face competition from DeSantis and a handful of Republican senators for the nomination. Rather than actively oppose his candidacy, many in the GOP are betting he will fall flat on his own this time around after twice winning the Republican nomination.

Some said the party’s lackluster midterm results speak for themselves.

“The facts of the election in 2022 are just indisputable. The ultra, pro-Trump, handpicked by Trump, based on loyalty to Trump? Those candidates wildly underperformed,” said retiring Sen. Pat Toomey (R-Pa.), who voted to convict the former president in his second impeachment trial. “It’s pretty clear that he’s become a toxic force and that’s going to diminish his influence a lot.”

His suspend-the-Constitution posts on his Truth Social platform mark the second time in two weeks that Trump has prompted criticism from within the GOP, after he dined last month with antisemitic rapper Ye, better known as Kanye West, and white nationalist Nick Fuentes. That sitdown led Senate Minority Leader Mitch McConnell (R-Ky.) to predict that anyone holding meetings with people who use their profiles to disseminate bigotry “are highly unlikely to ever be elected president of the United States.”

The meeting with Ye and Fuentes, Trump’s postings about the Constitution and a hangover from his role nominating several losing candidates are all animating Republicans to reconsider Trump’s viability. And some of the party’s senators have been there all along.

“I’d like Republicans to win elections again, unlike the way this guy has made sure my party could snatch defeat from the jaws of victory in 2018 and in 2020 and again in 2022,” said Sen. Ben Sasse (R-Neb.), who is leaving Congress next month to become president of the University of Florida.

Sasse voted to convict Trump in his 2021 impeachment trial and was a frequent critic of the former president’s. He says now “people in my party have to decide: Do they want to keep giving oxygen to somebody who is trying to sell tickets to his own proprietary circus, or do they want to be a constitutional party that has a clear agenda.”

Many of those who will serve beyond January were more reserved but still clearly broke with Trump. Sen. Chuck Grassley (R-Iowa) said the substance of Trump’s proposal is “pretty simple, it’s unconstitutional.” Sen. Shelley Moore Capito (R-W.Va.), another McConnell adviser, dismissed Trump’s comments as “ridiculous” and said they “sounded like a little crazy talk to me.” And retiring Sen. Roy Blunt (R-Mo.) said there’s “no emergency clause not to follow the Constitution.”

McConnell declined to respond to questions about Trump’s postings on a constitutional suspension, saying he’d address it Tuesday at his weekly press conference.

Trump tried to walk back his willingness to suspend the Constitution on Monday, posting that “the Fake News is actually trying to convince the American People that I said I wanted to ‘terminate’ the Constitution.” Yet he followed that comment with another suggestion that in fact he would be open to a suspension, suggesting “no time limit” for holding a new presidential election.

And while no one would defend Trump’s idea of terminating the Constitution, several saw value in his rants about Twitter’s decision to suppress reporting about Hunter Biden’s personal computer files during the 2020 election. Sen. Lindsey Graham (R-S.C.) said what “Trump said was wrong, but what happened at Twitter was wrong.”

“One of the reasons that the Twitter story is so significant is because it shows a direct threat to the First Amendment,” said Sen. Josh Hawley (R-Mo.). “The First Amendment, or any part of the Constitution, should never be suspended.”

But only a few focused on Twitter’s missteps, in contrast to Trump’s comments. Former Vice President Mike Pence responded to Trump, albeit indirectly, by saying that “everyone that aspires to serve or serve again should make it clear that we will support and defend the Constitution of the United States.”

Sen. Lisa Murkowski (R-Alaska), who voted to convict Trump in his impeachment trial and just won reelection, said on Sunday night “that suggesting the termination of the Constitution is not only a betrayal of our oath of office, it’s an affront to our Republic.” And Sen. Mike Rounds (R-S.D.) said that “anyone who desires to lead our country must commit to protecting the Constitution.”

Could new cancer drugs come from potatoes and tomatoes?