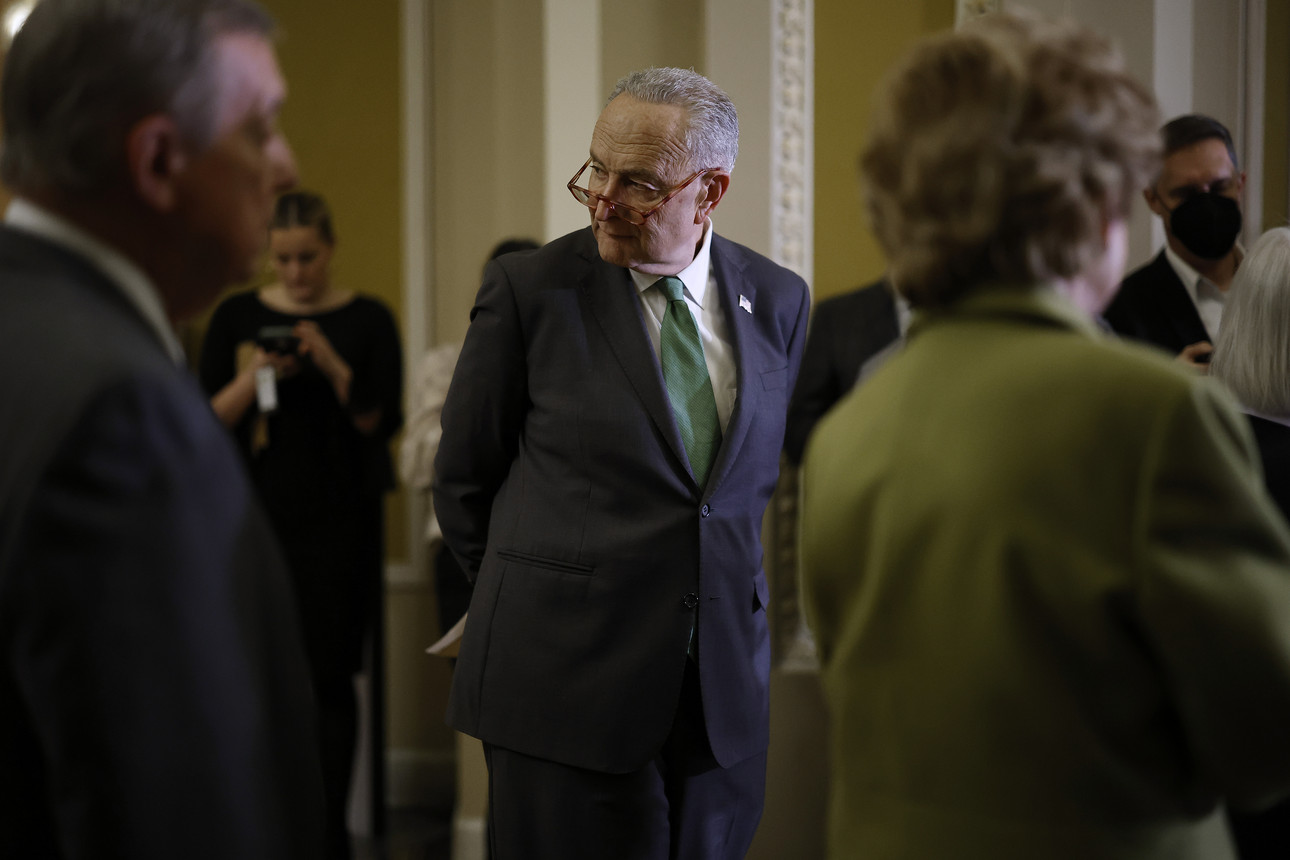 “Most of the provisions in the bill were well known weeks and weeks and weeks in advance,” Senate Majority Leader Chuck Schumer said of the $1.7 trillion year-end spending package Tuesday afternoon. | Chip Somodevilla/Getty Images

What do GOP fiscal hawks hate more, a mammoth spending bill or the threat of canceling their holiday flights because of a massive storm? The Senate might soon find out.

Congress is hustling to pass a $1.7 trillion year-end spending package before leaving Washington for the year, with government funding set to run out Friday. The Senate took its first procedural vote Tuesday after the sprawling bill’s text was released in the pre-dawn hours — but to meet its end-of-week deadline, much less finish work days early, the chamber will need buy-in from all 100 senators.

That includes a passel of conservatives, including one senator who has slammed the fast-paced spending debate as “legislative barbarism” and “extortion.” Republican leaders are hoping the proverbial scent of jet fumes calling senators home, combined with the threat of a snowstorm that will blanket half the country, will help deliver a holiday miracle: final passage of the bill as soon as Wednesday.

A Wednesday vote in the Senate would align with the House’s plan to return that evening to start pushing the so-called omnibus across the finish line. And some senior aides think that whenever the spending package does make it to the House, the chamber could pull a late-night session, sending members home as quickly as possible to avoid the wintry weather.

“I think the storm may put a little bit of extra encouragement to try to expedite things,” Minority Whip John Thune (R-S.D.) said.

Minority Leader Mitch McConnell (R-Ky.) echoed that timeline as he departed the Capitol on Tuesday evening, saying that they “hope to finish tomorrow.”

Meanwhile, Majority Leader Chuck Schumer also cited the impending snowstorm on the floor as he urged the chamber to pass the package “much sooner” than Friday: “I hope no senator stands in the way of us finishing our work.”

Yet if they are going to make the end-of-the-week deadline, Democrats are likely to have to cut a deal with a handful of conservative senators who are holding a rolling, public Festivus to roast the spending bill.

GOP Sen. Ron Johnson of Wisconsin is expected to get a vote on his proposal to strip out earmarks, or money set aside for lawmakers’ hometown projects — which is set to fall short. Sen. Mike Lee (R-Utah) wants a vote to replace the bill with a short-term funding patch into early next year. And Sen. Rand Paul (R-Ky.) is planning an arcane maneuver that would sink the bill if successful, as well as seeking to force a separate vote on changing Congress’ budget rules moving forward.

Paul, Lee and Johnson joined with Sens. Rick Scott of Florida and Mike Braun of Indiana on Tuesday to kvetch about the bill and the largely closed-door, tight-knit process that led to Congress’ trying to pass a bill that’s thousands of pages long just days after it was publicly released. The five senators are part of the Senate’s so-called Breakfast Club, a gang of conservatives looking to grow their influence in the next Congress.

“These people, I would not put [them] in charge of a Minute Mart and three gas stations, much less a $6 trillion economy,” Paul said. “They know the deadlines, they fail every year. They bring it to Christmas and then they blame conservatives.”

Lee read off a list of buildings that lawmakers are preparing to name after Speaker Nancy Pelosi, as well as retiring Sens. Patrick Leahy (D-Vt.) and Richard Shelby (R-Ala.), quipping: “I guess there are still a few things in Alabama that have yet to be named after Richard Shelby.”

Each of those frustrated Senate conservatives would need to agree to speed up the spending bill in order to finish by the Friday deadline, much less Wednesday. Paul declined to say whether he would, while Lee lamented that it was too early to ask. But the Utah Republican vowed there wouldn’t be a shutdown early Saturday, and Braun, in a brief interview, said that he thought the Senate could wrap its work Wednesday.

“The ones who would be in that usual suspect gang, I think, if they get their amendments they agree to a time agreement,” Braun said, adding that he’s not “interested in delaying things at all.”

The effort to defuse potential conservative landmines comes after weeks of closed-door negotiations between top appropriators. And even that was far from simple, after a last-minute spat between Virginia and Maryland Democrats over the location of the new FBI headquarters, which was first reported by POLITICO.

The package provides the military with $858 billion for this fiscal year, and funds domestic programs at more than $772 billion, including a $119 billion or 22 percent hike for veterans’ medical care. The package also includes about $45 billion for Ukraine and nearly $40 billion in disaster aid, in addition to legislation that would reform the 1887 Electoral Count Act, which former President Donald Trump sought to exploit to overturn the 2020 election results.

Schumer pushed back on the conservative complaint that the mammoth bill was negotiated in private and released at the last minute, arguing that the bigger package “has been carefully worked on by the Appropriations Committee for a very long time.”

Senate Republican leadership is stopping short of projecting how many of their members will ultimately vote for the bill, which will need 10 GOP votes to pass. And across the Capitol, Republicans are expected to oppose it en masse after pushing for a short-term punt into early next year; House GOP leadership formally whipped against the spending bill on Tuesday.

In addition, a baker’s dozen of House conservatives sent a letter this week to Senate Republicans warning that they would actively oppose any legislation next year championed by GOP senators who vote for the spending bill. House Minority Leader Kevin McCarthy, who is still trying to lock down the votes he needs to become speaker next month, threw his weight behind that effort on Tuesday — underscoring the reality that some of his loudest critics were signatories to the intra-party threat.

And even Republicans who are going to vote for the spending package lamented the process that produced it as an emblem of Washington dysfunction.

Sen. John Cornyn (R-Texas), an ally of Minority Leader Mitch McConnell, described himself as voting for the bill “reluctantly.”

“But I don’t think anybody should be celebrating this flawed, broken process,” he said.