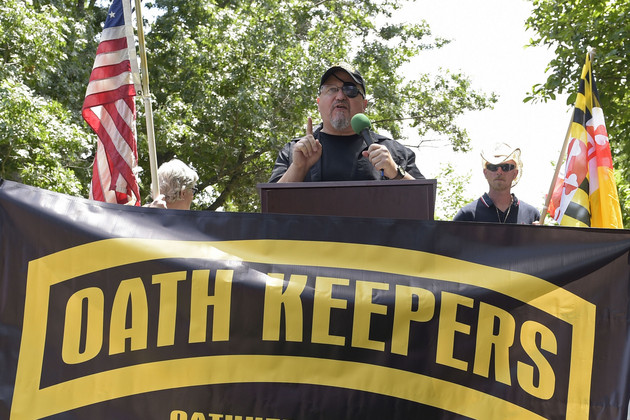 Prosecutors revealed messages between Oath Keepers founder Stewart Rhodes and an attorney who Rhodes has claimed served as the group’s general counsel — but who prosecutors say did not act in that capacity — engaging in sexually explicit banter. | Susan Walsh/AP Photo

Prosecutors on Monday entered the sex, guns and road trip portion of their sprawling seditious conspiracy case against five leaders of the far-right Oath Keepers, presenting a new pile of vivid, granular and, at times, R-rated evidence to the jury.

Justice Department attorneys, who have charged Oath Keepers founder Stewart Rhodes and several allies with plotting to forcibly prevent Joe Biden from taking office, reconstructed the group’s movements in the days before Jan. 6, 2021, as members from across the country drove to Washington, D.C., with a massive arsenal of firearms in tow.

At the same time, Rhodes was helping amass his own contributions to the Oath Keepers weapons cache, which would later be stashed at an Arlington, Va., Comfort Inn, strategically located to ensure the weapons could be ferried downtown at a moment’s notice. Prosecutors showed messages in which Rhodes negotiated to purchase firearms and other equipment ahead of Jan 6 and drew down bank accounts to the tune of more than $100,000 along the way.

In the third week of the government’s case against Rhodes and Oath Keepers Kelly Meggs, Jessica Watkins, Thomas Caldwell and Kenneth Harrelson, prosecutors are attempting to fill in their extensive evidence about the group’s cache of arms and how it methodically planned to bring them to D.C. ahead of Congress’ Jan. 6 session to certify the 2020 election results.

Dozens of Oath Keepers came to Washington that day, and more than 20, including Rhodes, were spotted on the Capitol grounds as a pro-Donald Trump mob stormed the building. Although Rhodes didn’t enter the building himself, two groups of his allies — including Meggs, Watkins and Harrelson, surged inside with the crowd while clad in military-style garb. Back at the Comfort Inn, Oath Keeper Ed Vallejo — who is also charged with seditious conspiracy and will be tried in November — stood ready for orders to transport the weapons into Washington, either by van or by boat.

Among the new details: Surveillance footage taken from the Comfort Inn showing Watkins, Caldwell and another Oath Keeper, Donovan Crowl, saluting each other hours after returning from the mob riot at the Capitol. The footage showed members of the Oath Keepers hauling large carts of cases that prosecutors say contained weapons into their hotel rooms.

Prosecutors also showed the jury a new series of text messages sent among leaders of the group as they traveled to Washington in the days before Jan. 6. It showed them carefully coordinating their locations and plans as they converged on Washington, with some stopping at prearranged outposts outside Washington on the way.

Amid that travel, prosecutors revealed messages between Rhodes and Kellye SoRelle, an attorney who Rhodes has claimed served as the group’s general counsel — but who prosecutors say did not act in that capacity — engaging in sexually explicit banter.

“Speaking of fucking … if you need some come over,” Rhodes wrote to SoRelle on Jan. 2, 2021. SoRelle replied that she couldn’t but after a lengthier exchange said, “You’re too good at what you do. Whole bad boy thing. I am a damn moth to a [flame emoji]. I really am replaying my teenage years.”

The messages underscore the personal relationship between Rhodes and SoRelle even as some of the defendants have sought to keep some of her messages excluded by claiming attorney-client privilege.

Prosecutors also sought to continue undercutting a key defense of the Oath Keepers — that they were in Washington only to serve as security details for VIPs attending pro-Trump rallies, not as part of any plan to disrupt the peaceful transfer of power.

DOJ attorneys played several audio segments of a podcast joined by two Arizona Oath Keepers, Vallejo and Todd Kandaris, on the morning of Jan. 6. The pair described their presence in Washington as part of an effort to forcibly prevent Biden from taking office.

“We are the final check and balance to this process,” Kandaris said. “Is there a ‘shot heard round the world’ moment? The possibility definitely exists.”

Kandaris has not been charged.