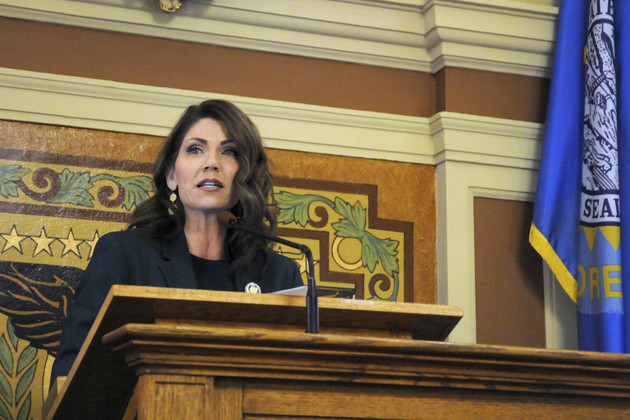 South Dakota Gov. Kristi Noem has said she would accept Medicaid expansion if voters approve the measure, even while she remains opposed. | James Nord/AP Photo

South Dakota is poised to expand its state Medicaid program to more than 40,000 people in November, the culmination of a years-long strategy from progressives to broaden Obamacare’s reach in deeply red states.

If voters approve the referendum, South Dakota will be the seventh Republican-controlled state in the past five years to expand the low-income insurance program at the ballot box — and likely the last for some time to come.

There are 11 other states that have not expanded Medicaid, but only three — Florida, Mississippi and Wyoming — allow voters to collect signatures for a ballot measure, and none appear likely to take up the effort in the near term.

For Democrats who hoped Medicaid expansion would be a step toward universal access for low-income Americans, South Dakota signals the end of a protracted battle that has added 17 million low-income Americans to the insurance rolls but has fallen short of reaching every state. Some 4 million Americans — about half of whom live in Florida and Texas — still fall into a coverage gap, according to the Kaiser Family Foundation.

“The lower-hanging fruit has been picked on that strategy,” said Joan Alker, executive director of the Center for Children and Families and a research professor at the Georgetown McCourt School of Public Policy. “The ballot path is coming to the end.”

In Florida, a Medicaid expansion ballot measure remains a possibility, though the state’s 60 percent voter approval threshold makes the prospect of doing so challenging, as does the cost of running a campaign in the nation’s third-most populous state. In Mississippi, the state Supreme Court in 2021 quashed a nascent expansion effort when it effectively declared the entire ballot initiative process unconstitutional. And in Wyoming, expansion advocates are pressing to pass the policy legislatively, rather than at the ballot box.

Many Democratic policymakers have for years thought that the deal — having the federal government pay nearly the entire cost of health insurance — would be too good to refuse, but a handful of GOP-controlled states remained opposed, prompting proponents to take Medicaid expansion to voters.

Maine voted to expand Medicaid in 2017; Idaho, Nebraska and Utah did so in 2018; and Missouri and Oklahoma followed suit in 2020. Of those, Oklahoma’s measure passed by the narrowest margin — 50.5 percent support — while Idaho’s passed in 2018 with an overwhelming 60.6 percent of votes.

“We’re feeling the energy here on the ground, and obviously we’re excited by the fact that we have this broad coalition of organizations and supporters who are working to engage their membership, and engage volunteers and voters and adding to it all the time,” Zach Marcus, campaign manager for South Dakotans Decide Health Care, the coalition backing the ballot measure, told POLITICO. “We’re working hard, but we’re feeling confident.”

Under the American Rescue Plan, which President Joe Biden signed in 2021, Congress incentivized states to expand Medicaid by having the federal government cover an extra 5 percent of the costs of the program — on top of covering 90 percent of costs for the newly eligible population.

The additional incentives would send $110 million to South Dakota, offsetting $50 million in state costs, according to an analysis from the Kaiser Family Foundation.

Medicaid expansion opponents, including Republican Gov. Kristi Noem, argue the proposal would be costly to the state in the future, would force the state to raise taxes and would discourage able-bodied adults from securing well-paying jobs with benefits. In South Dakota, the Foundation for Government Accountability, the Family Heritage Alliance and the South Dakota Farm Bureau are opposing the measure.

Opponents also tried to make it harder for the ballot measure to pass, asking voters in June to raise the threshold for approval to 60 percent, but that effort was soundly defeated, meaning Medicaid expansion only needs 50 percent support to pass.

Keith Moore, state director for Americans for Prosperity South Dakota, said the groups will spend the next few weeks knocking on doors, making phone calls, putting out digital and paper ads, and releasing op-eds against the measure. But he acknowledged it’ll be a difficult fight.

“It certainly feels like an uphill climb,” Moore said. “But, like we said from the beginning, we all knew that. That doesn’t mean obviously that we shouldn’t try.”

Noem has said she would accept expansion if voters approve the measure even while she remains opposed.

“Looking at this measure, it appears to be written constitutionally. So if the people pass it, it’ll be implemented,” Noem said at a gubernatorial debate in September.

The path forward for Medicaid expansion in the eight states without a ballot measure process is less clear.

Republican lawmakers in North Carolina, for instance, appeared to be nearing a deal with Democratic Gov. Roy Cooper to expand Medicaid last month, but have continued to run into snags with hospitals over a state law restricting the facilities’ ability to expand services without permission from the state health department.

In Mississippi, deep-seated hostility toward Medicaid expansion sank a proposal this spring to extend postpartum Medicaid coverage to 12 months after birth — even as legislators tried to draw a bright line between the two distinct policies.

Still, some contend that momentum is on their side and it’s just a matter of time before all states expand the program.

“At the end of the day, I do believe all states are going to pick this up, it’s just a question of how many years it takes,” Alker said. “All of the doom-and-gloom predictions by opponents of Medicaid expansion have not come to pass. When you’re in a situation where 40 states are already doing it, it’s hard to continue making those same kinds of arguments with a straight face.”

Clusters of galaxies easier to view with radio X-ray combination