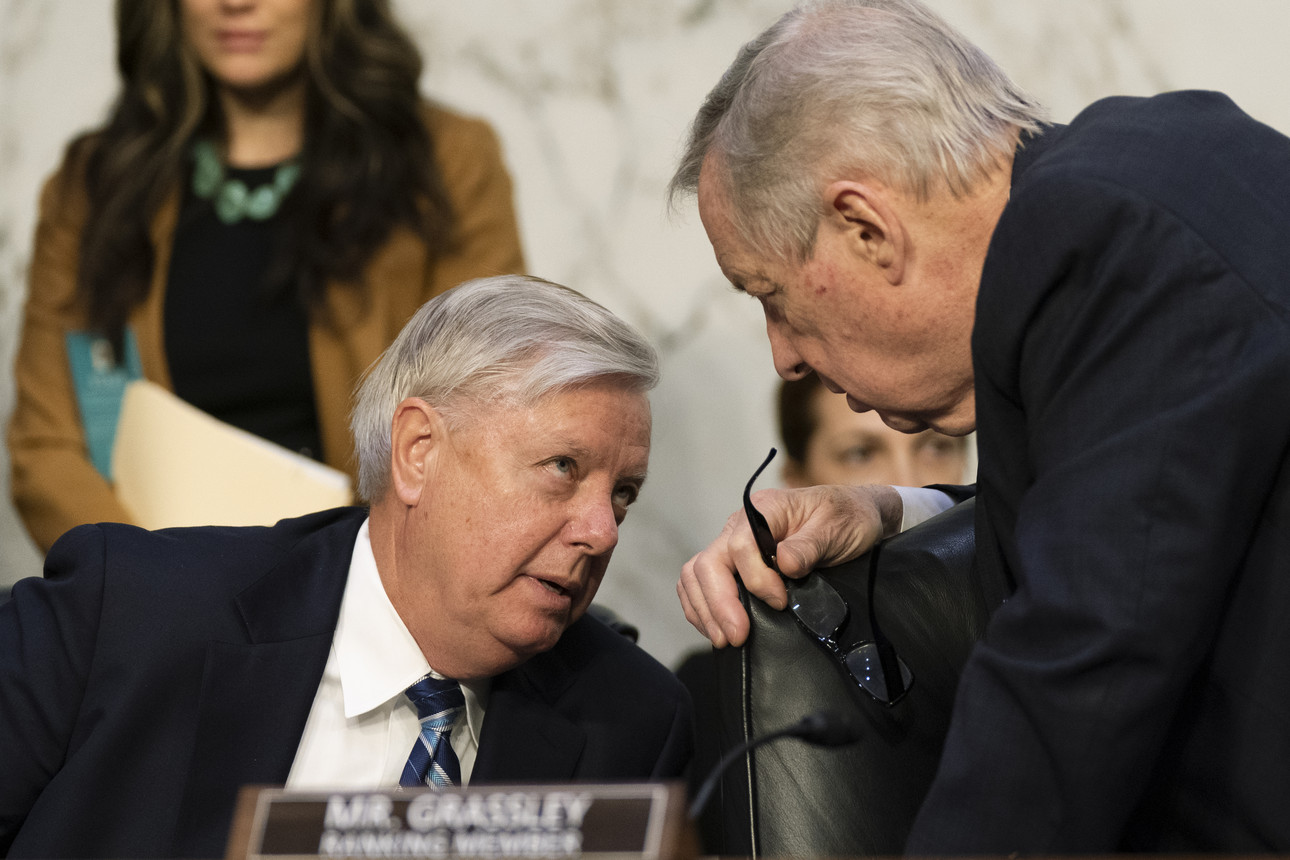 Much of the environment in the Senate Judiciary Committee will depend on the tone between Judiciary Chair Dick Durbin (D-Ill.) and the panel's incoming top Republican, former chair Sen. Lindsey Graham of South Carolina. | Manuel Balce Ceneta/AP Photo

The Senate starts its work in earnest this week, and things may look a lot different at the famed committee known for contentious Supreme Court fights that have raised the profiles of many presidential hopefuls.

With Democrats now set to hold an actual majority, the Judiciary Committee will no longer rely on GOP cooperation to advance President Joe Biden’s picks for the federal bench — and gone are the days of required extra votes to get judges to the floor. On top of that clearer confirmation conveyor belt, which will help Biden put his stamp on the judiciary more quickly, its 51-seat majority gives Biden’s party subpoena power.

And with at least two GOP senators on the committee saying they will pass on 2024 presidential bids, that adds up to a Judiciary panel that could find itself defying its typical type this Congress and looking almost ho-hum.

Sen. Thom Tillis (R-N.C.), a member of Judiciary, predicted that at least for his intellectual property subcommittee, “there’s not going to be as much sparring there as long as the Democrats hold their votes.”

“It’s going to be very difficult” for Republicans to influence the committee results given the Democrats’ “structural majority,” Tillis said. “There are some that are going to do it, but then you have to ask why, in terms of a vote outcome.”

Of course, that dynamic could change, and would shift instantly if a Supreme Court vacancy arises. The recent confirmations of Justices Ketanji Brown Jackson, Amy Coney Barrett and Brett Kavanaugh each served as high-water marks of partisan bitterness for the committee. And much of the environment will depend on the tone between Judiciary Chair Dick Durbin (D-Ill.) and the panel’s incoming top Republican, former chair Sen. Lindsey Graham of South Carolina.

Durbin said in a brief interview that he and Graham have a “good relationship.” Both have teamed up on bipartisan legislation to provide a pathway to citizenship for undocumented immigrants who came to the United States as children, even as Graham pushes for a tougher border policy. (An ally of former President Donald Trump, Graham has also had his fair share of battles with the panel’s Democrats, accusing them in 2018 of wanting to “destroy” Kavanaugh.)

As for the panel as a whole, Durbin said it won’t just be a rubber stamp for judges this Congress and cited oversight of drug policy as one area of potential focus.

“I hope that we are as productive when it comes to judicial nominees, but we’re also going to take the oversight role very seriously,” Durbin said. “To restore the reputation of the committee, we have to have meaningful oversight even of your own party’s administration. And there’s so many issues that come at us in so many different directions.”

Senate committees have yet to finalize how many members will sit on each panel, and if any senators will be added or removed. Subcommittee gavels are also up in the air, though that committee assignment process is expected to wrap as soon as this week. And it’s unclear how many members will be using the panel as a launching pad for presidential ambitions, though Sens. Josh Hawley (R-Mo.) and Tom Cotton (R-Ark.) have both disavowed interest in the 2024 race.

Democratic committee aides highlight some bipartisan successes from the last Congress, including legislation that eliminated the use of forced arbitration for victims of alleged sexual assault and harassment in the workplace. But other priorities, like changes to the immigration or criminal justice system, stalled out despite Democrats’ full control of Washington.

Getting anything related to those policy areas through Congress will only be more difficult this term, given the GOP-controlled House.

Democratic committee aides, in interviews, cited the reauthorization of surveillance law intended to gather electronic communication of foreign targets as one policy area that they’ll need to address — a topic that may well cause partisan sparks given House Republicans’ emerging divisions about their own plans to try to overhaul the law.

One GOP aide, speaking on condition of anonymity, suggested that a handful of bills that passed the Senate unanimously last year but stalled in the House, including a bill to aid first responders with post traumatic stress disorder, could get through this Congress.

The committee is also expected to continue examining Trump’s efforts to pressure the Justice Department in the leadup to the 2020 election and the Jan. 6 attack on the Capitol.

Meanwhile, Sen. Sheldon Whitehouse (D-R.I.) said the courts subcommittee he’s led would “continue to look very hard and very consistently at all the ethics failures and gaps at the Supreme Court,” including potentially bringing in a clerical worker to explain the process for when the high court receives an ethics complaint.

Yet even as the Judiciary Committee plans oversight hearings, including this week’s hearing on Ticketmaster’s Taylor Swift ticket-sales debacle, Democrats are still ramping up their attention on judges.

The panel ended the last Congress with 39 judicial nominees who got committee hearings without winning confirmation. Those judicial picks, 25 of whom have already been renominated by the Biden administration, will need committee approval before reaching the Senate floor.

And the limited legislative agenda that’s typical of divided government will inherently allow more floor time for judicial nominees. From 2019 to 2020, when Democrats controlled the House and Republicans controlled the Senate, the upper chamber confirmed 145 district and circuit judges and one Supreme Court justice. Democrats are also benefiting from a 2019 GOP rules change that cut down the debate time for district court nominees.

“We’ll once again set a record in terms of the number of qualified judicial nominees we’ll confirm,” predicted Sen. Chris Coons (D-Del.), a member of the panel.

Despite outpacing Trump on judicial confirmations in the last Congress, Democrats are facing calls from outside progressive groups to go further by tossing so-called “blue slips,” which grant home-state senators veto power over district court nominees. The liberal group Demand Justice has underscored that most of the current district court vacancies lacking nominees are situated in red states.

“The number one reason that the pace of confirmations will slow down is Republican blue slips,” said Chris Kang, chief counsel of Demand Justice. “One of the challenges in the Obama administration was that Republican senators would obstruct by delay. And at some point the clock will run out on even this two-year Congress.”

A Democratic Judiciary committee aide, speaking on condition of anonymity, described calls to get rid of the blue slip as “premature.”

Mike Davis, founder and president of the conservative Article III Project, acknowledged that Republican senators may not be “very eager to negotiate with the Biden White House [on] judges” given that “they can just wait two years” for a potential change in administration. Yet some say they’re willing to work with the Biden team.

Sen. John Cornyn (R-Texas), a member of the committee, said in a statement that he looked forward to working with Sen. Ted Cruz (R-Texas) and the White House “to ensure Texas continues to have top-notch federal judges.”

Jordain Carney contributed to this report.