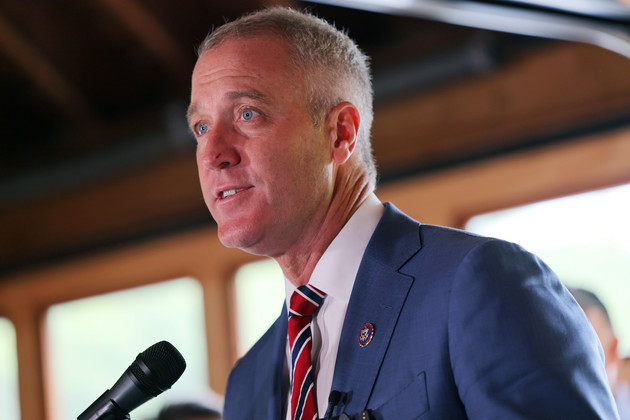 Maloney, a prolific fundraiser, has already purchased over $2 million of TV ads, including some broadcast spots. | Michael M. Santiago/Getty Images

A Democratic super PAC is beginning to mount a rescue mission for the party’s beleaguered House campaigns chief.

Our Hudson PAC, a group that formed in July to aid Rep. Sean Patrick Maloney (D-N.Y.) in his summertime primary, is the first Democratic outside spender to jump into his narrowing race against GOP state legislator Michael Lawler. Maloney’s newly redrawn district in the lower part of Hudson Valley has quickly become a top GOP target, with House Minority Leader Kevin McCarthy’s aligned super PAC dumping $4 million of broadcast TV ads into the race this week.

The deluge of cash — along with some tightening polls — have made some Maloney allies uneasy for the first time about his fate.

Our Hudson quietly reported spending $140,000 on ads targeting Lawler late last week and began to make small cable TV buys in the district on Monday and Tuesday, according to data from AdImpact, a media tracking firm.

Republicans have long planned to zero in on Maloney, who holds a district that President Joe Biden won by 10 points in 2020. But the McCarthy-aligned Congressional Leadership Fund upped the ante Monday by placing a pro-Lawler broadcast buy in the exorbitantly expensive New York City media market.

The sum stunned Democrats who now privately acknowledge that their campaign chair will need additional aid to fend off the GOP attack ad. Given the delicate situation for an already-cash-strapped Democratic Party, it’s unclear yet if the DCCC or its top ally, House Majority PAC, will answer the spending by the McCarthy-linked super PAC.

Maloney, a prolific fundraiser, has already purchased over $2 million of TV ads, including some broadcast spots. In comparison, Lawler has only spent roughly $380,000. Because candidates purchase air time at cheaper rates than outside groups, Maloney can help himself combat the GOP super PAC’s spending for a while — but probably not indefinitely.

Maloney, a battle-tested Democrat who’s easily won reelections since 2012 in a red-tinted district, angered colleagues in May by bigfooting fellow Democratic Rep. Mondaire Jones out of his most likely home district. That furor started when a state court threw out the map approved by the Democratic congressional delegation, leaving the redistricting process in chaos.

After a new map was finally put in place, Maloney shocked his party by announcing that he would run in the district most closely resembling Jones’ current one (though that district includes Maloney’s home).

Jones chose to run, and ultimately lost in, a different district in New York City, while Maloney drew a spirited primary challenge from progressive Alessandra Biaggi. Our Hudson PAC formed to help Maloney in that contest and is readying to help him again.

While Maloney’s move left a mark with some Democrats, many also acknowledge his seat is a must-win contest if they have any hope of keeping their House majority — or even just limiting GOP gains.

The origins of Our Hudson PAC were not immediately clear. The treasurer is Christopher Koob, who appears to be a partner at Mele, Brengarth & Associates.