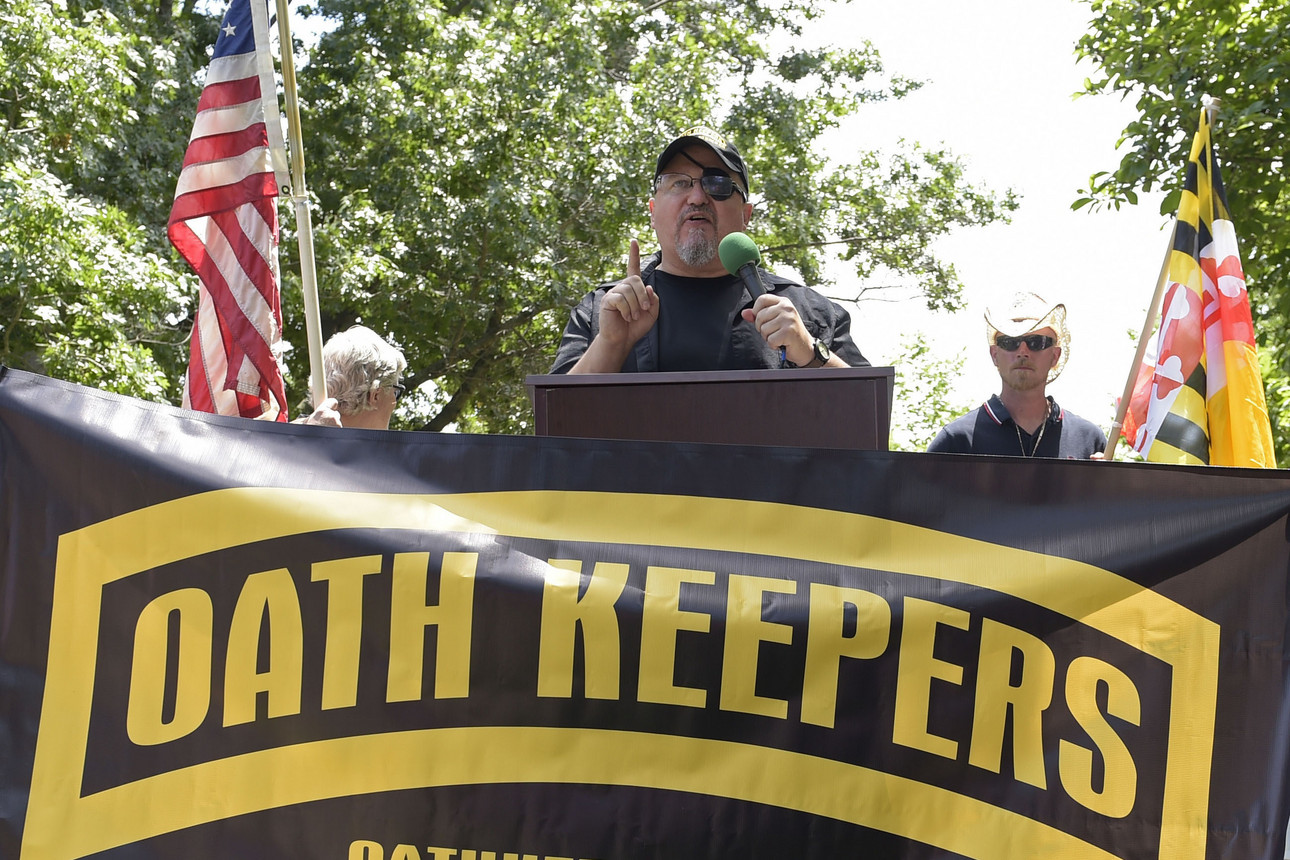 The Justice Department says Stewart Rhodes and his allies prepared for an “armed rebellion” against the government, seeking Trump’s blessing but ultimately pressing ahead without him after Trump did not assert emergency powers. | Susan Walsh/AP Photo

While Donald Trump was frantically trying to extend his presidency despite losing the 2020 election, members of far-right extremist groups were watching, interpreting his moves and even seeking to nudge him toward more draconian measures.

“I have been so busy on back channel working groups trying to advise the President,” Stewart Rhodes, founder of the far-right Oath Keepers, said in a Dec. 30 text to allies, describing efforts to convince Trump to invoke the Civil War-era law known as the Insurrection Act in a bid to remain in office.

Federal prosecutors revealed this message, and dozens of others, in court Friday as they argued that Rhodes and several other Oath Keepers should be convicted of seditious conspiracy — an armed plot to prevent Joe Biden from taking office.

The texts read aloud and shown this week are an early part of the prosecution’s case in a trial that is the first test of the government’s ability to win convictions on the most serious charges leveled in connection with the storming of the Capitol on Jan. 6.

Central to prosecutors’ allegations is Rhodes and, more plainly, what his perceptions were of Trump in those critical moments. The Yale Law-educated Rhodes came to see political and courtroom paths as doomed for keeping Trump in power and the potential invocation of the Insurrection Act as the only viable way. So, the right-wing activist began promoting the Insurrection Act among fellow Oath Keepers, privately and publicly, urging them to also loudly call on Trump to take the extreme step of using the military and citizen militias to remain in office.

But Rhodes also had a backup plan, according to the prosecution. If Trump failed to act, Rhodes said in the messages, the Oath Keepers would be ready to take matters into their own hands — even if it meant a “bloody” Civil War.

The trial, as well as a parallel case prosecutors are building against the leaders of the pro-Trump Proud Boys, underscored the degree to which right wing extremist groups sought to operate in tandem with Trump. Ultimately, the prosecution alleges, they saw validation in his rhetoric as they maneuvered to prevent Joe Biden’s inauguration.

Rhodes’ defense lawyers have suggested that much of his fiery language, particularly in a pair of open letters he addressed to Trump, amounted to little more than hyperbole aimed at fundraising for the Oath Keepers. Ultimately, they note, Rhodes didn’t enter the Capitol on Jan. 6, nor did he bring weapons with him. Instead, he remained just outside the building while the others can be seen on video joining the mob that surged into the building after police lines collapsed.

But Rhodes’ own rhetoric alarmed even some members of his group, at least one of whom passed recordings and tips to the FBI — tips that weren’t acted upon until after Jan. 6. But the Justice Department’s criminal case is primarily built on Rhodes’ own words, in private texts, interviews with friendly podcast hosts and public writings that Rhodes posted to the Oath Keepers website.

Prosecutors highlighted these messages in the first week of their criminal trial against Rhodes and four other Oath Keeper leaders they have charged with seditious conspiracy for their roles in the Jan. 6 attack on the Capitol. The Justice Department says Rhodes and his allies prepared for an “armed rebellion” against the government, seeking Trump’s blessing but ultimately pressing ahead without him after Trump did not assert emergency powers. Those allies, who are also on trial for seditious conspiracy, include four other high-ranking Oath Keepers: Kelly Meggs, Jessica Watkins, Thomas Caldwell and Kenneth Harrelson.

In extensive text chains sent via Signal, an encrypted communications app — in November and December 2020 — Rhodes made his case to dozens of allies that their best bet to keep Trump in power was for Trump to invoke the Insurrection Act.

“Trump has one last chance to act. He must use the insurrection act,” Rhodes wrote in a Dec. 14 message, just hours after members of the Electoral College met in state capitals to cast their votes to elect Biden president.

During the text exchanges, Rhodes zeroed in on Jan. 6, when Congress was slated to meet and count the electoral votes affirming Biden’s victory. That, Rhodes indicated, was a bright-line constitutional deadline.

In the days leading up to the fateful Jan. 6, Rhodes portrayed some kind of a physical clash as inevitable. “He needs to know if he doesn’t do it we will,” Rhodes wrote of Trump in a Dec. 29 message.

While there’s evidence some of Trump’s advisers presented him with proposals to invoke the Insurrection Act, Trump never took that step.

The evidence presented by the prosecution underscores how much information around the Jan. 6 attacks remains unknown, despite extensive congressional and legal inquiries into the actions before and on that day. But it isn’t the only window into how galvanized far right groups were in that moment,

In a separate criminal case, a North Carolina-based leader of the Proud Boys pleaded guilty Thursday to seditious conspiracy for his group’s role related to Jan. 6. In plea paperwork, Jeremy Bertino admitted to preparing to use force to stop the transition of power to Biden and said his group — sometimes seen as more of a rowdy drinking club — had hardened its posture and prepared for violence to keep Trump in office, including against police.

Notably, Bertino had previously testified to the Jan. 6 select committee, telling lawmakers that Proud Boys membership had surged in 2020 after Trump told the group to “stand back and stand by” during a presidential debate.

The Proud Boys, in particular, reacted after Trump tweeted a Dec. 19, 2020 call to supporters to descend on Washington for a “wild” protest against his defeat. Notably, the the tweet came just hours after an Oval Office meeting with outside advisers in which they discussed using the military to support Trump’s effort to stay in power.