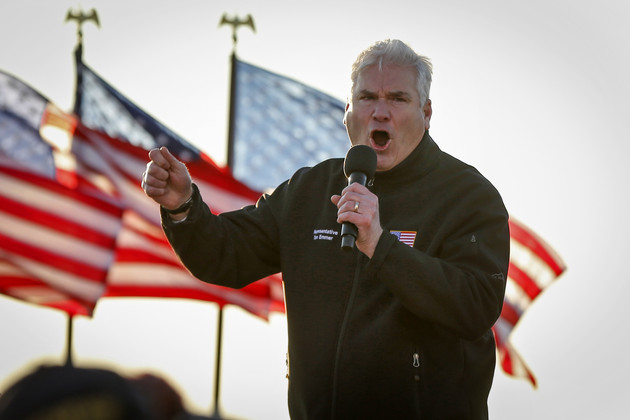 So far, Tucker Carlson has not gone publicly after Tom Emmer. But that could all change in the days leading up to the House GOP leadership vote. | Bruce Kluckhohn/AP Photo

Tom Emmer is stuck in a place no Republican politician wants to be: on the wrong side of Tucker Carlson and Donald Trump Jr.

But some GOP lawmakers believe Emmer’s run-in with the pair of MAGA players — a drama gripping the House Republican Conference — may end up helping him secure one of the most powerful posts in the next Congress.

The saga began a few weeks ago, when the Daily Beast posted a story quoting an anonymous Republican invoking 25-year-old Buckley Carlson, the son of the Fox News host and an aide to Rep. Jim Banks (R-Ind.). Emmer and Banks are battling to become GOP whip if Republicans win the House.

The anonymous Republican suggested that Banks hired Buckley Carlson as communications director to bolster himself with the “Establishment.” While the quote had no clear connection to Emmer, allies of Banks — including Tucker Carlson and Trump Jr. — accused the House GOP’s campaigns chief of authorizing his camp to go after the young aide.

What’s far from clear is whether this finger-pointing, perceived as being on Banks’ behalf, will help or hurt him in the whip race. Some GOP lawmakers are rallying behind the Hoosier, but others are warning that bringing outside party personalities into internal matters could backfire. Still others say the third whip hopeful, current chief deputy whip Rep. Drew Ferguson (R-Ga.), could prove the biggest beneficiary of the flap.

Interviews with more than a dozen House Republicans across the conference’s ideological spectrum reflected a common view that Banks’ allies are using the anonymous quote to take a political shot at Emmer.

“It detracts from his effort. If you look at how Emmer and Ferguson are handling this race, they’re campaigning for a position. Not against each other,” said Rep. Guy Reschenthaler (R-Pa.), an Emmer ally who’s helping him whip votes for what would be the No. 3 leadership post next year if the GOP retakes the House. “And I think members appreciate that.”

Just because multiple House Republicans say they smell a Banks-designed ploy, though, doesn’t mean he won’t get an edge from the brouhaha — even if indirectly. That’s because the fierceness with which Carlson and Trump Jr. pushed back on the anonymous quote showcased Banks’ strength with Trump world.

A significant number of GOP lawmakers, including a handful in the Trump-aligned House Freedom Caucus, shrugged off the quote and the surrounding drama as a non-factor in the race.

“I don’t think members in the conference are going to be swayed by that kind of stuff, those reports,” said Rep. Randy Weber (R-Texas), a Freedom Caucus member who praised the resumes of the three candidates in the race and added that “pretty much everybody’s gonna vote for who they think is the best person.”

Another House Freedom Caucus member, speaking candidly on condition of anonymity about a leadership race that’s not formally underway until after Election Day, put it more bluntly: “It’s designed to hurt Emmer. But it’s transparent, so likely ineffective.”

Yet the pro-Trump group appears divided on the episode’s bigger impact. Rep. Marjorie Taylor Greene (R-Ga.) jumped in to declare herself team Buckley Carlson, and two other Freedom Caucus members said Trump world’s alignment against Emmer reinforced their sense that Banks is the right choice for whip.

For some House Republicans of all persuasions who remain undecided, the kerfuffle underscored concerns about Banks: that he would sic Trump world on any member who clashes with him and his allies have distracted the conference from the midterms. Others simply suggested the pulse of the conference is moving away from the ex-president so the Trump world ties aren’t as important as they once were.

The members who saw it as a political move felt bolstered by another connection they saw between Banks and Trump world: Andy Surabian, a close Trump Jr. ally who also works for House Minority Leader Kevin McCarthy, was recently hired to work on Banks’ new super PAC.

“It was meant to hurt [Emmer] … It may have helped him,” said one senior House Republican, who pointed to various times Tucker Carlson has created headaches for the Republican conference, like his take on the Ukraine invasion as well as legislation related to a Covid vaccine database.

Other members passionately disputed this view, arguing that Trump and his top allies are still major figures in their party and that maintaining inroads with Trump world remains important — and doing so benefits Banks.

And close allies of Trump Jr. also emphasized that his dislike of Emmer wasn’t triggered so much as escalated by the anonymous quote.

Rather, his souring view toward Emmer dates back to the National Republican Congressional Committee chair’s refusal to endorse Harriet Hageman in the Wyoming primary against incumbent Rep. Liz Cheney (R-Wyo.), a House GOP persona-non-grata over her Trump criticisms and role on the Jan. 6 select committee. The NRCC typically doesn’t get involved in primaries, though some argued Cheney’s was a special case.

Still, some members predicted Banks showcasing his strength with Trump world could counteract conference annoyance over the fracas — because some see an advantage in having a whip that could shield the more moderate lawmakers and other members of leadership from public attacks from the right. After all, Carlson has gone after GOP leader Kevin McCarthy, Conference Chair Elise Stefanik (R-N.Y.), and others in the party.

Most members who say they won’t support Emmer continued to point to other reasons, like his voting record on social bills, including voting with Democrats and dozens of other Republicans to protect same-sex and interracial marriage. That vote wasn’t received well by the right wing of the party. A Freedom Caucus member supporting Banks said that “reinforced a concern” about Emmer’s conservative bona fides, in addition to his previous work for a group that pushed to abolish the electoral college.

So far, Tucker Carlson has not gone publicly after Emmer. But that could all change in the days leading up to the House GOP leadership vote — or even after. Some House Republicans said if the most powerful name in conservative media had a personal motivation to go after their No. 3 each week, wreaking havoc on both Emmer and the conference while he tried to whip votes, it would be a problem they’d consider.

But Weber also shrugged off the idea that an airwave assault by Tucker Carlson would make a significant difference: “Whether [Tucker] going after another member is going to be of much concern to anybody? I wouldn’t think so.”

The race will quickly after the election, when candidates are expected to roll out various endorsements as they try to build momentum heading into the leadership vote on Nov. 15.

But with new battle lines drawn, some viewed it as a loss for both Banks and Emmer. Multiple members said Ferguson may be able to emerge from the smoke unscathed and win more support as the drama-free candidate.

As one House Republican, who remains undecided on the whip race, put it: “All of a sudden, you have Ferguson looking like that flower that is blooming away from all this.”