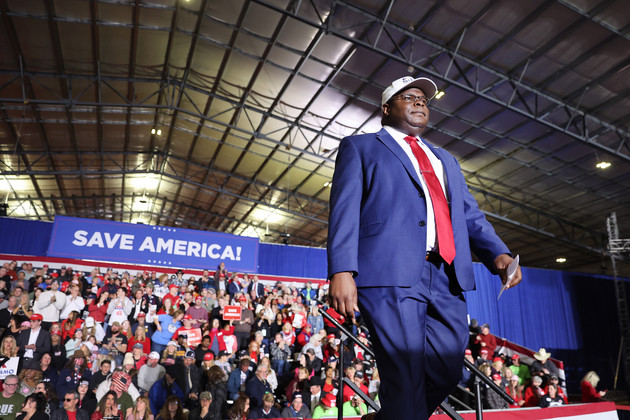 GRAND RAPIDS, Mich. — John Gibbs is a Harvard- and Stanford-educated computer scientist and Christian missionary. He is also a pro-Trump conservative who years ago suggested that women should not have the right to vote, referenced conspiracy theories that a prominent Democrat participated in Satanic rituals and mused that the lost city of Atlantis might be buried beneath the North Pole.

Whether Gibbs, a Republican congressional candidate, can sell the first version to swing voters will determine whether his party holds onto this hotly contested battleground district — and how big a potential Republican House majority could be.

He is part of a slate of controversial GOP House nominees testing what voters are willing to stomach as they vent backlash over the economy against Democratic majorities in Congress. Swing-seat matchups in several states include GOP candidates who have appeared to endorse fringe conspiracy theories, deny the validity of the 2020 election or have a pattern of questionable statements or internet postings.

They could threaten the gains Republicans can make this fall — or, potentially, have their views among those that shape a future Republican House majority.

For some, the post-primary campaign has been an exercise in extensive rebranding. Many of Gibbs’ problematic writings were posted over two decades ago.

“People should look at me right now. Look at reality. Look at my staff, my campaign. Look at my mom and my videos,” Gibbs said, pointing to his TV ad where his mom gushes about his humility and honesty. Then, he said, voters will “quickly realize that things that have been thrown out there are not true.”

“They’re trying to take something someone said X number of years ago and make it seem like they’re a bad person,” he added.

Once a GOP stronghold represented by former President Gerald Ford, the seat Gibbs seeks is now one of Democrats’ best pickup opportunities in the country. President Joe Biden carried it by nearly 9 points in 2020. A win would offer redemption for House Democrats’ campaign arm, which drew biting criticism for meddling in the Republican primary to boost Gibbs, an election denier, over incumbent Rep. Peter Meijer, who bucked his party to acknowledge the legitimacy of the 2020 election and voted to impeach Trump in 2021.

Few GOP candidates have compiled as massive an online record as Gibbs — which Democratic opponent Hillary Scholten and her allies have used to her advantage. They are also highlighting his opposition to abortion rights, even in cases of rape or incest, and saying he endorsed a plan to eliminate Social Security (which Gibbs denies).

National Republicans are still airing TV ads for Gibbs, hoping that voters overlook his controversial comments amid their discontent about the economy. But internal polling from both parties shows Democrats have an advantage and Scholten, an immigration attorney, has significantly outraised him.

“He’s just an extreme of what’s happened to the Republican party. He’s an extreme example of it,” said Democratic Rep. Dan Kildee, who represents Flint, Mich. “Some of his past positions that he’s now trying to get himself away from don’t fit in the 21st century, let alone the 20th century in America.”

Gibbs has struck a decidedly different tone as he campaigns for swing voters. After staking a primary bid on fealty to Donald Trump, he now stresses that the race should not be a referendum on the former president: “He’s not on the ballot. I’m on the ballot.”

He still believes the 2020 election result is “mathematically impossible” but now focuses more on rising costs, mentioning gas prices some 20 times in an interview this month in his campaign office. Grocery bills garnered another 10 mentions.

And as Scholten and her allies point voters toward sexist diatribes that Gibbs wrote two decades ago in college, he has deployed his mom in a TV ad and on the campaign trail.

“We just wanted to show that side of me and show a fun quirky side,” he said. “People love that. Everywhere I go with my mom. I mean, everywhere when she’s here, people come up and say, ‘Oh I love your ad.’”

His mother has been a formidable presence on the campaign trail. Walking across a field of tailgaters shortly before Grand Valley State University’s homecoming football game this month, Gibbs and mother were greeted warmly by several people who had seen the ad. A half-dozen groups stopped to pose for pictures.

Gibbs, wearing his campaign t-shirt over a button-down, politely recited his resume to students and alumni and told them he would be laser-focused on lowering prices. His mother gently goaded them to “vote John Gibbs”.

Democrats are concerned by what they see as a pivot by Gibbs, and they warn that he is an extremist masquerading as a common-sense candidate to dupe voters.

“There is an overwhelming mission to roll back women’s rights and reproductive rights,” Scholten said this month while knocking doors in Grand Rapids. “I am not an alarmist by nature, but if we don’t wake up and take their word, we are going to be in a truly dangerous situation in very short order.”

And, with Gibbs, Democrats say they are pointing to a pattern. He has left a trail of commentary on all corners of the Internet, especially in the late 1990s and early 2000s.

Some have been odd but benign, even amusing. In one online forum in 1998, Gibbs asked if the city of Atlantis “could be burried (sic) underneath the North Polar ice cap” and floated the possibility that it might been “a dominant root culture” that influenced Egyptians, South Americans and South Asian civilizations.

Other musings have caused greater offense.

His nomination to lead the Office of Personnel Management was derailed in 2020 after conspiratorial tweets he wrote years earlier resurfaced. Gibbs referenced a debunked conspiracy that claimed Democratic strategist John Podesta took part in a Satanic ritual, using the hashtag #SpiritCooking.

Several weeks after Gibbs beat Meijer, the scion of a Midwest grocery dynasty, in an August primary, CNN revealed revealed Gibbs founded a “think tank” while at Stanford that suggested women did not “posess (sic) the characteristics necessary to govern” and that the United States had “suffered” after the 19th Amendment. A Democratic super PAC seized on it, airing a TV ad featuring young women reading Gibbs’ direct quotes.

Gibbs has described his comment as satire, instead pointing to his record of hiring women for his campaign and his mother’s long career at the Michigan Department of Transportation. He has argued that he should not be held accountable for what he said in jest long ago.

“I like trolling a little bit, but I guess maybe I’m the first person in history who said something over the top in college,” Gibbs said in an attempt to brush off his comments.

“What has he done to show that he does not believe that?” Scholten said. “Why should we take this man’s word for it when he’s been so willing to lie about the results of the 2020 election?

“He’s got a lot of work to do rehabilitating himself with women,” she added.

There have been other instances in which Gibbs has referred to women in misogynistic terms. In a blog post from 2007 — accessed via an Internet archive — Gibbs suggested that the U.S. was not a position to lecture Saudi Arabia on “what’s best for women” because American women have “widespread STDs” and millions “are on anti-depressants, are seeing therapists, and have low self-esteem.” In another post, he wrote that British women “look better and seem less manly/aggressive than ours.”

“I guess that old European sense of being ladylike still remains a little, as opposed to the tough frontier attitude and feminist influence we developed here that killed that sense in women,” Gibbs wrote in 2007.

In a statement, the Gibbs campaign said Scholten was trying to distract from important issues by focusing “her entire campaign on false attacks on John from internet posts at the age of 19, over 20 years ago while he attended Stanford.”

“Gibbs’ actions speak for themselves,” his campaign said in a statement. “He works with women, speaks highly of them, and never hesitates to credit his mother, a woman who worked outside the home for years, for his success.”

Gibbs’ prolific trove of Internet posts are unique, but other nominees with baggage have hampered Republicans’ chances in places like Ohio, Nevada and North Carolina. While on the whole, the Republicans’ class of 2022 recruits have been more diverse than in years past, they are still grappling with some problematic candidates, though not enough to endanger their path to the majority.

J.R. Majewski, a candidate for an Ohio battleground, shared pro-QAnon postings. But he lost support from national Republicans when he misrepresented his military experience, claiming that he had served in Afghanistan. Sam Peters, the GOP nominee challenging Rep. Steven Horsford (D-Nev.), has also used QAnon hashtags in a tweet.

Majewski later said he was not a follower of QAnon, a posture adopted by several members of Congress who flirted with the conspiracy theory before they were elected, including Reps. Mayra Flores (R-Texas), Lauren Boebert (R-Colo.) and Marjorie Taylor Greene (R-Ga.).

In eastern North Carolina, Democrats are airing ads highlighting Sandy Smith’s alleged record of domestic violence against her husbands and her daughter. She also suggested anyone found guilty of election fraud should be “executed.”

And in a Washington State district, Democrats are running late TV ads against Joe Kent, a candidate who beat GOP Rep. Jaime Herrera Beutler in a primary after she voted to impeach Trump in 2021. Kent hired a campaign consultant associated with a white nationalist group, and national Democrats now view the district as a rare pickup opportunity, despite its red hue.

Still, any of these candidates can still prevail, especially as economic woes weigh heavily on voters and the environment surges against Democrats.

But in West Michigan, at least, Gibbs’ past appears to be complicating his ability to pick up some voters in the middle. Scholten has carefully courted independents and even some Republicans, releasing an ad featuring GOP officials supporting her campaign.

She’s been willing to criticize Biden or her own party, urging Democrats to “stop the spending” in a recent TV ad. She also said she found Biden’s action on student loan relief “frustrating” and that she had concerns about federal vaccine mandates and the Afghanistan withdrawal.

That has earned her at least some crossover votes, including Field Reichardt, a one-time GOP congressional candidate, who attended a fundraiser last week for Scholten headlined by Sen. Gary Peters at a mansion on the shores of Lake Michigan.

After backing Meijer in the primary, he switched to Scholten, praising her as a “centrist” and “balanced” candidate.

“He’s so out there in never never land,” Reichardt said of Gibbs. “Moderate Republicans are probably going to be voting for Hillary.”

Sarah Ferris contributed to this report.