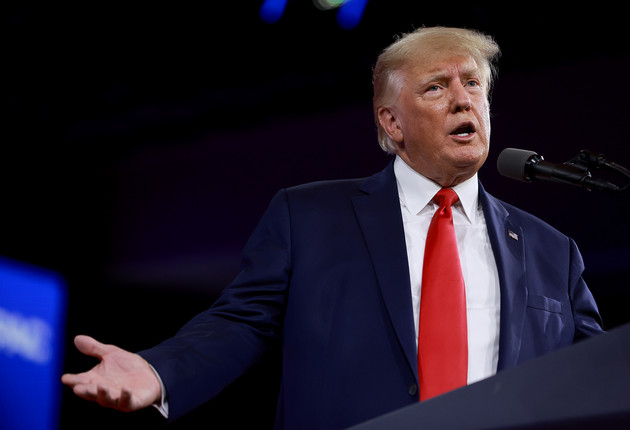 The current issues facing Donald Trump are different in critical ways. For starters, he doesn’t have the powers of the presidency anymore. | Joe Raedle/Getty Images

The investigation into Donald Trump’s handling of classified national security records is forcing Republicans into a strained defense during a pre-midterm sprint in which they’d much rather be talking about Joe Biden.

After having decried the FBI’s search of the ex-president’s home, many Trump defenders went silent upon the release on Friday of the probable-cause affidavit that revealed the extent of Trump’s efforts to hold onto the top-secret documents. GOP worries about the developments of the case and Trump announcing a 2024 run before November are giving way to a subtle, broader warning about putting the former president too much on the ballot this fall.

“Republicans should focus on defeating Democrats, and every Democrat should have the word Biden in front of their name,” said Trump ally and former Republican Speaker Newt Gingrich. “The Republican focus should be to win the election in November. Trump will do a fine job defending himself. He’ll be fine.”

Some top Republicans acknowledge the growing angst and concern, as it’s become clearer that Trump may have been warehousing some of America’s most sensitive secrets in an unsecured basement — and even refused to turn them over when the National Archives and Justice Department tried to recover them. One top Republican fundraiser asked to describe the mood among donors, said, “There is enormous frustration.”

“The question is, is there willingness to express that frustration,” the fundraiser added. “I don’t know the answer to that. But there is real frustration, and with the exception of people who are too stupid to understand the need to be frustrated, it is nearly universal.”

Strained defenses and private frustrations are familiar emotions for some Republicans during the Trump era. But the stakes are particularly high this fall, with projections of a red wave in the House getting dimmed to a smaller GOP majority and as Sen. Chuck Schumer appears potentially poised to remain in control of the Senate.

In interviews, some GOP operatives insisted that there was a “been-there, done-that” feeling to the current news cycle. David Kochel, a longtime Iowa operative and a critic of the former president, said that’s why he would “always counsel for more caution.” He felt the GOP’s response was rooted in the conviction that media coverage of Trump was inherently over-torqued.

“After five years of this,” he said, “I think a lot of these Republican members are sick of it all and just punch back. It’s Pavlovian at this point. They punch back at the media who they think is always unfair to Trump and none of these things are as bad as they’re made out to be in the press. They’re not going to frog march him out of Mar-a-Lago.”

But the current issues facing Trump are also different in critical ways. For starters, he doesn’t have the powers of the presidency anymore. And, more uncharacteristically, he’s so far avoided the spotlight.

In the weeks since the search of Mar-a-Lago, the former president has been off the airwaves, even eschewing appearances on friendly shows. Instead, he’s blasted out self-defenses on his social media site Truth Social and through his Save America super PAC.

The more he speaks for himself, however, the more political headaches he creates for Republicans. On Monday, he bluntly proposed that he be crowned the “rightful winner” of a 2020 election fairly won by Biden, or that a determination be made that the ballot was “irreparably compromised.” He suggested a do-over of the election in the case of the latter.

Trump is expected to address the FBI search at his first public appearance for a Saturday Save America rally in support of endorsed candidates in Scranton, Pa. this coming weekend.

“I think people would expect him to go on Fox, go on radio shows, go on primetime shows, Newsmax, OAN, one on one interviews, and do a media blitz,” said one person close to the Trump operation. “He’s not doing media, but the surrogates are out there, the lawyers are out there, which is smart from a legal standpoint.”

When news first broke that the FBI had gone into Trump’s Mar-a-Lago home, many Republicans called it a politically motivated witch hunt. But on Capitol Hill, at least, Trump’s backers are starting to climb down from their initial anti-FBI clamor and offering a hodgepodge of potential explanations as more details of the investigation emerge.

Trump’s warehousing of highly classified records at Mar-a-Lago was fine because the estate is secure, some defenders said. Others said the FBI search was simply a distraction from inflation and gas prices.

Ohio Rep. Mike Turner, the top Republican on the House Intelligence Committee, contended on Fox News that the search stemmed from classified documents handling closer to “a bookkeeping issue than a national security threat.” Sen. Ron Johnson (R-Wis.), who’s facing a stiff reelection challenge this fall, argued that “there was probably far greater danger to national security based on what Hillary Clinton did.”

Like Johnson, many Republicans pointed to Trump’s 2016 opponent, who was investigated for retaining classified records on a private email server but ultimately not prosecuted after the FBI indicated her case lacked the typical aggravating factors common in Espionage Act cases. Johnson’s remarks also seemed to ignore recent reports of unauthorized individuals gaining access to Mar-a-Lago — even to Trump personally.

Other Republicans, however, have moved subtly away from defending Trump to warning about what might come if — as is increasingly suspected — he is indicted. Sen. Lindsey Graham (R-S.C.), who’s fending off efforts to testify in another Trump-related probe, warned on Fox News that any “prosecution of Donald Trump for mishandling classified information” would ultimately result in “riots in the streets.”

In the background is Trump himself, demanding fealty from Republicans, declaring the U.S. a ”third world” nation and ratcheting up his grievance-fueled attacks on the Justice Department and FBI, all while violent threats against his detractors are on the rise.

And the Republican lawmakers who took to TV to back up Trump this week are senior conference members and close allies. When Congress returns to Washington next month, the entire GOP is in for a bout of 2017 déjà vu with a Capitol press corps that’s bound to fire off Trump questions rather than the Biden-centric themes that the party would rather hit.

Even if the topic were to turn to the Biden administration, the president is coming off a period of rising approval ratings and surprising legislative success while Trump keeps offering relitigations of 2020.

It’s enough to make even some more seasoned GOP incumbents resort to rhetorical gymnastics to put the onus back on the 2020 victor; Sen. Joni Ernst (R-Iowa) on Monday accused the Biden administration of seeking the Mar-a-Lago search warrant simply to hurt the GOP’s chances in November.

“With all of the crises that have happened during this administration, they needed a little bit of a distraction,” Ernst said Monday on Fox News. “And this was [a] prime opportunity for this administration to pounce on President Trump, make it about this raid, rather than about the own problems they have manufactured in the last two years.”

Sam Stein contributed to this report.