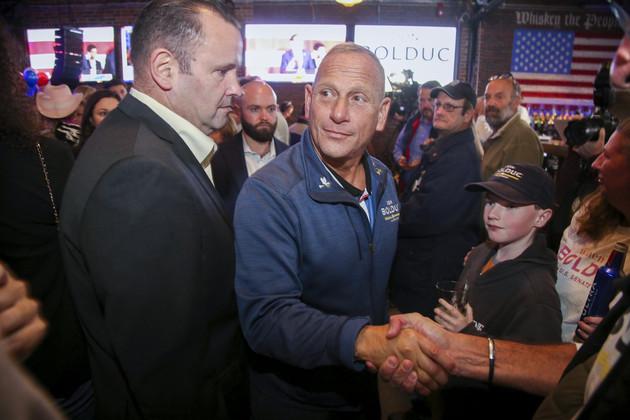 They were candidates who publicly supported Donald Trump’s false claims that he had won the 2020 presidential election. And their denial of Joe Biden’s victory may have contributed to their own defeat.

Dozens of Republican candidates who publicly claimed Trump was robbed of the presidency won their midterm election. But as of Wednesday, dozens of others lost — in races for Congress, governor or other offices. Some also may have directly questioned the counting of Biden’s Electoral College votes, expressed support for a review of ballots post-election or signed onto a lawsuit to overturn the result. And some attended or expressed support for the Jan. 6 attack on the U.S. Capitol.

Their losses in some cases validated a decision by Democratic-aligned groups to spend millions to help them win their GOP primaries, figuring that their far-right status would make them easier to defeat in the general election. Some gubernatorial candidates in this category included Dan Cox in Maryland, Darren Bailey in Illinois and Doug Mastriano in Pennsylvania.

Cox chartered buses to bring supporters to the Jan. 6 insurrection and tweeted “Mike Pence is a traitor” during the riot, while Mastriano, as a state senator, led efforts to overturn the 2020 result. And Bailey called it “appalling” that some GOP leaders wanted Trump to concede the presidency.

Among the biggest election-denying candidates who lost their Senate races were Mehmet Oz in Pennsylvania and Don Bolduc in New Hampshire. Oz recently shifted his stance to say he would have affirmed Biden’s victory after previously declaring “we cannot move on from the 2020 election,” while Bolduc said the election was stolen from Trump — before backtracking in the general election.

The GOP candidates in the three Senate races that hadn’t been called as of Wednesday, and which would determine control of that chamber, have all denied or questioned the 2020 election: Blake Masters in Arizona, Adam Laxalt in Nevada and Herschel Walker in Georgia. Walker is headed to a runoff next month against Democratic Sen. Raphael Warnock.

Further down the ticket, GOP secretary of state candidates who claimed Trump won were defeated in some key states where Biden won in 2020, including Kristina Karamo in Michigan, Kim Crockett in Minnesota and Audrey Mendonca-Trujillo in New Mexico.

These once-obscure offices have been on the front lines of politics for two years, after Trump tried to sway state election officers to subvert the results of the 2020 election.

Some of the candidates most vocal about the 2020 race remain in unsettled races, including Arizona’s gubernatorial candidate Kari Lake and its secretary of state nominee, Mark Finchem.

Lake has said she wouldn’t have certified the 2020 election results and has called for her opponent, Democratic Secretary of State Katie Hobbs, to go to jail for doing so. Finchem wants to give his state’s Republican-led Legislature the authority to reject election results. Also still up for grabs is Nevada’s closely watched secretary of state race, where Republican Jim Marchant has promised to decertify the 2020 result there.

Overall, the results suggest that Democrats’ strategy of portraying Republicans as threats to democracy has paid off, as the issue competed for voters’ attention with sky-high inflation, rising crime and abortion access.

Biden touted that success Wednesday during a news conference.

“The American people have spoken and proven once again democracy is who we are,” he said.

The following is a list of other election deniers who lost, as of Wednesday, in Senate, House and governors races.

GOP still has inside track to House majority despite Dem gains